I had wondered whether the slow-drip release of World of Warcraft Classic this week would dampen enthusiasm for other games’ rogue servers and progression servers, but it doesn’t seem to have affected City of Heroes’ Homecoming servers at all. In fact, just the opposite, such that the team had to bring a new server online (not a new playable shard, mind you) to handle its now 67000-person playerbase.

“We reached our highest ever concurrent player count of 7950 tonight,” the Homecoming team wrote Saturday, “and found a way to increase CPU power by a considerable amount, which combined with the new server we setup earlier today should provide a smoother playing experience going forward. As always, we’ll still continue to keep an eye on everything.

If you’re a graphs junkie, take a peek at the “live-graphs” channel on the Homecoming Discord; it’s pumping out shard uptime and concurrency in a pretty format – here’s that peak and then the dip when everybody (well, not everybody, clearly) goes to sleep. 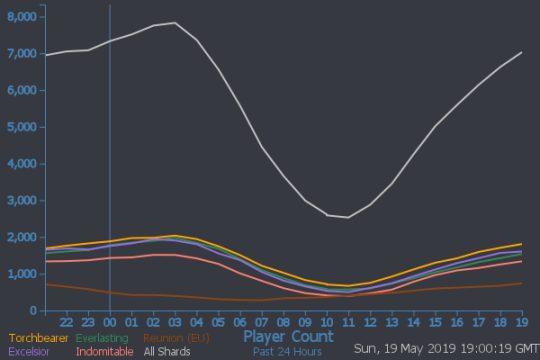 This past Saturday, the original CoH Discord formally launched its own server, Rebirth. This server will run a version of i24, not i25+ like Homecoming, and no wipes are planned, though there are still bugs being worked through right now. Admins are discouraging camping lots of names and are temporarily limiting players to 12 characters; a double experience weekend is planned for the Memorial Day holiday coming up. Signups right here. 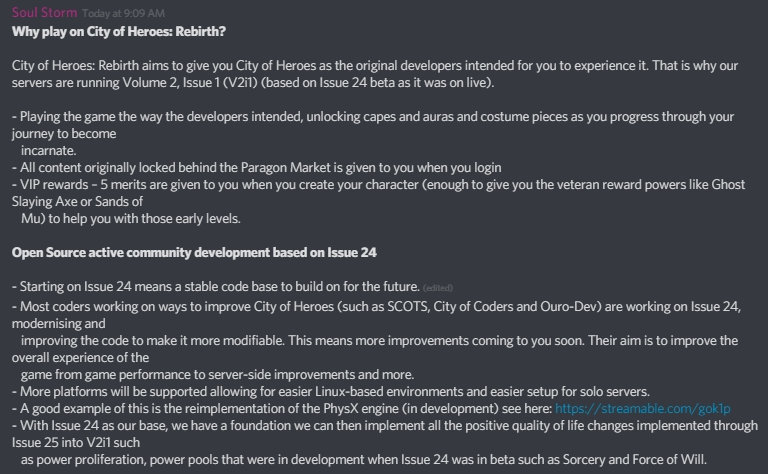 The CoH Reddit Discord assured its community this week that work on its own i24 rogue server – and multiple backup servers, actually – continues. Administrators write that they have put together funding and hardware and will not be asking for donations. The beta was intended to launch this weekend but was delayed briefly. Notably, this version of the game will keep the old Paragon Rewards system from when Paragon Studios took classic City of Heroes free-to-play; however, all players on this server will be flagged VIP and granted plenty of tokens to buy their way up the chain. Here’s last night’s update; we’ll update with more when it’s live.

Full Frontal Nerdity is somehow a comic I’ve never heard of, but I like it already: Its May 16th edition focuses on the new City of Heroes obsession. I feel very seen right now!

Finally, back to Homecoming for one last bit: If you’re into housing and building design in MMOs, you should definitely whip up a supergroup and play around with the tools. Everything on those particular servers has been made free to build with, and it sounds as if the team has plans to develop the system much further than Paragon Studios ever did. [Thanks, Edge_Case!]

COH BASE BUILDING Basics (more will be added as requested)

Got City of Heroes community news you think we should cover? Drop us a note!
Confused about the City of Heroes rogue servers? Our extensive coverage can be found right here. The short version is that this spring a leaker exposed a secret City of Heroes server running for the last six years using the sunsetted game’s original code, which was ultimately turned over to the community. There are now multiple player teams working on multiple public and private servers for the beloved superhero MMORPG, with over 67000 people on Homecoming alone. So far, NCsoft has not commented publicly or taken legal action on any of them, and the company is in talks with players regarding the game’s future.
Advertisement