Two weeks after we first broke the story confirming the City of Heroes secret private server leak, the game has turned 15 years old and over 31,000 people showed up to play over the weekend.

Fam, it’s been a wild ride.

On Friday, the devs behind this particular project, dubbed the Homecoming Team, put up a new server. On Sunday, they put up two more in an attempt to hold all the people desperately trying to play concurrently; these servers are capped at 1500 players, meaning they can hold (and were holding) 8000 players at the same time, with shared chat and auction halls too. According to the devs, over 107,183 toons have been rolled on these servers, with the Brute archetype leading the pack.

The dev team also put in a queue system, and that got ugly fast as the servers came up and crashed again throughout the weekend under the heavy load. In fact, when I peeked in this morning, the servers were still struggling.

If you happen to have the hardware and are interested in putting up a server that works with the Homecoming Team’s cluster, that’s a way to help legitimately; you’ll need “a modern (2014 and newer) processor with at least 64 cores,” “96GB of available memory,” and a “stable connection” that can handle the load. The current setup is apparently costing $4700 monthly and is hosted in Amsterdam.

“Many people have been in touch asking if they can help support us with their hardware or resources,” the team writes. “So far we’ve said no, but we’re reaching the limit of what we’re able to afford on our own. As such, we are now opening the doors for this kind of discussion.”

You may also want to contribute to Project: Ouroboros, which is intended to be the broader community’s open development wiki and resource. “The wiki is being run for i24 development and i25 private server setup for individuals,” a representative told me. (There’s a Discord for it too.)

Worth noting once again is that there’s a lot of misinformation floating around, some intentional and some not. We’ve covered a rash of deliberate disinfo, including faked articles, the hoax that brought down the original server last week, and most recently people impersonating community leaders trying to mislead players into sending them money. Please triple check everything you see and hear about these servers to make sure you’re not being scammed and lied to.

There’s also a group out there without a server up yet, apparently asking for funding; we’ll keep an eye on that as it takes shape before passing more details along. Please be aware that nobody is asking for money for any of the Homecoming servers themselves right now. From the devs:

“The Homecoming servers are currently being funded by a few private individuals, and until we are comfortable about opening up for public donations it will stay that way. From here on out, any discussion relating to any server that is publicly soliciting donations is explicitly not permitted on our forum or our Discord.”

Additionally, there’s a separate group working on Cream Soda, a fork of the Tequila launcher used for Paragon Chat (and other City of Heroes programs), which is intended to be an alternate launcher to Tequila. We spoke with a lead developer on Cream Soda this afternoon; he assured us that his group is working to get the program vetted and that ultimately it will serve as a launcher for multiple projects (though it has only Homecoming right now). Apparently the Reddit Discord server is part of that vetting process, as the head admin there has spoken to us directly about it and in public, expressing a desire for absolute transparency when it comes to the programs recommended to fellow gamers:

Until that vetting is complete, you can get the original version of Tequila from Github.

The Homecoming Team is also now posting in its own Discord (yes, that makes at least six Discords now) and forums, so you can pick up the latest there. We realize that there are a lot of groups coalescing around these projects and splitting off on their own, which is extremely confusing, so just know that as we type this, the only public and accessible servers are through Homecoming unless you wanna build one yourself.

Finally, our stock reminder: These are rogue servers, not technically sanctioned by NCsoft. It is our understanding that negotiations between Titan Network and NCsoft continue on, but it remains unclear whether these shards will be wiped or maintained permanently and how they will be funded long-term.

And Indomitable will apparently be the PvP server. These aren’t requirements, mind you, just an easy way for the communities to stick together if they choose to (in other words, you don’t have to RP on the RP server).

“It’s recently been brought to our attention that the server code we are running still has the same data collection enabled that the live (i24) build had. This includes: Messages sent over all chat channels, Connection IP addresses, Hardware specifications (including CPU, RAM, Graphics card and drivers). This is the exact same data that was being collected when you played on the live version of the game, and the same data that’s collected by almost any online game you play. Regardless, we do not need or want this data. We only discovered this was happening about 30 minutes ago, and we are now immediately taking steps to remedy it. Our goal is to have a small patch deployed within the next 24 hours which should disable all logging, and at that point we will flush any data that has already been collected. If you aren’t comfortable with the above, please do not play the game until we have deployed the patch. We will be making an announcement when that has happened. Thank you for your understanding.”

Just to be clear, accounts themselves will not be wiped – they’re talking about things like chat and IP logs. Here’s some clarification from the original Discord as well as an insinuation that this was not new information for Homecoming and a public request for resolution and transparency: 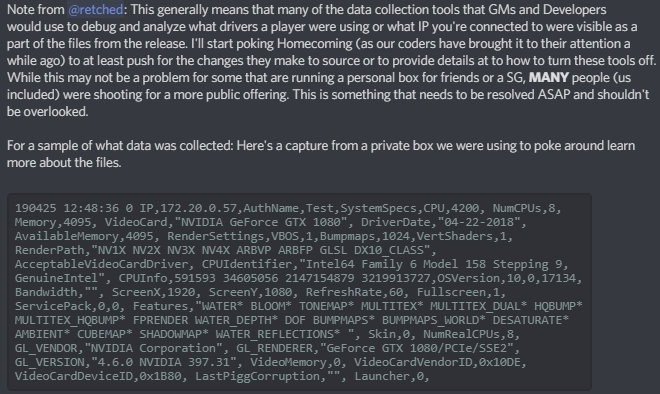 With thanks to our tipsters as well as the team for its speedy response.

Everyone I know reporting about the games industry, every day of their lives. pic.twitter.com/VXVLZufGfH