I’ve always said that if I could do one thing in video games – you know, besides what I already love and do – it’d be play with metrics. (I have no intention of ever doing this – would you, after covering this clusterfudge industry for a decade?!) But longtime readers know that it’s like pulling teeth to get valuable data out of big video game studios. When they do pony up real numbers we can do something with, it’s a rarity.

Rogue servers, however, have no such compunctions. Over the weekend, the City of Heroes Homecoming team posted a detailed breakdown of all the characters created on its five servers since April, looking at everything from the total counts to archetype distribution. Here are some of the highlights: 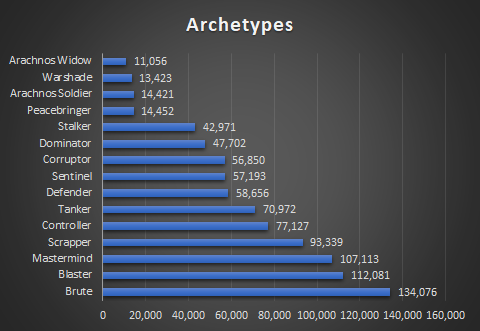 The team breaks it down by powerset combos too, and here’s where it gets really interesting. Would you have guessed that more Blasters roll Dual Pistols than Fire Blast? It’s close, but there it is. Notably:

Want the level 1 characters weeded out of the count? Referring back to the Blasters count, I’ve played Dual Pistols repeatedly and been repeatedly let down, so I’d have guessed most of those toons don’t last because the concept and animations are better than the actual gameplay power and effect. And I’d be right: While DP slightly edges out FB up to level 31, it falls well behind after 32. Heck, it falls behind both Fire and Ice Blast at level 50. So those stats are worth a looksee too.

It’s a curiosity for us, of course, allowing us to peek into what the greater playerbase is rolling and interested in stylistically and power-wise, but for player devs, well, it’s a clear indicator for where development time ought to be spent.

Source: Homecoming. Thanks, Yrys!
In the spring of 2019, gamers uncovered a secret City of Heroes server running using the sunsetted game’s original code, which was ultimately turned over to the community. There are now multiple public and private servers for the beloved superhero MMORPG, with over 100,000 people on Homecoming alone. NCsoft has not commented publicly or taken legal action on them and is still in talks regarding the game’s future as of September 2019.
Advertisement

I believe the reason the HEAT and VEAT numbers are so low is that there are relatively few ways they can be rolled, since they don’t have multiple primary and secondary sets available to them. Then you look at Brutes and they have 22 different primary sets and 13 secondary sets. That would be 286 total combinations, however there are a few combinations that are incompatible such as Titan Weapons/Shield Defense.

/Back to the future!

@ silverlock – It’s a pretty sad commentary on the state of the MMO industry in 2019, isn’t it?

Um I might have a few um many, lots and lot of characters. I am not sure what I have the most of to be honest but I know I am still having fun with them so its all good.

With my Emps, I usually add Dark Blast as my secondary and have a blast. Dropping heals and, while they’re recharging, causing DoT, is fun. Plus, if you got a Kinetics MM, then the team is usually set with both offensive and defensive buffs. I don’t think I’ll ever roll any of the epic ones though. I can’t figure out how to play PB/WS, and there’s not enough people red side to roll a Widow or Spider. But I’m seriously lacking in the number of alts I feel I should have.

I made both a widow and a crab and switched to the blue side at level 1. Don’t let the red stop ya!

Thank you for his! Forgot that I can roll them blue side. Think I got the perfect story for them also.

A shame people are rolling empathy three times more than other sets. The other sets are actually easier to use or imo better for most teams later in the game. Empathy requires very high global recharge to come close to a good number of sets imo. This from a defender and corruptor player.

Not to mention the sheer fun to be had in the other sets you dont get with empathy.

SR for Tankers is something that I never saw before and its heavy reliance on Defense over resistance would drive most healers nuts. I’m not shocked at all that super strength is so popular for Tankers, it’s one of the most iconic super powers ever. I wonder how well Invulnerability does overall?

I have 14 characters right now, but haven’t been hitting it a lot although I did play my undead cheerleader EM/WP Brute last night (EM for the pom-poms). But, Battle for Neighborville is now available for those who get a Founder’s pack so I’ll be hitting that one heavily when I grab it, I haven’t looked forward to a game this much since I was like 12!

And none of them are what folks are playing.

Only have two 50’s though:
Nixie is a water storm defender who rocks in groups.
Nova Gold is a energy energy sentinel

My closest to 50 is a stalker with dual blades and I gotta say, there is something wrong with the to hit chance for stalkers. I miss way too much on non-aggro assassin’s strike. and that with 95% chance to hit.

Don’t feel bad. I made #43 today. And if Homecoming ever gets around to releasing Wind Control, I’ll probably make another!

It’s kind of a shame more people aren’t playing Stalkers but I think a lot of people don’t know how radically they’ve changed from their launch. The cornerstone of that are the 2 special enhancements in the archetype set. These are level scaling enhancements that are minimum level 10; sadly I was telling someone about them and they immediately dismissed them as “end game gear, nothing to worry about.” Like, NO, level 10 and up, just a couple hundred merits. Anyway the first one gives the power it’s placed into a chance to kick you back into Hide. And if a stalker is in Hide, they automatically crit with single target attacks and have a high chance with AoE powers. The second one, once slotted into any attack power makes ALL your attack powers have a chance of resetting your build-up power. Combined this means that about every 20 seconds Stalkers can go back into hide autocrit or can chain use build up to keep in a highly boosted (not perma but FREQUENT) build up state. In fact, I put a Gaussian’s proc which has a chance of a bonus build up in my actual build up power and then proceeded to have the base power reset so quickly that I stacked build up FOUR TIMES for a couple seconds. Basically, stalkers are the new scrappers, just with lower hit points but free stealth. They can even be a broadsword/shield stalker and from all I’ve read it’s the sickest thing possible because of the nearly crit-on-demand playstyle coupled with powerful attacks.

It’s a lot of fun to play stalker.

but it is tough to solo those elite bosses that you sometimes get in mishes.

Actually I was soloing those guys so easily I thought it was broken and that was before I got the AT enhancements. Like that mission in Night Ward that ends with multiple EBs? My Psi-Melee/Willpower Stalker just GANKED them both so hard. I think the Honoree was the only one I really had a problem with, we both did and resisted psi damage and his hit points let him hold out better (plus Fusionette started the fight prematurely…)

So Fusionette did what she is supposed to?

I’ve tried but it’s just not my playstyle. Even in pen & paper games, I don’t like the stealth classes.

Palia gives you an aural taste of its ‘peaceful’ soundtrack