A new City of Heroes rogue server has joined the chat: Specifically, it’s the Reddit-backed server, and it’s called Pleiades. It went live at midnight last night running the beta build of the Ouroboros i24 code.

“We’re live,” the team posted early this morning. “Using Cream Soda or Tequila please add this manifest. You’ll need to go to Options > Manifests > put the manifest link in, click add, click ok. Then you’ll see Pleiades, Rebirth, and Ouro Dev.Join Pleiades and we’ll see you on Maia. If you have had account login problems, please make sure your passwords are no more than 15 characters long. The client itself also seems to have issues with passwords 16 characters long or longer. So, keep them to 15 or less please.”

According to the team, the server will be running double experience through Sunday night, that it’s partnered with Rebirth (specifics coming later), it’s not taking donations, and it’s funded at its current budget and anticipated size for the next four years. Part of the goal of this team is to pre-purchase hardware and provide help for other servers, too. As the lead on the project explained it to me, the goal is to provide these servers “free of charge to the rest of the community,” thereby “offering them up to other smaller groups who have funding shortages or scares.”

Reddit Discord admin RayneCloud has been compiling a list of community servers; she kindly shared it with us and we’ve added to it, and with our powers combined, we’ve made this the most complete list of public CoH rogue servers that we know of right now. If you know of one we missed, drop us a tip!

Do try not to overload the smaller shards – not all of them are intended to be huge!

Over on the Homecoming servers, the developers are promising fun stuff this weekend for the Memorial Day holiday, including a multi-shard costume contest in one of the new zones (Kallisti Wharf), huge raids (partly for testing), and a duel showdown between devs.

Homecoming’s also updated its multibox policies again-again, restricting players to multiboxing with only three characters and only when under 1500 players are online on that server. “We advise players that wish to multibox to stay away from Torchbearer and Everlasting, as they frequently go above 1500 players every evening,” the team says. Offenders will receive temporary bans; repeat offenders will receive permanent bans. Ouch. Note that you can monitor server pops on the game’s website. The devs do note that they’re not talking about families playing from the same household; we specifically asked them about that – apparently a lot of people are wondering about it too. While the devs don’t want to reveal how they’re telling the difference between your kids playing alongside you and bots, they assure me they’re not banning anyone without warning and that issues will be resolved as they crop up. “So far none of the multibox incidents we’ve tackled have been false positives,” a rep told me.

Did you create a ton of characters on the Homecoming shards to hold names just in case the servers got all merged back together? Or was it just me? Regardless, the time for name-hoarding is coming to an end, as the team says that in two weeks (or more), it’ll begin releasing character names of unused toons back into the wild. So you can delete your hoard now, or you can log in a few hundred characters once a month just to hang onto them all. Ain’t nobody got time for that.

Finally, the /coxg/ server announced this morning that it will be reverting to i24 this afternoon. 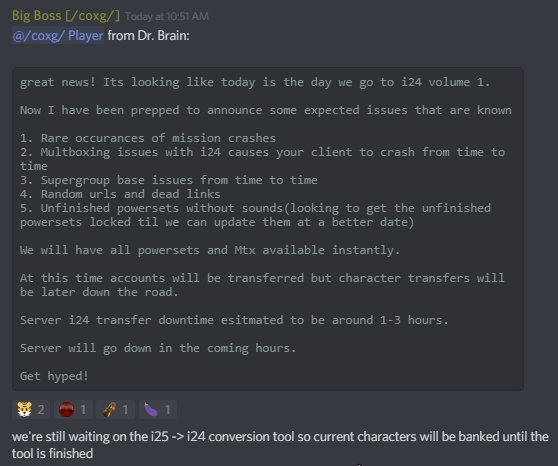 The Reddit-backed Pleiades server also got a bit of an update yesterday: 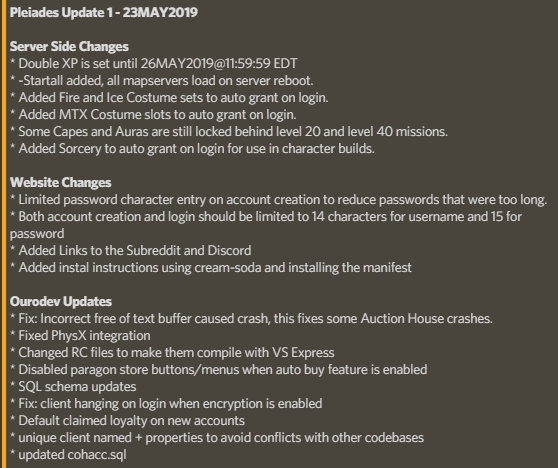 Got City of Heroes community news you think we should cover? Drop us a note!
Confused about the City of Heroes rogue servers? Our extensive coverage can be found right here. The short version is that this spring a leaker exposed a secret City of Heroes server running for the last six years using the sunsetted game’s original code, which was ultimately turned over to the community. There are now multiple player teams working on multiple public and private servers for the beloved superhero MMORPG, with over 70000 people on Homecoming alone. So far, NCsoft has not commented publicly or taken legal action on any of them, and the company is in talks with players regarding the game’s future.
Advertisement