[This story has been heavily updated throughout with more at the end.] It appears that the City of Heroes rogue server that was up in testing all weekend has already run into trouble with what the community was initially assuming was NCsoft, though it’s since been made clear NCsoft had nothing to do with it.

Consequently, the test server has been wiped by one of its developers, and the Discord is an inferno of rage right about now. Here’s part of the original official statement from one of the Discord mods, Voodoo Girl, plainly made under the initial belief that the server was under legal threat.

“This server, as of right now, has to be shut down indefinitely. We are on a direct course for legal action. As such, steps must be taken in order to protect the people involved in this project, their families, and their futures. As with all of you, we are heartbroken. We wanted to see our City return, but to do so at the destruction of the lives of those involved is too great a risk to take. However, this project is not finished. We will continue to work towards the revival of City of Heroes with all efforts that we can make. We cannot give you all a time frame at this time. We are in discussions to do what we can to revive some form of the server, however we do not wish to commit to a point in the future that we may not be able to reach. You have trusted us to this point. We ask you to extend that trust, and we will in turn do everything within our power to prove to you that we are deserving of it.”

The Discord owner had harsher words, saying the programmers were “heading into legal fuckery.”

“As it stands, we are heading into legal fuckery. My hands are shaking as I type this up, so please bear with me. The entire project is in jeopardy, but the only feasible solution we have is for me to set up an LLC and fight what is happening at this time. I am risking everything for a community I love.
I am doing everything I can to defend those who were involved in this situation. I am going to get fucked sideways over the next few months to years, and things are going to put me into some major legal turmoil. I will have lawyers out the ass, and I will be put into personal jeopardy. This is a project I am going to sink with, and I WILL do everything in my power to get done. I am praying for mercy right now. I am extremely emotional right now and I feel the ten years I once decidated to this game is being ripped out from under me again. I appreciate the support I’ve had from the community. I have to break the one promise I wanted with every fiber of my bewing to uphold, since I’m just a fucking semi truck driver. A fucking. Truck driver. I am going down on this ship. This is my hill to fdie on. I will fight tootyh and nail to get EVERYTHING we fought for back. I know its tough asking anonymous for support, but I’m in for a rough fucking right. I have no way to make a closing statement, so I may as well go as fucking cheesy as I can.”

Worth pointing out here is that it’s seriously not OK to go running around threatening NCsoft right now; this is not really an unexpected potential outcome, and it’s not been confirmed by any public entity on the record either. It’s also worth noting that this particular private server was being run independently – we don’t even know who’s in charge of it [now]. It’s probably not a good use of time and effort to panic and rage right now given how much we don’t know about what’s still going on behind the scenes. We’ll update when we know more. 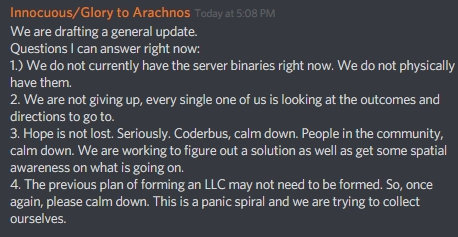 “As of now, we are running on the assumption that there is no DMCA. We have a drive that we are currently verifying on if it’s the server binaries. As it stands, it has everything. There has been some fuckups that lead to mass server panic, and an emergency administration and codemod meeting has been called. We may very well be able to salvage this situation before the next sunset. No promises. Do not hold this against me. We have a gameplan. It depends on verifying this code right now. Once it is achieved, we are pushing to get a server back up immediately. The original goal of the server has been to get a stable i24 for distribution and by the Well of the Furies we will get it. This chaos was unprofessional on my part (partly from my inexperience), and triggers were being pulled before we even had the horses at the races. We will also be futureproofing future development to make sure this kind of clusterfuck will never happen again. Also, allow me to be blunt and address this once and for all. FOR FUCKS SAKE, STOP HOPPING LEANDRO’S **** THE MOMENT ANYTHING HAPPENS. MYSELF INCLUDED.”

The current Reddit rumor maintains that a lead engineer on the test server was spooked by some sort of potential threat and pulled down the server. Regardless, it looks as if a new dump of base code has been posted publicly, and multiple versions of servers and codebases are being worked on. Just a reminder: Nothing on MassivelyOP constitutes legal advice. We do not advocate testing the law here. Have some chill.

However, Yuvi admits that NCsoft didn’t actually take any kind of legal action against the team, and there was no direct evidence that there was a threat mounting at all, just the claim from a third party. “I just really want to clear NCsoft’s name,” he told us. “They are to me a good company.”

Seriously, stop trolling NCsoft people. You’re not helping anybody here. The prevailing message is that folks are back to work on a new server, so no panic is necessary.