What should have been a fun Memorial Day weekend in Paragon City turned into nightmares for some members of the City of Heroes rogue server community. The Reddit-backed Reborn/Pleiades server posted a rather disturbing update suggesting that some of its staff is being harassed, including an alleged swatting incident and an unsuccessful hack attempt.

Developers have since told MOP that they’ve moved away from cloud hosting onto a new server in response and that the hack was indeed reported to police. We haven’t been able to independently verify the SWAT attempt, but we’ll update when we have done so. Update here: We’ve now been in contact with the alleged swatting victim, who says he wasn’t swatted; this appears to have been a misunderstanding over an incident unrelated to City of Heroes, so we’re amending our title accordingly.

The Discord-based Rebirth server suffered some extended downtime this weekend, also apparently due to an attempted breach and harassment incident.

“On further investigation, our sysadmin discovered that one of our routers was breached recently while he was spending time with his family. There is NO indication the breach went deeper than this router – the actual game server was not breached – but the router’s connection information was tampered with so that after the server was restarted for maintenance, connections to the server failed. The admin has identified the vulnerability exploited to cause the breach and is taking steps to correct it. The desktop image of the router was also replaced with a picture of our sysadmin’s front door, taken from Google street view. There is no further evidence of a threat to his personal safety, so he is working to get the server back online ASAP. He has made a copy of the router data in the state he found it in and will be investigating what legal action can be taken. We sincerely apologize for the extended downtime. Our sysadmin is working as hard as possible to get you all back to patrolling and/or terrorizing the streets of Paragon City!”

We asked the Homecoming team whether there have been any recent attacks on their servers; a representative told us, “Our security setup is very robust. As with any publicly accessible service it is, of course, being hammered from many sources, but as of yet nobody has had any success getting through. As for harassment: There’s a reason most of the Homecoming Team is anonymous.”

The sad reality is these kinds of threats and harassment efforts have gone on in waves since the beginning of this rogue server effort; our first knowledge of threats – against SCORE/Homecoming’s Leandro Pardini – came as long ago as April 16th, 2019, along with multiple doxxing incidents in the subsequent weeks. Suffice it to say, there’s still a very dark layer to this community.

Here’s what else is going on around the CoH rogue server world:

The Homecoming team posted a statement this weekend addressing the claim that the team has been unwilling to aid other teams in setting up their own servers.” Homecoming says it has in fact provided advice and support to likeminded groups, but it is very specifically not sharing “any code that’s based off of the original City of Heroes source code.” And it believes it has a good reason:

“The reason for that is pretty simple: The only legal action NCSoft has taken in relation to City of Heroes’ return is a DMCA claim against the original upload of the i25 binaries (which, for the record, did not come from us). They haven’t touched any of the servers. The conclusion we’ve drawn from this is that at least for the moment, NCSoft do not mind the servers being up, but they do mind code (and other files) being shared. And if we now refer back to our prime directive: Sharing code could have put us, and the Homecoming servers, in the (legal) firing line. Obviously, we did not want this to happen, and so we opted to not directly share any code based off the original source, and instead just provide advice.”

The Homecoming team has also outlined the ways that its servers’ players – it has 91,000 now, peaking at nearly 10,000 concurrent over the holiday – can help apart from donations, which will indeed be opened again. The team recommends that would-be GMs and mods strut their stuff in Discord first and that web admins, artists, and programmers post in the appropriate threads. The group says it “firmly believe[s] that i25 (and by extension, i26) is the future of the game” and debunks the rumor that i25 is a “dead end” or “more unstable than i24,” pointing out that since the code is based on SCORE, it’s already had years of tweaks and content – for example, improvements to the Imperious task force and new Market Crash trial. The developers are also working on numeric cooldowns for hotbars (YAY!), coming in the next patch.

The Reddit server has announced that it’ll be celebrating Pride Month through June. “We’ll have details posted at the end of week, but we are planning events Friday, Saturday, and Sunday, every week during our Pride Month Celebration,” the Reborn/Pleiades team writes.

Redditor The_Halcyon_Kid posted up a nifty analysis of Google trends on NCsoft’s key western MMORPGs, finding that Google searches on City of Heroes have surged in the US in particular since April when news of the sercret server first broke. Guild Wars 2 is still beating it – as we’d hope, given how much money and manpower is behind GW2, right? – but it’s trouncing search interest in Aion, Blade & Soul, and Lineage 2. The whole thread is worth a peek since The_Halcyon_Kid also breaks it down for other countries, where CoH isn’t much of a blip. 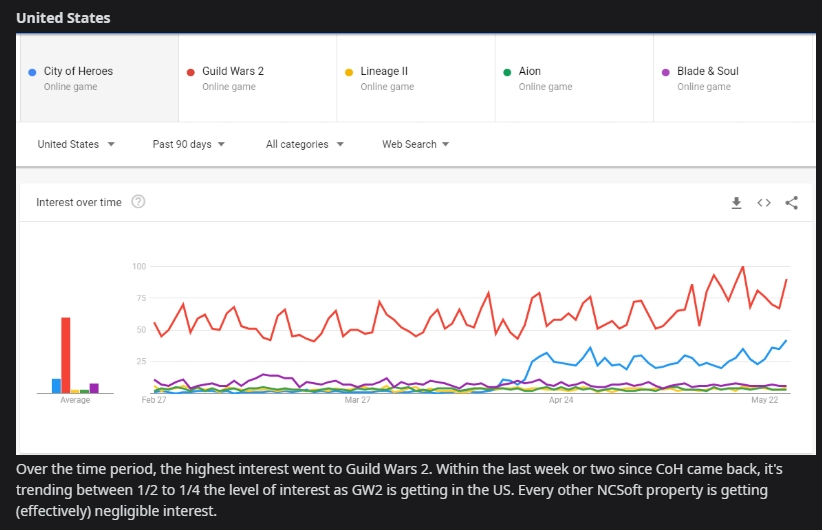 The 4chan-backed /coxg/ server pushed out a patch this weekend with some inventory quality-of-life additions:

Got City of Heroes community news you think we should cover? Drop us a note!
Confused about the City of Heroes rogue servers? Our extensive coverage can be found right here, and we’ve posted a list of all the servers we know about too. The short version is that this spring a leaker exposed a secret City of Heroes server running for the last six years using the sunsetted game’s original code, which was ultimately turned over to the community. There are now multiple player teams working on multiple public and private servers for the beloved superhero MMORPG, with over 91000 people on Homecoming alone. So far, NCsoft has not commented publicly or taken legal action on any of them, and the company is in talks with players regarding the game’s future.
Advertisement