This past Friday we reported on some issues with RuneScape’s login servers, which were so bad that the devs had to roll back the servers to a few hours and were forced to postpone this week’s update. As of right now, it doesn’t look like things have gotten any better as problems persist through the past weekend.

The last major published update was this past Saturday, when an update on the website reaffirmed Jagex’s efforts to correct the problem as well as an ask that those who are affected submit only one ticket so as to not extend customer service wait times. Furthermore, the post assured players that no accounts have been lost or will be “permanently stuck” as a result of the issues. “The coffee is flowing, and our teams are working throughout the weekend working on solutions, so please hang tight. We truly appreciate your continued patience and understanding. We’ll keep you posted with any further news as we have it,” closes the post.

As of this writing, there has been no immediate new updates beyond a post on the game’s official Discord, which repeats some of the touch points that were already mentioned, promises some more news soon, and also promises that due compensation will be considered after the issues have been resolved. 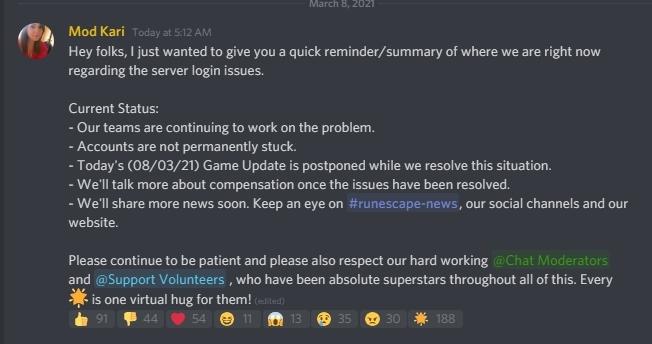