(We’re updating this post with the latest news on the delay and the launch as it happens. The original article follows!)

Yesterday, we noted that Lost Ark was unintentionally spewing founder packs repeatedly to players, resulting in multiple stacks of currency and salable cosmetics going out to some gamers. That’s fixed now, and Amazon is working on removing those ill-gotten gains from players, who will not be penalized.

But that’s not the only thing happening as Lost Ark prepares for its noon official free-to-play launch today. For starters, players had noted they were willing to switch servers to help with server overcrowding, but they couldn’t because that’d mean leaving their founder pack spoils behind. To solve this, Amazon and Smilegate are granting founder pack buyers one extra set of untradable exclusive items on their new home, though it’s not ready just yet.

Meanwhile, the devs have capped new-character-creation on servers with huge queues “for the foreseeable future,” meaning that if you’re on a big server now, it might be hard for friends to join you if they’ve waited until today to jump in.

On the other hand, these two bits of news together mean that you might consider jumping ship to one of the 15 brand-new servers opening up today in time for the launch – that appears to be in addition to the two servers added last night.

The servers are down right now for maintenance and a small patch ahead of launch.

The Lost Ark servers will be coming down on Friday, February 11th at 5 AM PT for a hotfix. Downtime is estimated to last up to 4 hours.

Read up on all the fixes below!https://t.co/ccMuryimpx

Unfortunately, due to deployment issues, launch is delayed. We hope to have this resolved in a matter of hours.

Your patience is appreciated and we’ll update you soon.

While working to resolve these issues, we will add 3 days of Crystalline Aura to all players who log in to the game between launch and 9 AM PT [5 PM UTC] on 2/13 as a small thank you.

We have received your reports that characters are missing, we are taking servers offline to get this resolved.

We apologize for the further delay, we’ll provide updates as soon as possible.

We have confirmed that no characters are missing. All characters created will be present upon logging in.

In the last few minutes, Lost Ark says it’s fixed missing characters; you’ll need to restart to update the client to make it work. A new server has been added, the Amazon is working on the auction house on the west coast too. 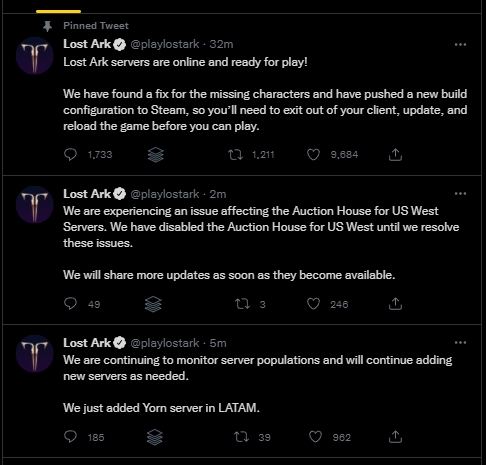