At the tail end of last week, Bethsoft teased Fallout 76’s next update, Invaders from Beyond, but as of today it’s revealing what it’s got in store not just for that update for for the rest of the year. Spring first, with the March 1st patch:

“Our next patch will be here soon with an all-new seasonal event, Invaders From Beyond. In this map-wide event, players encounter UFO appearances and aliens. Defeat the invaders and destroy their deployed Brainwave Siphons before they complete their ‘research’. This patch also brings improvements and changes to Fallout Worlds, including the ability to earn S.C.O.R.E. on daily and weekly challenges, new settings for C.A.M.P. buildings, PvP settings, disabling VATS, and Legendary Perks.”

Summer will see three public events, plus scoreboard improvements for subscribers. Fall launches The Pitt, which was first announced at E3 2021; it’ll send players outside Appalachia through a new hub in Whitespring with repeatable missions and the reintroduction of the Trogs. Finally, come winter, players can expect an update with a traveling roadshow in the Ash Heap region, with new public events and a new region boss event. 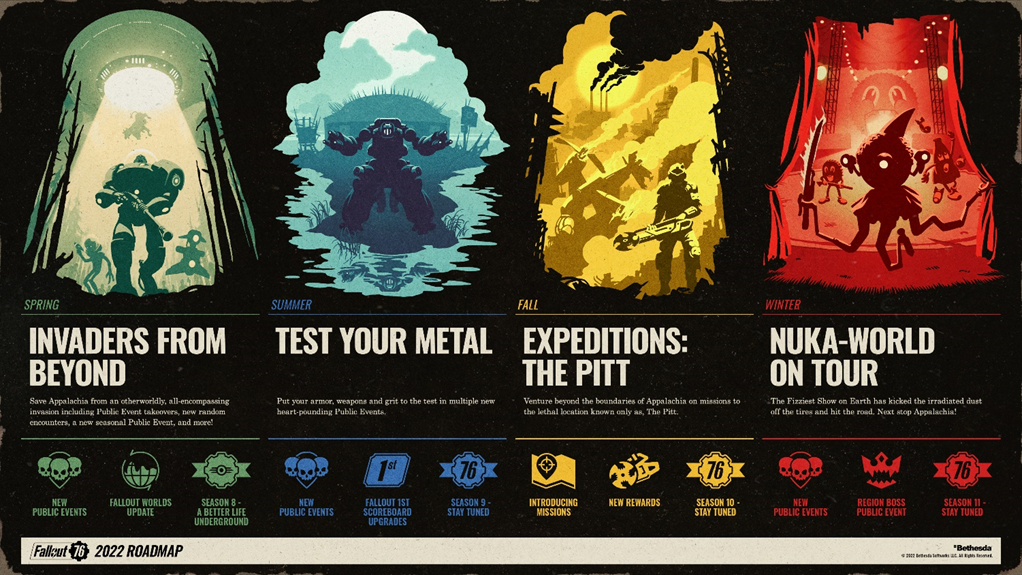