There’s often a moment I’ve experienced when playing survival sandboxes where I hit my stride. The mechanics make perfect sense, I have a plan for what I want and the things I need to get there, and progression kind of just hums along forward. That’s where I’m currently at in my run through V Rising, as this week saw me make some pretty good strides, as far as I’m concerned.

Before I got into the swing of things, I decided to take a moment to see just what decay looked like for my little ramshackle set of wooden walls, and sure enough I logged in to a place that saw the walls beginning to buckle under the weight of existing (mood, though). However, after a quick bit of harvesting from the vermin nest to squish some rats into blood essence, a simple injection of fresh blood immediately repaired all of the damage and I was back in business. I don’t know if that’s due to the settings of the server I’m on or if that’s just how V Rising does things, but it just took 10 essence to see my shack stand for another day.

Of course, 10 essence wasn’t enough, so it was time to go out on the hunt, and I elected to chase the chosen V Blood as per the polls, Keely the Frost Archer. This little excursion ended up being pretty lucrative in terms of resources, owing to the fact that my prey was a pretty far jaunt from my homestead, and the trip took me through a few human bandit camp settlements along the way. After what felt like far too long, I finally got to Keely and experienced some pretty strong annoyances. 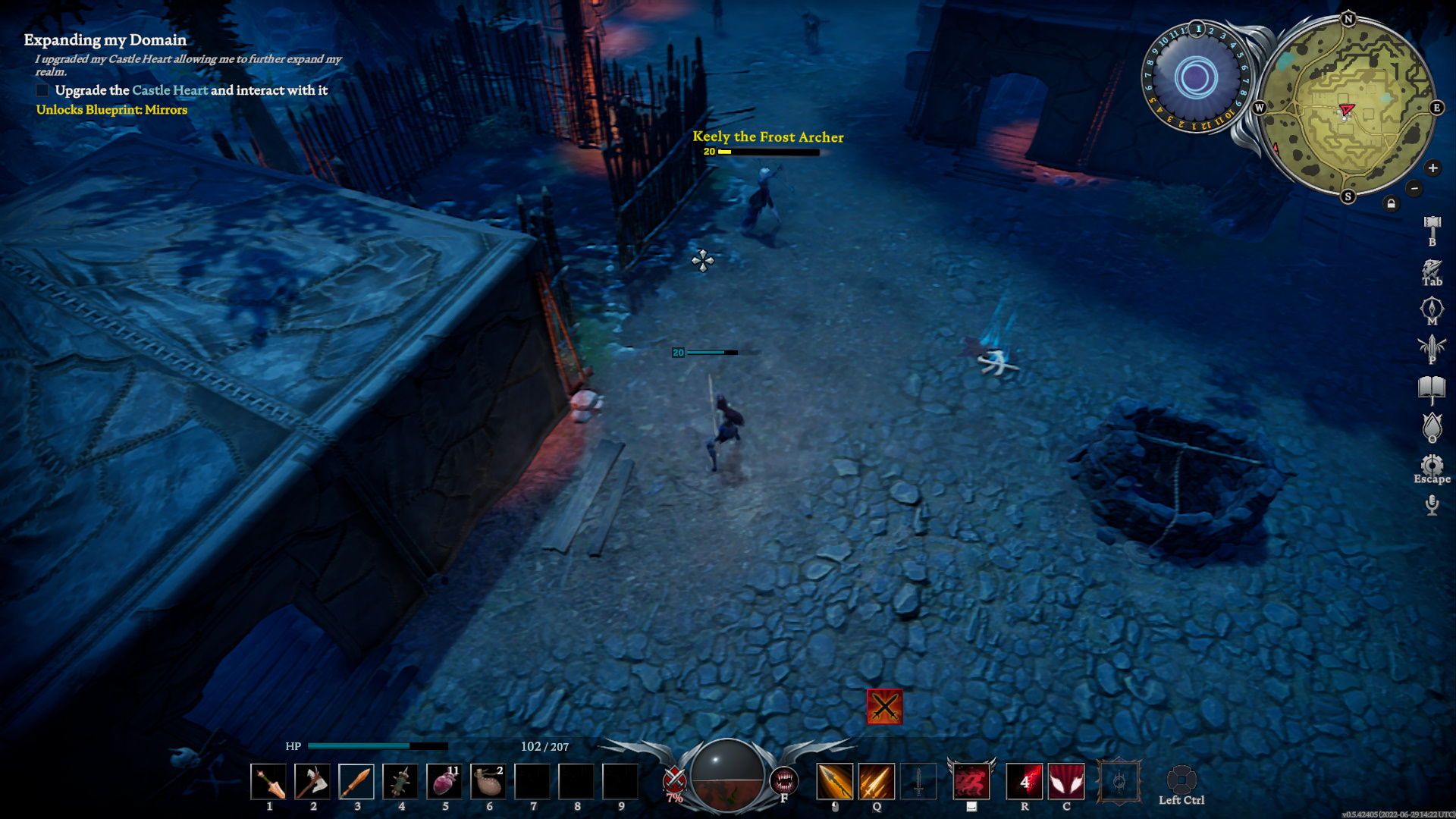 I mentioned before that the combat in V Rising is pretty responsive, and that’s still very much the case, but I also was having a lot of problems with Keely owing to her ranged focus and my reliance primarily on melee. On top of that, she kept on walking her way near small groups in the camp she was located in, adding an extra level of annoyance to an already annoying fight. These adds forced me to run away and heal up since there’s no on-demand healing skills to speak of – another annoying factor – and at one point I had to trade out the slightly stronger blood type to a weaker one because I was running out of juice to keep my one ranged attack working.

Through perseverance, a bit of luck, and some kiting shenanigans, however, I ended up victorious, landing the ability to craft stronger armor and a spell that let me fling frosty bats at foes. It almost all came crashing down when a vampire hunter with a red health bar and a skull next to said health bar happened to walk his way into where I was located, but I managed to turn tail and run before anything went bad.

I also unlocked the ability to craft mirrors, so that’s cool I guess? 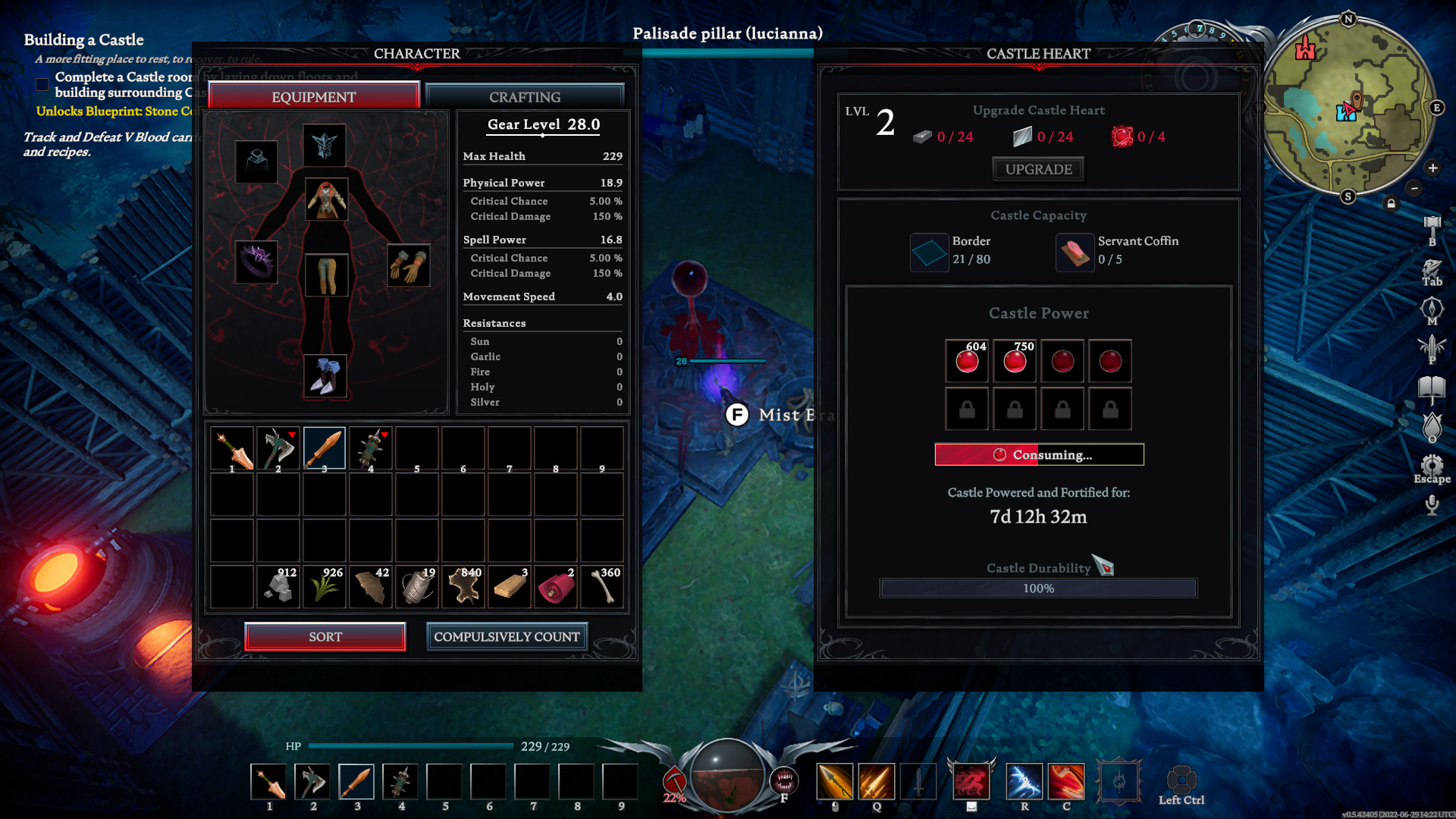 I managed to make it home safe, feeling a mixture of both relief and triumph. The fight was hard and I managed to push through, but it wasn’t what I’d call a fun challenge. The AI of ranged foes, as one would expect, means they want to keep at range, and when your character moves like they’ve got joints made out of lead, closing the distance ended up being a chase sequence out of an old Scooby Doo cartoon.It made an otherwise fun and reactive combat model feel clunky and annoying, and it never feels good to win because an AI enemy was too stupid to not deal with a well standing between it and myself.

Still, managing to take out Keely was the right call, since I put together some better armor. At long last, I ended up not looking quite so stupid, and I was also feeling confident enough to head out to take on the next target in my V Blood hit list, Rufus the Foreman. But more than that, I had enough blood essence to power my garbage house for a full week. So to that point, I’ll stick with what I’ve built so far; keeping my house topped up with blood wasn’t quite as obnoxious as I had first assumed.

The next V Blood target similarly turned into a bit of a goofy fight, but mostly because my stubborn and impatient self wouldn’t take “wait” for an answer. By the time I tracked Rufus down, it was well into the daylight hours, and instead of sitting around twiddling my thumbs, I elected to engage him during the day. Once again, it was a ranged enemy versus my melee sills, combined with the need to kite him and the extra foes he kept summoning forth through the areas of shadow that I could safely traverse. Against all odds and my own self-destructive stubbornness, I won the day, and earned what I hoped would be an awesome new weapon – a crossbow – but ended up just crafting a big disappointment; this thing is slow, ponderous, and keeps me rooted while attacking. The crossbow straight-up sucks. 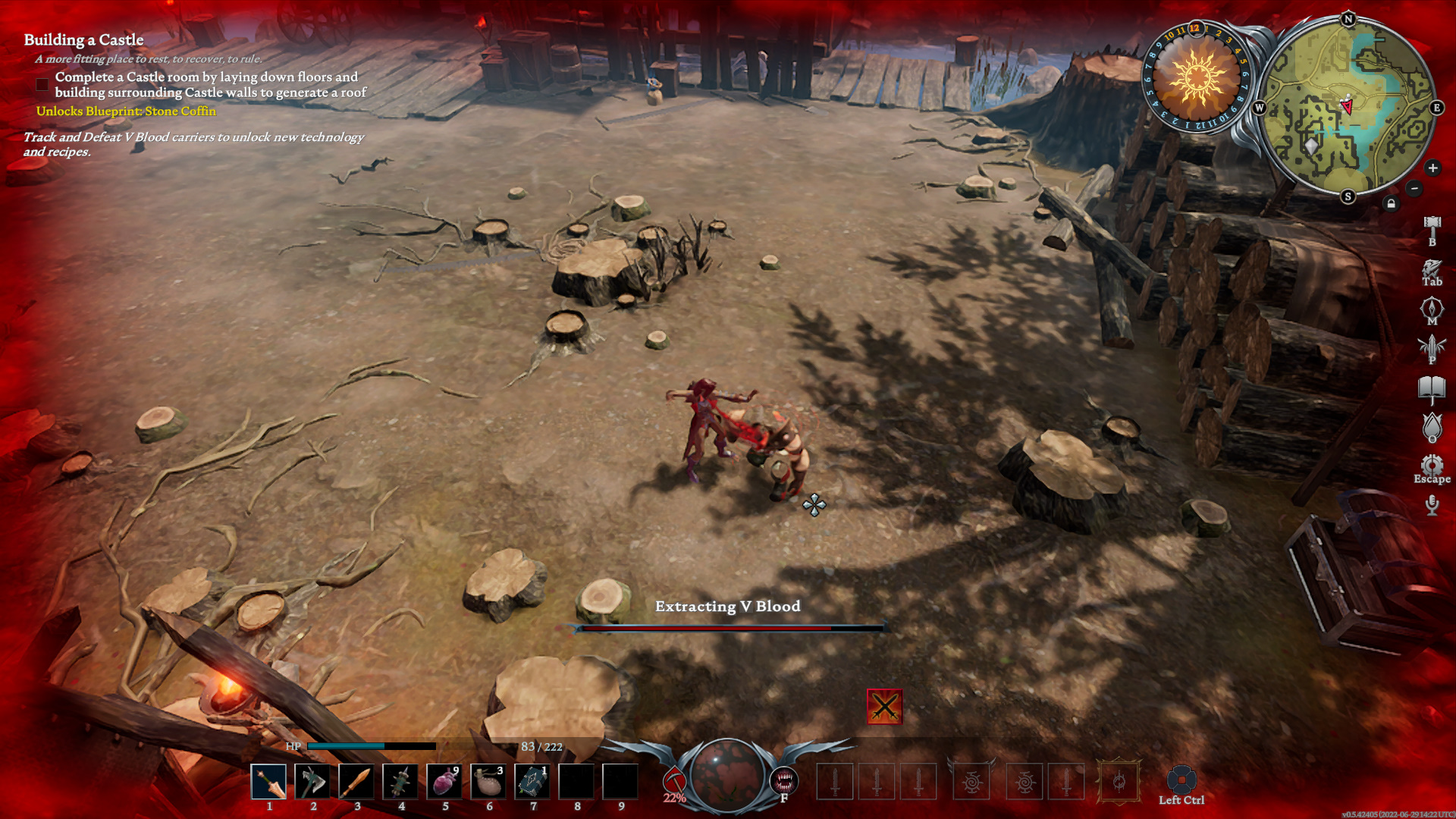 By this point, my primary goal was to start gathering stone and creating wood planks in order to put together some stone castle walls. The amount of materials needed for this is, frankly, absurd, but at the very least said materials are plentiful and easy to gather. It’s just tedious – the kind of padding nonsense that other survival sandboxes have done and called it gameplay. Still, it was nice to have a small production line humming along, and bit by bit I’m beginning to erect an honest-to-goodness castle.

The game wasn’t done showing me some insanity, however. During one of my nighttime excursions to find wood, stone, and blood, Lidia the Chaos Archer happened to cross my path. Being even level and feeling emboldened by my idiot’s gambit of fighting someone in the sunlight, I elected to engage yet another ranged character with mostly melee abilities.

This fight kept itself restricted to a copse of trees, where a random bear wandered in to join the fight. Then a couple of random wolves. And then the Alpha Wolf showed up as well. More cartoonish nonsense ensued as I aimed Lidia’s shots into the other enemies, which drew their aggro and helped me in the fight while also whittling them down enough to kill them. Through the madness of it all, I was successful, and got myself a sweet new spell to boot. 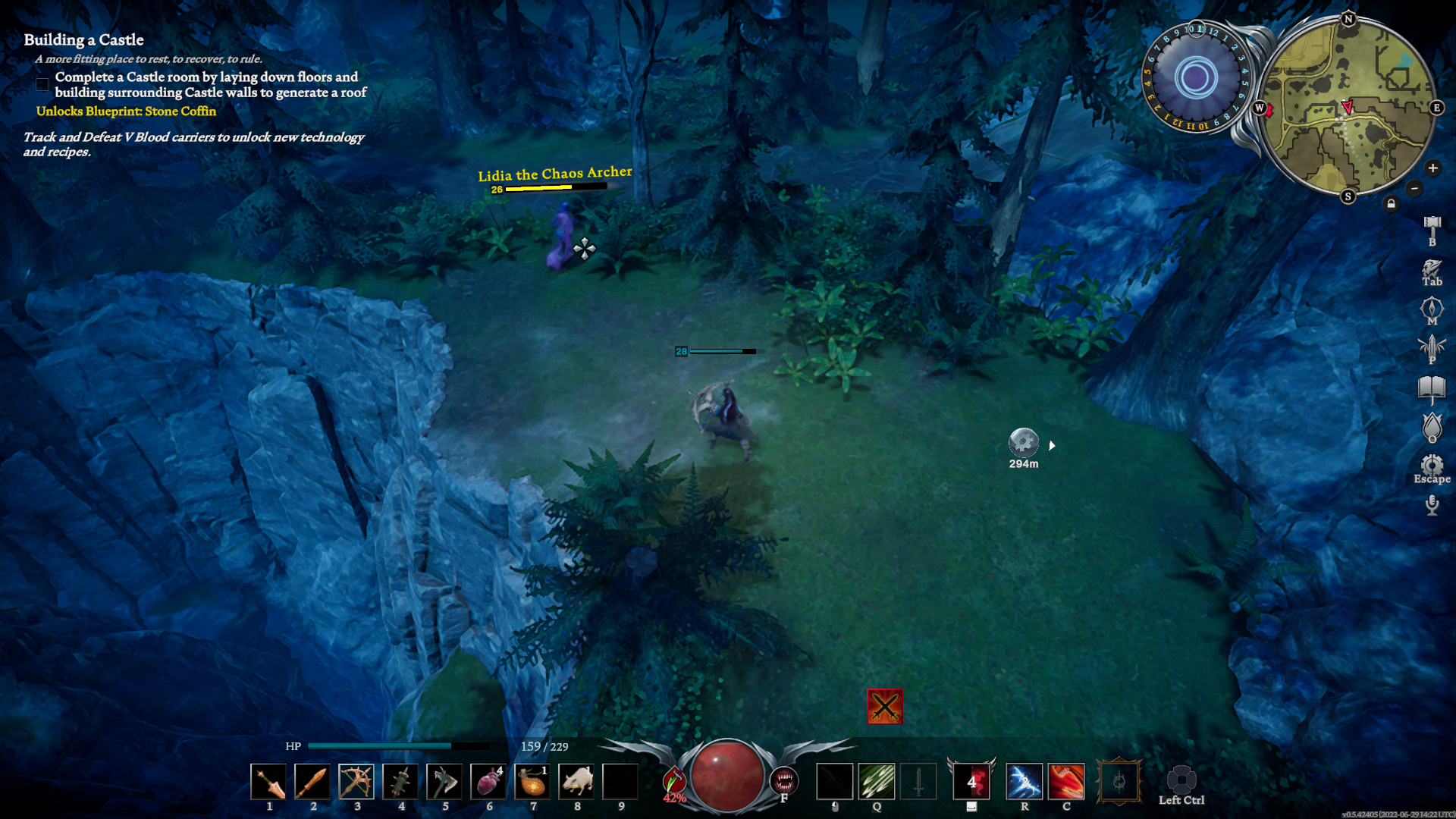 Now that I’m feeling confident in both my abilities and my equipment, the list of V Blood targets has grown a little more than I had expected. So that leads us to this week’s first poll question:

Who should be next on the V Blood hit list?

The next poll is kind of a random question mostly aimed at the regular players that might be reading this Now that I’ve experienced the sheer disappointment that is the crossbow, I’m not so sure that I should waste the few resources needed to also make a fishing pole. Basically, I need advice on whether this is worth it or not.

Should I craft the fishing pole? 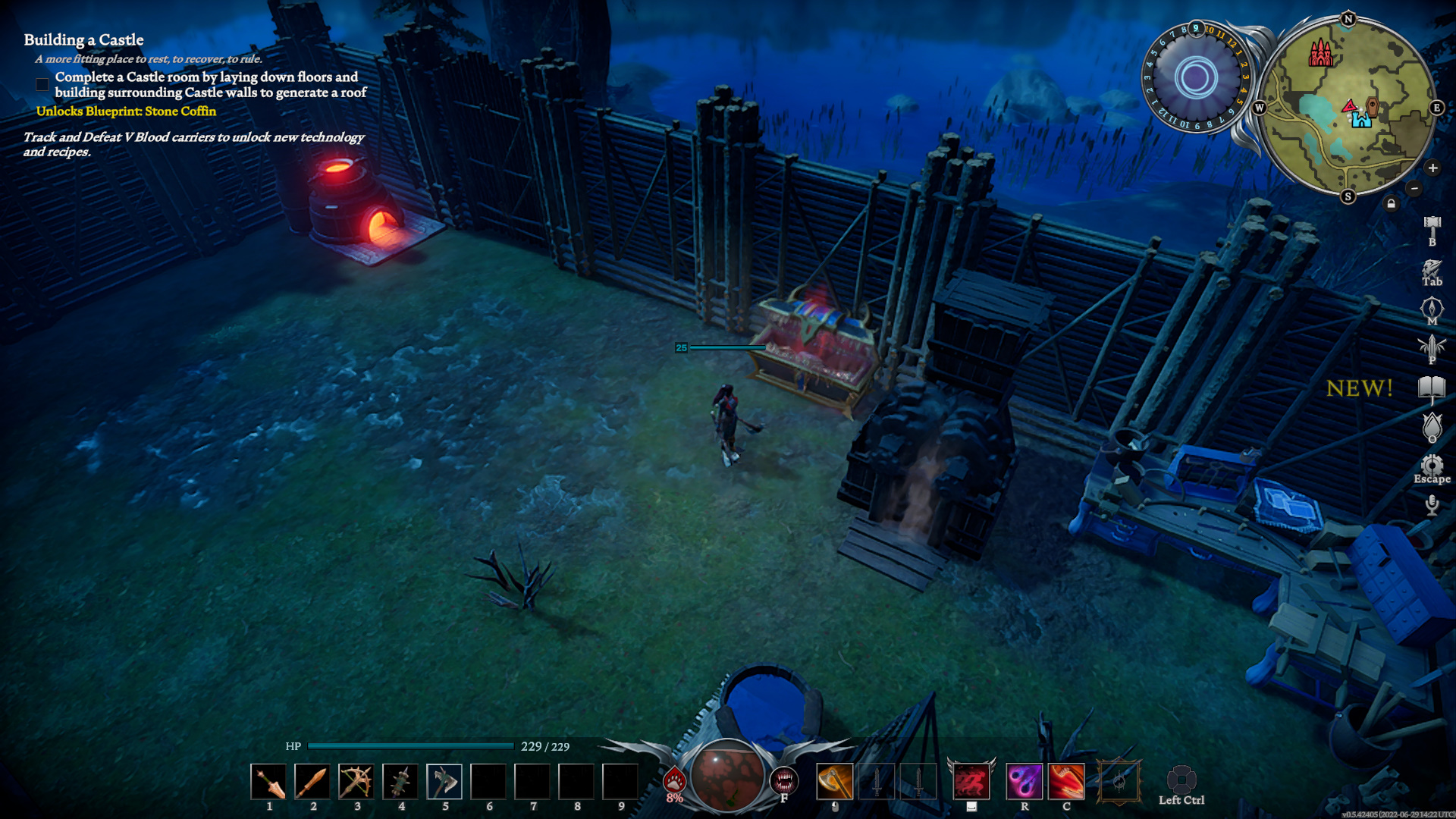 As usual, polling will wrap up at 1:00 p.m. EDT this coming Friday, July 8th. For the time being, I’m going to busy myself bonking all of the rocks and trees I can in order to finally put a roof over my poor vampire’s head.

MultiVersus kicks off Season 1, announces Black Adam and a Gremlin...