I’ll probably take some flak for saying so, but I’m still enjoying Star Wars: Battlefront. It’s not a broken game as much as it’s an incomplete game, though the cynical (i.e., realistic) part of my brain knows that this was by design. Electronic Arts is no stranger to cutting functionality only for it to show up later in DLC packs or paid expansions, and Battlefront said hello world last week with a $50 season pass for unannounced content displayed prominently on its launch day menu.

DICE has done an admirable job with the shooting controls and the Star Wars eyecandy, though, so in my opinion this a game worth saving. Or finishing, if you’d prefer!

Space combat is really a no-brainer — the IP is called Star Wars, after all — and I’m surprised that DICE forgot about that prior to launch. The game’s Fighter Squadron mode is fun, provided you use a controller, but for some reason the developers chose to set all of the skirmishes in atmosphere rather than the big black.

This seems like a cost-effective feature-add because how many devs and how much money does it really take to design a new map with a star field sky box and a pretty nebula or two? Gameplay wouldn’t need to change, so let’s get busy, ladies and gents! 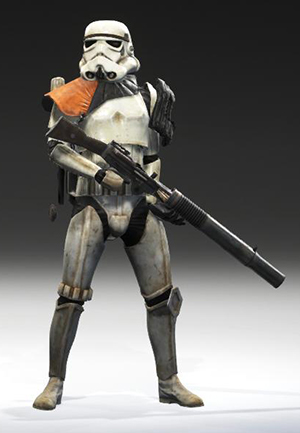 Assuming EA does want to spend a bit of money expanding the actual functionality instead of just reskinning maps, I’d love for DICE to take a page out of Pandemic’s book and bring back the ability for players to transition from space battles to infantry battles on board capital ships. You may remember that 2005’s Battlefront II allowed for ship sabotage in the form of both firing on specific external ship components or landing a craft in the hangar of an enemy vessel, disembarking, and continuing the sabotage objectives on foot.

This is probably the major bug-a-boo that needs a serious fixin’. As MOP commenter Rumm put it last week, “Gronk from The Goonies designed Battlefront’s respawn system.” I wish that was hyperbole, but unfortunately I’ve lost count of the number of times that I’ve died on Hoth and respawned underneath an AT-AT or died on Endor and respawned in the middle of a clearing looking like C-3P0 screaming “over heeeeeeerrrrre” from the opening reel of A New Hope.

Apparently none of DICE’s designers has ever played a shooter where you can actually choose your own spawn point from a handful of options. Seriously guys, this part is broken.

Battlefront’s single-player and co-operative missions are an unfortunate tease. They’re fun, don’t get me wrong, but every time I play one I just shake my head and think how much more staying power this game would have if there was some sort of campaign series instead of an uninspired survive-15-waves-of-stormtroopers afterthought. 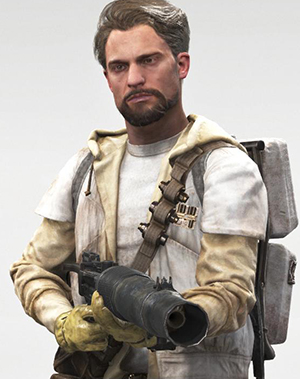 I don’t even need cutscenes or voice-acting, though it’s clear that DICE can do the former quite well since Battlefront is already packed full of slick little in-engine transitions between matches. I’d be happy with some narrative flavor text over the top of those vignettes and then a series of 15 to 20 missions set at some point either during or after the original trilogy time frame. Or full-blown cutscenes and voice-acting, whatever, but I’m just trying to be realistic with a game that’s already launched.

While it’s definitely fun to blast people and blast vehicles in the current version of Battlefront, I feel like I’ve been short-changed since I paid full price for a multiplayer lobby that didn’t even attempt a bit of single-player or co-op immersion in one of fiction’s grandest settings.

This, along with the respawn problem, is a what-were-they-thinking moment that defies understanding, at least from a player perspective. Every PC shooter worth playing, including DICE’s own Battlefield series, has allowed players fine control over maps and modes via a server browser, to say nothing of fostering communities based around particular gameplay facets. Hell, I still game with a couple of guys that I met because the original Battlefront series had a server browser.

DICE instead opted for a forced matchmaking system that theoretically provides for more of a jump-in-immediately experience, and from a dev perspective it also prevents players from congregating on the most popular maps and modes and instead spreads the user base across the full game. It’s not a deal-breaker for me since I’m still enjoying the title, but I’d enjoy it a lot more if I had more control over my experience and, more importantly, the players I share it with.

I know it runs counter to everything your average “games-as-a-service” developer is taught nowadays, but aside from the four tweaks I listed above, I’d like for DICE to leave Battlefront alone. I don’t want to see balance changes every few weeks, I don’t want to see weapon customization (i.e., grinding for more unlocks), and I don’t want to see the star card system revamped in favor of defined classes.

Battlefront’s core gameplay is solid and fun, and the quickest way to make me stop playing it and/or spending money on it is to start with the kind of godawful change-for-change’s sake crap that MMO developers do to keep people’s attention.

Class revamps and the endless nerf and buff cycle are obvious and tiresome ploys to keep players plugged in and chasing (cash shop) carrots, and I sure wouldn’t like to see it in a casual shooter that I’m having a fair bit of fun with out of the box. Battlefront’s gunplay can be frustrating when you run up against a pro gamer type, but in my experience — level 30 and nearly 30 hours of fragging as of this writing — most matches are fairly even.

Fighter Squadron could use a tiny bit of balancing because the Rebel A-Wing is an I-win button in the hands of a halfway competent player. Aside from that, though, DICE and EA should leave well enough alone and concentrate on adding features instead of changing existing ones.