Many people look at a game for its combat, however, there are many who also want a game with a variety of non-combat features. When it comes to a sandbox, non-combat features actually can — and should — be in the majority. And Shroud of the Avatar is definitely implementing a variety of features that may correlate and work with combat but are not directly related to it. While speaking with Richard Garriott at DragonCon 2016 about the game, I learned a more about these other aspects. Specifically, we delved into farming, cooking, and even dancing!

Old McMJ had a farm

We already know that when it comes to loot, SOTA will be depending on player-crafted items. But that’s not the only thing; food stuffs and buff items will also come from the players. And in order to cook many things, players will first need to grow it. Hence, farming.

Garriott told me that he wasn’t interested in making just a Farmville 2.0, but the skill will still be valuable and necessary. In order for cooks to make items, they need raw materials. For that, players will need land to crow crops and raise animals. Considering all the land rushes of other games, will it be possible for players to obtain parcels? Garriott said that while plots in the NPC cities are sure to fill up, there are significantly more options available in player-run cities. Additionally, you don’t have to purchase large backer packages just to get your own abode; the devs have held and will continue to hold lotteries giving away land plots. In fact, one is going on currently, and players just need to log in and claim their lottery ticket. And there is plenty of land: Garriott pointed out that everyone that entered the last lottery received a parcel. “We think property will be available for those who want it,” he says.

So what will farming entail? And how many crops and animals will be ultimately be possible to grow and raise? As to the first question, Garriott explained that farming is planting a seed, watering it, and getting a sprout. Then it becomes a waiting game until that plant matures and can be harvested. Some plants will bear fruit only in their appropriate season. At that point, growables like fruit trees should maintain their mature state and the waiting begins again to harvest, whereas things like vegetables would be harvested once then need to be replanted. As for irrigation, currently players will only be able to fill a bucket or rely on rain, but Garriott said the suggestion of being able to construct an irrigation system is a good one and may be something doable later on down the line. 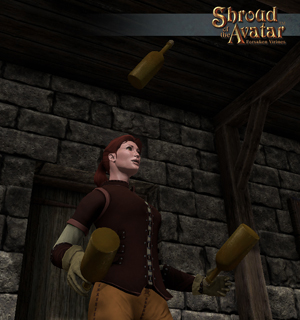 As for the second question about the total crop count, Garriott didn’t know offhand. “The farming and food spreadsheets are one of the few things in game that I actually personally designed myself. Literally every line on that spreadsheet came from me personally,” Garriott explained. “The reason I took that on personally is I realized how not only incredibly complicated it was, but I had a very specific idea as to why it needed to be structurally the way it was.” Garriott told me he’s more minimalist (look at attributes), and if there are going to be ingredients in game, they need to have various uses. “Referencing any one item multiple times gives it importance and value,” he said. He realized that having too many items would get unwieldy, such as that having individual recipes for each and every possible pie. So why not make a fruit pie recipe with a fruit variable? But wait, then how does that affect pecans and other nuts? Garriott took the problem on himself to avoid having way too many recipes in game, and/or way too many ingredients that have single uses in the game.

That said, once the system works, Garriott says doesn’t mind having tons of different kinds of food. But he doesn’t want to make a structure that wastes ingredients or requires added functionality just to work with the ingredient.

Cooking up some grub

Once you have all this food grown, you can prepare it into more elaborate foodstuffs. Garriott expounded on the food and cooking systems, which are other features I am quite interested in. (I can’t have a good tavern without good food!) And this system is pretty involved. He described how producing and preparing food needs to be more meaningful than just be a bit of added health. Different foods have different properties in real life, so why shouldn’t they in game? In Shroud of the Avatar, there are five food groups: protein, carbs, fats, water, and alcohol. All foodstuffs have at least one property, and they can be combined into dishes. These properties mimic what we’d know in life. Protein will help strength, carbs will give a quick rush and improve mental focus, and fats will offer sustained energy. As you’d expect, water will hydrate, and alcohol will intoxicate. As a fun note, Garriott explained how using alcohol as the solvent in most potions will naturally keep players from downing health and buff pots non-stop, since drinking too many will lead to blurry vision, staggering, and doubling over and puking.

Foodstuffs also have realistic expiration. Items will rot, with fresh items rotting quicker. Preparation not only combines food but increases shelf-life. Sure, folks can utilize the food raw to get some benefit, but eating prepared can do more and will last longer on the market and in customers’ bags. Additionally, since food can’t last forever, there is always a market for the commodity. As Garriott put it, “We have actually made cooking relevant.”

And what else you can do with your num nums once you have them besides buffs when adventuring? You can also sneak them up to your room in my inn (just please don’t leave too many crumbs around!), or you can sneak snacks into the theaters that are coming to SOTA. That’s right — the old sneaky snack routine. The theater is another incoming feature for the story-telling crowd. Garriott told me that the theater will be in-game soon, and players will be able to rent blocks of time in it in order to practice and put on actual performances. What types of performances are we talking about? That all depends on the creativity of players involved!

In fact, players are already putting on plays in SOTA. With the ABC music system that is already in-game, we can also host concerts. Now combine both of those with an ABC choreographed dance system and you can put on a full-fledged musical! Hello Dolly, and Bye Bye Birdie! Or maybe folks could do a Rockettes-like show. Garriott described to me how the team is working with the creator of the system to develop the same ability to synchronize music for not just dancing but both together. “We’re going to try and sync it up so that the dance moves and music all sync simultaneously,” he said. “The woman who developed the ABC system independently of any product that was pulled into Star Wars Galaxies also modified it specifically for us also.” Even beyond dancing, he then indicated that the sync feature would work for any emote really. 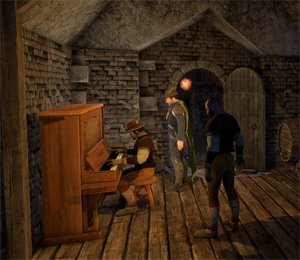 Speaking of SWG, will music dancing have any use in SOTA besides the entertainment value? Garriott said yes. For one, if people find the clues, they may discover that music will have a key presence in the story. He described a time in another game of his when playing a certain song on a harp would open a secret passageway.

He went on to discuss how the team is trying to make sure all of the skills have a set of interdependencies and the system encourages a level of specialization so that all skills will have value and a role. Every role then will have its rock-paper-scissors time when it’s the best thing to use in a situation – and the worst. That will include both music and dancing. However, he did emphasize that those rock-paper-scissor links are not yet created, much less implemented. But the long-term intention is for all these roleplay aspects to have value in-game.