Following the early access launch of Runewaker’s Guardians of Ember this week, Massively OP was made aware of player-floated allegation that the studio had misappropriated artwork for advertisements it’s running for the game.

The original artist is Joon Ahn, a former Disney and LucasArts artist who now works for Riot Games. Indeed, his original piece famously features Katarina from League of Legends. The insinuation from our tipster was that Runewaker had used Ahn’s image to create its own image for advertising GoE.

We reached out to Runewaker and InselGames PR for their side of the story and were told that it’s merely a coincidence as it’s a common pose.

“Our artwork is all drawn from scratch. Having similarities with other artworks are purely coincidence,” the studio says. “Besides, the character pose obviously appears in several scenes including Black Widow in Captain America.”

On the left is the Guardians of Ember advertisement; on the right, Ahn’s Katarina.

Here’s a look at the Black Widow poster, also quite similar: 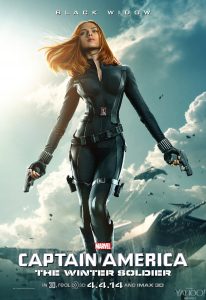 In other GoE news, Runewaker says that it has “updated [its] server structure and improved the overall performance significantly after facing some major issues” in the wake of the early access launch.

“Although we tried to be as much prepared as we possibly could be, the great interest in the title has taken us – and our servers – by surprise. If you joined the servers in the past 48 hours, you might have experienced our server difficulties live, ranging from a server down within the first hour of release and some lag spikes later on. We encountered a critical issue in our server network setup once reaching a high player number (and higher than in any test). In order to provide a continuous service and avoid a longer downtime we decided to temporarily move the game service to our test server setup based in Taiwan. As expected this meant much higher latency from client to server, but we could keep the servers online and let the players play the game. Nevertheless, this led to some critical comments circling around lag spikes and lower responsiveness in our Steam forums but also in several (video) reviews and Let’s Plays. With the new server structure in place, in fact we already moved the service back to our now enhanced live server setup in Europe, we are glad to invite you for another test round, to see for yourselves. We are further optimizing and evaluating a dedicated setup in North America as well.”

With thanks to Thurber.
Advertisement