The best kind of winter wonderland is an EverQuest II Frostfell Wonderland! Not only is the Frostfell Wonderland Village the home to the king of Norrath’s holiday festivals, it possibly ranks at the very top of all-time favorite zones in EQII. It’s full of the beauty of the season — with ice and snow to frolic in — without the worry of any actual cold or shoveling chores. And slipping on the ice here is an amusing antic you aim for as opposed to the painful accident you’d rather avoid in real life. Then there’s the music. Some tunes are so iconic that they transport players to memories within just a few notes, and the Frostfell theme is one of them. Just try to listen to it without having images of McScroogle and goblins in Santa hats dancing in your head.

Frostfell is definitely a draw for players; even those who have been gone for a short (or long) while return for this holiday celebration. After the slightly disappointing restrictions of last year, there might be some wariness mixed in the anticipation. But you needn’t fret; it’s actually better! Here’s a look at what you will find this Frostfell season, which runs until 10:00 a.m. EST on January 5th, 2017. And don’t forget to use our detailed guide from last year so you don’t miss out on any of these limited-time activities.

I mentioned disappointments last year, and a big one was the fact that there was no holiday love on the Time-Locked Expansion server. Yes, there was EverQuest II with no Frostfell! That actually was a tough pill to swallow, and the lack of holidays chased folks from those progression servers. It seriously doesn’t feel like EQII without Frostfell, and its absence was a big deal to players. Many went back to where the holidays were. Without holidays to participate in, I even stopped spending time on Stormhold.

Then along came 2016. When the Nights of the Dead holiday celebration appeared on Stormhold, the hope that Frostfell could actually become a reality this year was palpable. And it did! There was much rejoicing. The progression server doesn’t have the entirety of the festival, but it has most of it; only the quests tied to expansions that haven’t yet been implemented on the server are missing (Little Lost Goblin, Deepice Dreams, Special Delivery, O Frostfell Tree, Tis the Season, and Gift Giving). That leaves plenty more to do to hoard all those Frostfell goodies you have been missing. You can even get the free daily gifts from Santa Glug. 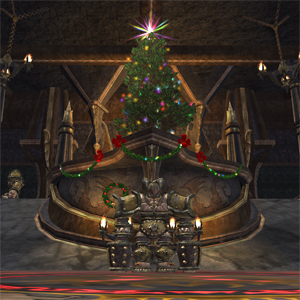 Merry questing to all!

One reason I love Frostfell is the fun and amusing takes on classic Christmas tales. I eagerly await what new stories will emerge each holiday. Honestly, I think players would riot if they didn’t get any new Frostfell quests. Yes, there are certainly a plethora of plenty of annually repeatable ones (which are totally worth doing for the cool rewards), but everyone wants to see something new as well to build on the holiday. That’s where Daybreak dropped the ball last year. Yes, it did add a new quest, but the studio tied it to owning the then-new Terrors of Thalumbra expansion. That meant plenty of players, including those who were drawn back specifically by the holiday, were left out in the fake cold. Many missed out. That’s not the message you want to send on a beloved holiday.

That was the second big disappointment. Understandably, I hoped that Daybreak learned from that fiasco and made 2016’s new content accessible to all players. So I held my breath and plunged in. All indications were that yes, all players could access the quest! The instance with the quest giver was open to everyone, and the mission itself was actually in another instance, meaning there was no need to travel to the expansion. Nothing anywhere indicated that you’d need Kunark Ascending. Unfortunately, I soon found out via my other accounts that you actually cannot talk to the quest giver, Meg Gingersnap, without having the expansion. I double checked on different accounts, even doing different quests to try and open it up.

Luckily, it turns out that this is not intended and is being worked on. Emily “Domino” Taylor said via Twitter, “Looks like it DOES require expansion but this wasn’t intended – will try to get that fixed! Nice find.” While that fix is going in, you can spend time checking off the other quests on all your alts using this handy tracker.

Looking for a Little Lost Goblin

So what is this quest about? If you don’t want to get any spoilers at all, please jump down to the next section about Glug’s gifts. That’s your warning. You can come read these impressions after you’ve run through Little Lost Goblin. Still here? OK then.

Very few places equate winter holidays with Goblins, but EQII sure does. And Goblins by their very nature are always into some kind of mischief, whether they are causing it by their actions or by being missing in action! In this case, it’s the latter. This year’s new holiday quest centers on looking for one of those little mischief makers. Taylor developed this quest, called Little Lost Goblin. If that title sounds vaguely familiar, it’s because it is; Taylor noted on Twitter that it’s a nod to one of her favorite authors, Isaac Asimov, and his “Little Lost Robot.”

Although it isn’t super long and involved, I really enjoyed the mission. I zoned into the instance and admired the environment. I noticed the holiday foods on the tables, the giant candy canes (mind you, I am on my teeny tiny Arasi) in the container by the wall, and I took a good amount of screenshots. Then I moved into the hallway to continue the search and BAM! Insta-death. I might have jumped in my seat and yelped. Then the helpful message “You may want to find a suitable weapon” came on my screen.  I’m guessing my death came a little sooner than expected, so when I rezzed I carefully crept over to see what actually happened to me and noticed that the statues were actually level 110 epic x4 raid mobs. Gulp. Maybe this would have been one of those times when having names turned on would have been a good thing. OK, then a weapon it is! I headed right for the most weapony-looking thing — the candy canes. As I approached, I noticed a small bucket of snowballs. Oh no they didn’t, I thought. Oh yes they did! The only way to dismantle these behemoths is by pelting them with a snowball.

So I ventured throughout the instance, flinging my frosty balls at everything that moved (and some things that didn’t) to accomplish my goal of finding lost Goblin. When I reached him, I noticed something familiar about him. It could have been the resemblance to the Green Goblin merged with Venom, or maybe the fact I’d worked with him before in 2015’s holiday mission. It was both.

As a funny aside, if you do this mission grouped, you will do everything solo, but you may jump into a groupmate’s Frostfell Workshop instance at the end without realizing it. I zoned in only to get the message “You will be kicked from this zone in 15 seconds.” What?! I desperately tried to turn it in fast, then saw my friend and we figured out what happened. For a moment I thought the game was taunting me, saying, “Oh sure you can turn this in for a reward.. PSYCH!” Luckily, turning around and entering my own instance worked just fine.

Glug’s gifts and other goodies

Like the other years, there are new recipes to buy for a few silver to craft up a bunch of new Frostfell-themed foods, items, and clothing. (We’re up to books IX for Frostfell Outfits You Can Make, Frostfell Feasts and Decorative Crafts, and Scholarly Pursuits for a Festive Frostfell.) There are also a host of new items to buy from the merchant for Ec’i tokens, including new mounts, tons of new armor, and many housing decorations. There’s even a cool knit cap! You can get a sneak peek of them on EQ2traders.com.

But that’s all stuff you have to pay for, as little as some of it might cost (except mounts — they are expensive!). What about free gifts? You are in luck, because Santa Glug is giving out free daily goodies to everyone again this year. Just log in and ask for a gift every 18 hours and you walk away with any one of the following:

I am aiming for a bunch of duck house pets so I can build a pond, but they seem to be hard for me to catch. With 31 alts to get gifts for every day, some are bound to show up, right? As it is, I have enough scarves to outfit an army. My duck luck was pretty abysmal, but I did finally get three ducks practically in a row! Thank goodness these gifts all can be traded, not just between alts but with anyone. If I can’t get enough before the end, perhaps a friend will spot me a duck or two. Now if you’ll excuse me, I must pay Santa Glug another visit!

City of Heroes Homecoming gets all Halloween happy

Dauntless releases the Bloodshot Shrowd and a new omnicell in latest...