Electronic Arts’ pre-E3 event, EA Play, this past weekend afforded us not only the chance to scope out the details of what’s new with Star Wars: Battlefront 2 but the opportunity to play a demo of it. No, it’s not an MMORPG; it’s decidedly a multiplayer shooter, and this sequel is looking promising in key ways.

We covered the original Star Wars: Battlefront, and I’ve played it before for gaming outlets, but I was one of the people who did so and then closed their wallets. Despite the fact that the game was fun, many saw it primarily as an incomplete, multiplayer game. I bought and greatly enjoyed Titanfall, a similar game that emphasized multiplayer action, but that at least had a bit of a narrative and some really unique game design features. It also didn’t charge essentially twice the price of a regular game for DLC maps that split the game’s community. SW:BF1 was pretty and had a little immersion going for it when it stuck to locations in the original trilogy, but it didn’t feel worth the price of a finished AAA game, let alone two. It was Battlefield developer DICE doing Star Wars multiplayer lite.

Perhaps with that in mind, EA spent part of its press conference addressing criticism of that game, with huge applause for those watching at home. More came from the addition of classes to the game, and yet more with the promise of space battles, a feature only available through DLC in the last game. Excitement bubbled over when free to play DLC was at last mentioned, ending the split playerbase issue.

At the actual event, however, you would have noticed that the applause and cheers were coming almost exclusively from the balcony seats and demo team compromised of streamers EA had brought in. Press holding back on enthusiasm is something that happens often with EA press conferences in general, but I can say that the original reveal for SW:BF1 had press going nuts. The reaction from the press in person this weekend was muted at best, and for good reason.

I noticed EA primarily addressing the campaign mode’s addition, avoiding any mention of April’s controversial public disagreement with DICE claiming the DLC would be free and EA refusing to promise that. This felt like a huge mistake, especially at a press event. That being said, the SW:BF2 reveal was the highlight of the conference despite a lack of cheers from the press. It was the only time I really noticed anyone else around me taking notes, beyond the Bioware Anthem reveal.

SW:BF2’s demo was also the only time people started to get out of their seats to look at what’s going around, and even a few people cheered, especially when the free DLC aspect was heard. The only issue was that EA didn’t publicly announce their additional monetization strategy: lockboxes. It was the reason a few press I chatted with after the event noted for holding back their applause: EA had been overly aggressive with monetizing the first game, and we all feared the worst, especially when it was revealed that Burn Cards, special abilities in the game, would be a premium incentive for buying content, as EA’s not a stranger to the pay-to-win scene.

The people behind the droids

While members of the press had their poker faces on during the conference, they certainly voted with their feet afterward: EA’s sports titles and Need for Speed demo stations were practically deserts, as press rushed to line up for hands-on time with SW:BF2. It was also the game fans lining up at the event kept mentioning.

While immersion was supposedly the selling point of the original, having Darth Maul, Boba Fett, Rey, and a young Han Solo all onscreen during my demo really broke that sense of Star Wars-ness. Maybe if the story mode is going to involve some kind of dimensional/time travel plot, I might be able to get into it. However, there are other things. Separatist droids are now one of the units players can control. In the first movie, the droids seem more sentient bowling pins, apt to stay together in formation until some bowling ball type occurance scatters them. In game, with real people behind them, the droids lose their droidness.

For all the talk of immersion, SW:BF2 seems to repeat the failure of SW:BF1 and then add some. Focusing the demo on the ground instead of space didn’t help. EA even avoided any mention of VR, though perhaps that term’s hype power has burned itself out. I wasn’t expecting the chance to be a moisture farmer, but hot off the heels of Rogue One, you’d expect a multiplayer game to focus on the broader universe. Boba Fett, for example, isn’t an Imperial but a bounty hunter. Han Solo may have ended up with the Rebellion, but the expanded universe had him as a former imperial turned smuggler. The ability to change sides, to be a war profiteer, to live rather than die in the universe, was missed, but this is also a sort of Battlefield spin-off, so we’ll let it slide and judge the game on its multiplayerness. 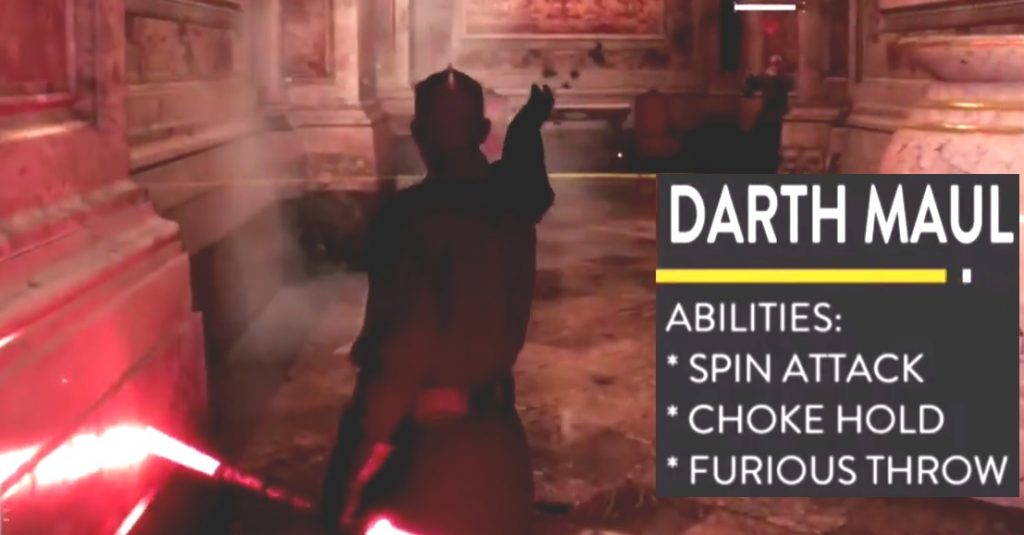 The light side of things

With immersion out of the picture and leaving MMO-ness aside, SW:BF2 felt good from the demo. How pay-to-win the game will be is something for launch reviewers to hopefully discover, but the core game was a well done, above average shooter. I mentioned non-combat mechanics previously because one of the new classes is the officer. While my immediate thought was, “Those guys Vader always chokes out?” the execution was pretty good. The droid officer I played not only could increase healing of those around him, but I also had a turret I could drop and a grenade launcher. I felt squishy, but when things were going bad, I noticed a decisive lack of communication among my fellow press, so I started calling out when I’d be spawning or following people (mostly the already visible hero classes like Darth Maul).

The droid officer I played not only could increase healing of those around him but had a turret I could drop and a grenade launcher. I felt squishy, but when things were going badly, I noticed a decisive lack of communication among my fellow press, so I started calling out when I’d be spawning or following people (mostly the already visible hero classes like Darth Maul). I normally prefer being able to build my own character, but as respawn is in waves (and seemed to spawn immediately once you had a full battalion of five) and class silhouetting seems important for identifying ally and enemy roles, I actually appreciated it. Besides, I still had the opportunity to fine tune some aspects of my loadout, so I didn’t completely lose my customization options. At least, facial customization wasn’t an option I saw, but between clone troopers and droids, I don’t think we’ll see the helmetless Stormtrooper issue reappear.

I’m not sure if every class gets this, but I noticed that being near other players awarded me a bonus, which encouraged not only grouping by proximity but correct gameplay for my class. Though we lost, mentioning my class seemed to help rally people, and I felt good watching my teammates die a little more slowly while I cowered behind them. As the demo used the PS4 and I’m a keyboard warrior, I was certainly underperforming in my ability to aim, but I ended up ranking around the middle at the end of the match, probably due to maining the officer to support my team.

That isn’t to say I didn’t try others. I got to be our literal tank, the one used to assault the city in Stage One. Like many lobby games, SW:BF2 utilizes several rounds. Stage One was getting our tank into the city, and we completed that mostly through standing on objectives scattered around the city. The tank I played had a huge blast radius that made up for my poor aim. The heavy units I played later had shields to protected me and the people behind me, though I missed most of my shots. The character I really wanted to try or fight against was Rey, as she supposedly mixes up players’ controls, a kind of CC I’m surprised I haven’t experienced in an MMO before but single player games have done since, well, forever.

Stage Two was disabling the security systems in a maze-like compound and “hacking” the system for a few moments without getting shot. As in most shooters, the UI updated us with our objectives, their locations, and which team was winning them over. I’m thinking this was a big reason our team was doing well: Stages one and two were objective based, not kill based.

Stage Three was where we fell apart, bottle-necked into a battle for Threed’s throneroom. This isn’t a best-two-out-of-three game. It’s a winner-take-all game. My brief moment as Darth Maul had me tearing through multiple players with multi-unit force chokes, which felt immensely satisfying, as did Maul’s taunts as my lightsaber ate through clone troopers until a sniper took me out, quite quickly, with a few well-placed shots.

The vehicles and heroes were fun enough in the last game, but whether it was my better performance or improved game mechanics, my experience this past weekend was more enjoyable than my SW:BF1 experience several years ago. I was still a terrible shot, but I felt significantly more useful in SW:BF2. I can appreciate multiple types of combat, but I prefer accessibility and indirect ways to contribute to a fight. MMOs may not always be accessible (endgame syndrome), but sandbox titles generally allow for crafters to contribute to the war economy. Star Wars: Battlefront 2 may not let you be Lando, but the new classes help, so you can at least be a respectable officer your superiors won’t choke out. My team did pretty well in the first two stages, but as the game gives each side a certain amount of team-wide deaths, it was possible for the other side to eventually win the day.