As I was writing our Lawful Neutral expose of Nerd Kingdom a few weeks ago, I was pretty bothered by the conduct of the company. For an MMO studio that had sold itself to crowdfunders as being different and not like those other companies, it ended up being significantly more shady than most of those other developers it was disparaging. And beyond platitudes about judging a book by its cover, the whole ordeal got me thinking about how gamers likewise often accuse developers of shady, nefarious, and even illegal activity.

Players love to fling accusations of false advertising, scam, vaporware, fraud, bribery, and pyramid schemery at games we feel haven’t lived up to their promises to us. But what do those things actually mean, and is the behavior we see from game developers actually illegal? In this week’s Lawful Neutral, we’ll take a look at one of the most common accusations lobbed against them: false advertising. 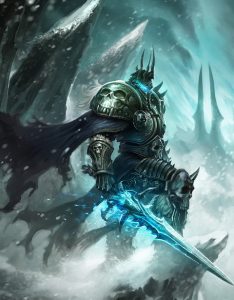 Let’s look at perhaps the most oft-cited example of false advertising: World of Warcraft‘s Dance Studio, which was advertised as part of the Wrath of the Lich King expansion. False advertising has a quality of intentionality to it, meaning that the company has to have to intended to falsify or mislead. In the case of the Dance Studio, Blizzard would have had to advertise the dance studio without any intent of ever delivering it. If pushed, Blizzard would likely be able to produce design documents, unreleased code, marketing materials that demonstrate it had the full intent of delivering the dance studio, which is why the standard doesn’t apply.

Often times what happens is that a developer announces a feature before it’s fully fleshed out to build hype for the game but can’t actually deliver the feature once it gets into the development. In most cases like this, the advertising fails the first criterion: It wasn’t intentionally false or misleading because the company had the intent at the time of the advertising to deliver the feature.

The second criterion is that the falsity has to be material, so it has to be important to a reasonable consumer. This gets a little fuzzy in our use case because its not clear whether Dance Studio was important to the community at large. Undoubtedly for some people, it was legitimately important, but do those people meet the “reasonable consumer standard” if they are in the minority? It’s not very clear, but my sense is that Dance Studio was seen as ancillary to the overall WoW experience. I think it would be very hard in this case to succeed in proving the falsity was material.

Where people often get tripped up here is the material requirement combined with the reasonable person standard. We assume that because it’s very important to us as a particular group that it’s material to everyone’s enjoyment of the game. We wax anecdotal to justify our points and assert the materiality, but the larger game community often doesn’t care to the same degree. In other cases, the feature could just be an extra and the developer could claim it was targeting a different audience in its advertising than the one that’s upset. In other words, it attempts to redefine the reasonable consumer to ensure that the feature couldn’t be considered material.

The third criterion is pretty easy to establish: Lots of people saw the advertisements, which is part of the reason that it’s still a bit of a sore subject so many years after the fact. People saw the Dance Studio advertised and were super excited about the feature! So we can say pretty easily we meet this criterion. It makes sense here — you can’t claim false advertising for advertising that you never saw.

The forth criterion is that the customer relied on the falsity to make the purchase. How many people only purchased Wrath of the Lich King because of the Dance studio? Not many. I’m sure there are a few people out there because MMOs appeal to all types, but it’s a minority who made a purchasing decision based on the Dance Studio. Not only that, the customer has to be able to prove they made a purchasing decision on the Dance Studio. That is going to be difficult to prove reliance in this setting for such a minor feature — since our “material” requirement is fuzzy. Also since its unlikely that we could prove that the Dance Studio was material to the game or to the community, we also therefore can’t make the assertion that a reasonable consumer relied on the falsity to make the purchase.

So in the case of the Dance Studio, I don’t think there’s a false advertising case. When gamers summon this example of “false advertising,” they’re merely being hyperbolic.

What about the canvas bag?

In the case with the canvas bags in Fallout 76 collector’s edition, the story is a little different. Let’s apply the same criteria to the canvas bag fiasco:

I think Bethesda agreed that it could potentially be in some hot water here, which is why it back-tracked relatively quickly and promised to make amends. While I can’t attribute any particular motivation to Bethesda here, I’m going to maintain that a potential class-action lawsuit over a canvas bag was at least on its mind, and thus the great global canvas shortage of 2018 was brought to an end.

So there we go. “False advertising” is far from an exact science – just look how hard it turned out to be to prove in No Man’s Sky’s case – but I think most of the time when gamers lob false advertising accusations at a developer, they fall more in line with the Blizzard example than the Bethesda example. It’s hard to prove under the best of circumstances, and the standards guiding false advertising are open to broad interpretation. But it’s a starting point — a list of criteria to start with if you think a developer might have tried to pull the wool over your eyes.