END_OF_DOCUMENT_TOKEN_TO_BE_REPLACED
Once I knew I’d be able to attend a SMITE panel and interview devs at DragonCon 2018, I knew the first question I would ask. It’s a big question on the minds of many: What is up with the big Hi-Rez split? Seriously, where did that come from, and what ramifications will fracturing all the games into separate sub studios have?

As I sat down with Daniel Fishman, design lead for SMITE’s adventures, I was able to get a dev’s-eye view of this change. Between that and the panel, I also learned a few other interesting tidbits about the MOBA.

True to my word, the first thing I asked Fishman was about the split (as did the players who attended the panel!). Fishman prefaced his answer by noting that another, less-publicized split in Hi-Rez actually preceded this one. He said that split happened when the shoutcasting and esports division broke off into their own entity. This move was successful, giving that division a separate identity and chance to work with studios while maintaining a close working relationship with Hi-Rez. And though they are in a separate building, Fishman said they are within walking distance.

What does that have to do with the big multi-studio split? Perhaps not much, but there was now precedent of a split working out. And while many of the facets aren’t the same, Fishman did say that it is about the games’ teams having distinct, separate identities. “Part of this decision,” he said, “is to really formalize the structures that were already there.” The split reinforces game identities and emphasizes pride in your work, he said; when you are on the SMITE team, you know you are on the SMITE team.

This led to my next question. In previous Hi-Rez interviews, it has been discussed how ideas, assets, and even devs have moved fairly fluidly between Hi-Rez projects. Will this split end such collaboration? Fishman said no, “We we still collaborate, and we still work together all the time.” He noted that all of the sub studios are still in the same building, and they all have access to the resources of the Hi-Rez studios umbrella, including top management. But separating the teams this way reinforces team identity. “We are trying to kind of segregate the teams a little bit to have our personality swaps be a little bit more controlled, predictable, and voluntary,” he explained. Folks who feel like they would be a good fit for a position within the other studios and want the new challenge can still put in for that position. On the other hand, those who want to remain with the one game where they have invested so much of themselves can do so.

Will this split affect the the Hi-rez Expo held in January? Fishman said that all of the studios will still be a part of the expo. However, he also said that it is now being done in collaboration with another world-wide expo, and because of that, the timing might change. So players who want to attend need to keep an eye out for the first announcement of the 2019 expo.

As much as I was hoping to grill more SMITE and Hi-Rez staff for details, Fishman said he was the only employee who got the DragonCon application on in time. (Who knew that presenters had to have those in by January/February?!) As such, I wasn’t able to get tons of details on future plans, but I was able to learn some interesting tidbits.

Fishman’s first comment really took me by surprise; it turns out I am not on the fringes of SMITE players after all. He told me that the arena, not the lanes, is actually the MOBA’s most popular mode. The lanes, he said, are the meta of SMITE.

If you were hoping for a reveal of new gods at DragonCon, you will be as disappointed as I was. A new pantheon is coming, and two new gods are soon to be announced, but Fishman said he couldn’t share any more than that yet. He did say that players can expect the gods and pantheon to appear at the end of this current season. Speaking of gods, in response to a question during the panel Fishman shared what goes into the decision process for what gods and what skills come to the game. He said,

“If we have to pick, we sacrifice everything else for fun. Fun is the most important priority. I love leaning into the lore. The times that we can be super lore accurate, that makes me so happy. But if I have to choose [between] ‘this is exactly how it says it in the lore’ and ‘this is a little less accurate but way more fun,’ I’m going to choose fun every time.”

Fishman pointed out that he personally isn’t one who decides on which gods, but he explained that factors in the god selection process includes name recognition (what gods would fans be excited for), diversity between pantheons as well as between gods, goddesses, and less humanoids, and interesting mechanic hooks. And ideas can change. He shared that The Morrigan was actually born from an idea for an ultimate that he pitched for Erlang Shen.

In response to another question, he explained why it seems that gods are buffed and changed when new skins come out. Instead of being a cash grab, he said it was so that players don’t have a larger patch download than necessary; bundling different aspects of work on a single god makes sense since those files are already being utilized.

Since SMITE’s adventures are my favorite part of the game, and Fishman is the lead on adventures, it made sense to focus some on this aspect of the game. Unfortunately, he wouldn’t divulge anything about the upcoming adventure (which will hit in patch 5.21), but he did discuss a bit of the process in creating adventures. He said, 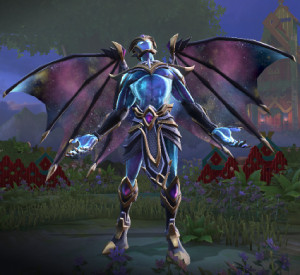 The development process of the adventures, he said, changes at a very rapid pace, sometimes sprouting from one idea and then morphing quickly. On the other hand, the current adventure, a classic joust mode, was really just bringing back an older mode, which brought with it a dose of nostalgia for many players. Sadly, players can’t use this as a gauge for the return of any other mode or adventure. Fishman said he cannot confirm nor deny any of the favorite adventures coming back, not even his favorites (which are capture the flag, Medusa’s deathmatch, and the corrupted arena).

What about making an adventure a permanent game mode, or adding new game modes period? Fishman said this wasn’t likely. He explained,

That said, that doesn’t mean it is an impossible idea. He emphasized that the Titan Forge Games is open to making an adventure a full-time mode — if it really takes off in popularity. However, none have achieved that yet. There has to be very good reason to add more queues in. The match of the day idea, however, is a is a space where something like bringing back the classic joust could happen.

Everyone playing Smite regularly knows Arena is the most popular mode

I look forward to your coverage.

Make My MMO: Looks like Edengrad and Divergence Online are abandoned