Massively OP’s MJ took a tour of the gorgeous Elder Scrolls Online Summerset reward house last night, and it’s a reminder that ZeniMax is not doing promos in half measures – the house is spectacular.

END_OF_DOCUMENT_TOKEN_TO_BE_REPLACED
I say that first because ESO’s next event also has a sweet reward, though this one’s a mount rather than a house. It’s called the Nascent Indrik mount, and it’s pretty much a ki-rin.

“Traditionally found roaming the isle of Summerset, Indriks are especially powerful magical creatures, and they can provide a challenge for even the most experienced adventurers. While it is possible to hunt them in the wild, it is now also possible to acquire one as a mount, too!”

To get one on your account for free, you’re going to have to take part in four different events from Halloween through New Year’s, so the goal here is clearly to get people logging in and sticking around. If this is all sounding weird to you because you remember when ESO didn’t even have holiday events, I hear you – but free mount. Smack this on your calendar and get ready to go out and collect some feathers:

Smart move PR wise: you need to have the thieves DLC and the Clockwork DLC to play this quest chain. So either you pay up by subscription for at least 3 month ($45) or you buy the DLC’s which isn’t much cheaper if you don’t already have them. And the Indrik shown is clearly not mature and is indeed called a “Nascent Indrik” with further event explanation stating that they plan follow up quests for this mount and have “big things in store” for it. Likely making it necessary to have access to more DLC to grow and mature it into a full blown Indrik.
Nascent Indrik: 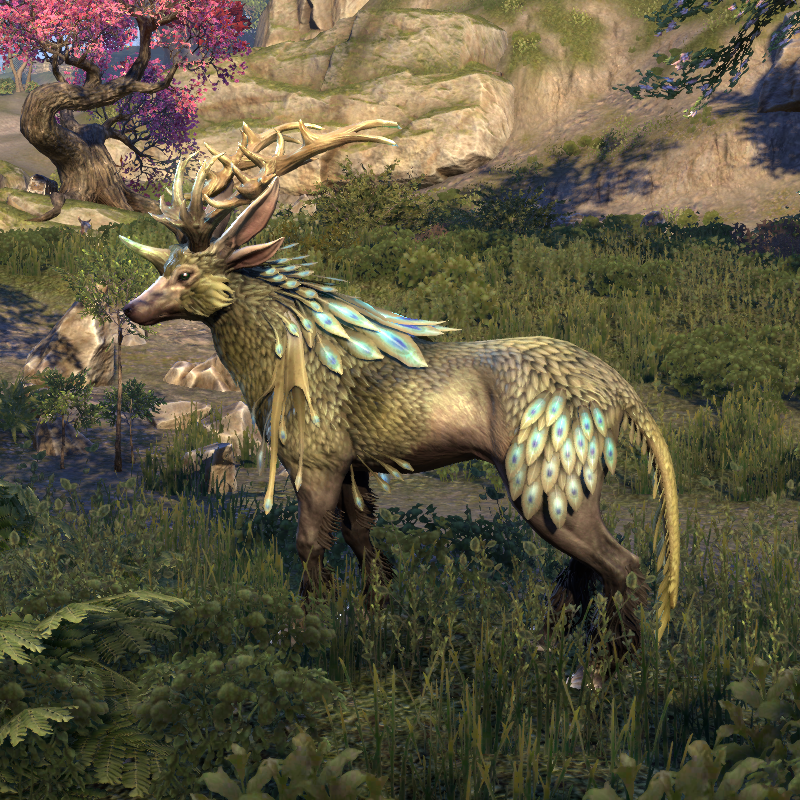 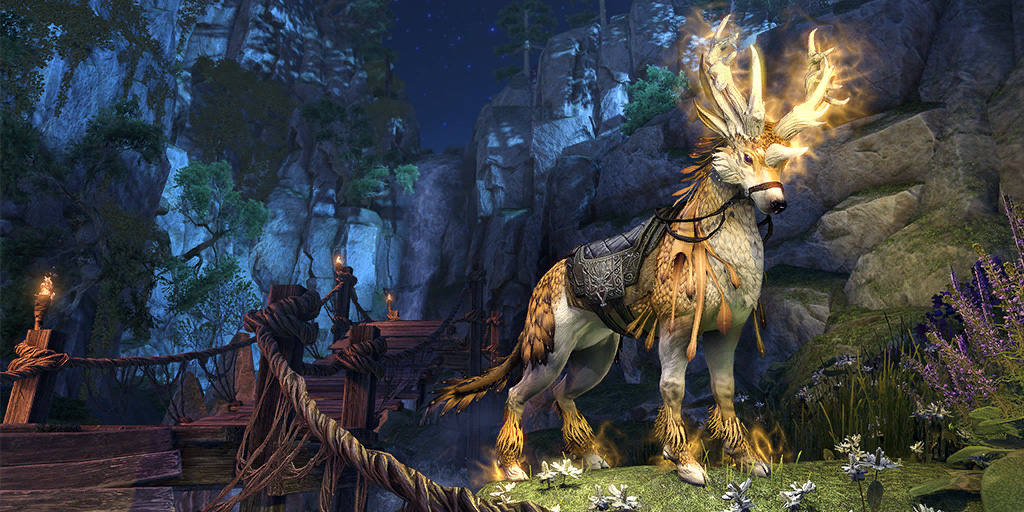 The Psijic Manor House, Mount, and Pony were “free” during the summerfall event.

This mount on the other hand should be considered an “earnable” reward, which is great feature imo!

The Undaunted one requires queuing for raid dungeons.

Thanks for letting everyone know so we don’t waste our time.

Phew. In that case, I don’t have to bother reinstalling ESO.

(Ironically, not having the 1000 gold for a mount is one of the reasons I uninstalled it in the first place, but still.)

The new level up rewards from earlier this year now give you a mount for free when you reach a certain level. Somewhere between 10 and 20 (I don’t remember exactly).

Oh, is that so? In that case, maybe I’ll check it out again if I ever get bored of Warframe.

But certainly not without considerable effort. It requires the grinding of a daily activity from one of a number of events to earn an item one a day for ten days to get a feather and then the same from three more events to get three more feathers for a total of four feathers (and 40 days) in order to earn it.

The grind…. why do these things always have to be the payoff for a grind. Why can we not have events that award actual normal play like complete X storyline, do X dungeon, level up X times within a certain time period. Why does it always have to be endless repetition of the SAME things over and over.

It is so uninspired as a source of motivation for the evtnual payoff. :(

Gameplay is rewarding in itself, else people wouldn’t play the game. Dumping ‘extra’ rewards on players sounds good, but people eventually tire of the same things.

The developers need achievements to feel like work, so people become invested in the game. This way, when players are presented with something new, they’re more likely to stick with their investment.

Remember, you’re not really a person to most businesses. Humanity has determined that socialization and work should be kept as separate as possible. It’s just too difficult to rip someone off if you get to know them first.

We are all there for the gameplay, they want us to enjoy the gameplay.. so why detract from that and instead incentivise a grind? its contradictory.

Much better they reward people enjoying the best the game has to ffer then detracting them from it and incentivising the worst.

Far more likely to get bums on seats and keep investors happy imo :)

I am with you on this one. I was just thinking the same thing today when I read about this event. This mount looks very cool and I wish I could get it, but there is no way I could force myself to do the same repetitive quests so many times every single day over 40 days.
But I guess some people enjoy doing repetitive dailies and consider that fun game play? And maybe its just easier for the game devs to make simple daily quests than try to be creative? Sometimes I wonder if I am playing the wrong genre of games.

Well, look at the actual things you have to do:
1. Witches Festival: You will get a ticket with the first Plunder Skull you earn in a day. In previous years, you got Plunder skulls from killing any “boss” type character (Delve bosses, World Bosses, Dolmen Bosses,Dungeon Bosses. I can’t remember if quest bosses counted, but I think so). You have to spend your day crafting to not kill at least one of them per day.
2. Clockwork City event: You will get a ticket with the reward for the first Clockwork City daily you do each day. There are two World Boss dailies and two Delve dailies, along with the Crow dailies, which I’m not familiar with. You could just do one of them per day and you’d repeat them maybe once?
3. Undaunted: Complete a dungeon (normal or veteran): “You will receive three Event Tickets from the final boss of the first dungeon you complete in addition to the normal rewards. You don’t have to be in a random dungeon LFG group to earn your Event Tickets!” You can try to solo Fungal Grotto I if you really don’t like grouping with people. Or you can ask a few friends to join you and see how it goes. If you don’t usually do dungeons, you will also earn trophies to put in your house. And at 3 tickets per last boss, that’s a feather in just over 3 days.
4. New Life Festival: You get a ticket with the first daily reward from the New Life Festival quests. So again. You only need to do one of the quests per day, and they take 5 minutes at most. The majority of players will be going through all quests daily, sometimes on multiple characters.

They are making this really easy, and you do have the chance to get more tickets from an event you like to skip one you don’t like.

Still amounts to a grind as I said before, you still have to do these activities FORTY times total, Repetition of the same things is not fun.

As I said they would be far better off working these sorts of things into how people normally play so they can earn the benefits by enjoying the content they normally do through usual play as opposed to repeat grinding the same dull monotonous quests.. irrespective of how easy or hard they may be.

I would much sooner an event I enjoy than one where I essentially asleep and counting the seconds wanting it to be over already :)

You have to do 30-40 different activities over a 2-month period.
You can choose to skip some things you don’t like and none of the activities are time consuming.
Which of these activities do you not like doing? What would you have players do instead for them to earn a ticket per day (or 3 in the case of the Undaunted event?)

I find that ESO players enjoy daily quests enough that even in zones that I consider “outdated” there always seem to be people doing them when I go through questing, and this event offers enough variety that people are able to get tickets by doing what they enjoy.

Don’t confuse people “doing” dailies, with people “enjoying” dailies. If given a choice of playing throuhg content normally, or doing repetitive dailies.. you don’t need to stretch much to know which people will pick.

So again, why incentivise things people would rather not do, than the things they rather would?

But we have the choice of doing just that. I just got my main character through the Wrothgar questline and map completion. I’m just missing 3 encounters with the solicitor and vet Maelstrom/flawless for completion. But I was in the mood for questing, which is not something I always feel like doing. I also enjoy dungeons. Sometimes I grab the pledges, sometimes I just run a random dungeon. Other times I PvP. Or I take part in guild events that encourage map completion or achievement hunting. All these things are enjoyable in their own way at their own time.
And the events to get the mount fit into that without anyone having to get out of their way really.

Though after playing several MMOs since I started playing ESO, I am not entirely sure what “playing through content normally” even means anymore, since you are playing with people who may be at different stages of stuff and coordinating that can be a challenge sometimes.

In the way it was intended is what it means.

Dailies are only there to fill in the spaces between content drops and as such are a filler nothing more (well in ESO also for motif grinds too but that is also another grind). They certainly don’t pass for exciting, interesting or entertaining content, but rather repetitive and monotonous.

As I said given a choice of actual content and dailies its a no brainer what people will pick. And it isn’t dailies heh