Guild Wars — the first Guild Wars — celebrates its 10th birthday this week alongside several of my characters who are equally old. I originally picked up Guild Wars as a diversion from World of Warcraft, and at the time, I liked everything about it but actually playing it. Pre-Searing felt like home; it was pastoral and lovely with a haunting score. But back in 2005, the game past the Searing was difficult to traverse in a small party, let alone solo, and the deeper into the game I got, the less I liked it. In fact, I didn’t Ascend in 2005. I gave up on the grueling PUGs right around the time I got to the Crystal Desert.

But I went back, and went back again, and eventually I fell in love. That’s just the first of Guild Wars’ many lessons. Here are 10 things I learned from Guild Wars — in honor of its 10 years of fun.

#10: Always give MMOs a second chance

MMORPGs change. You change. Of my top five MMOs of all time, every one of them was enriched with time and age, and I enjoyed myself far more after leaving and coming back. Guild Wars grew up along with me. It added landmasses, campaigns, classes, skills, gear, stories, missions, dungeons, and a parade of significant quality-of-life improvements that I would have missed out on if I’d assumed the game had stayed the same forever and never given it a second chance to capture my heart.

I won’t stand before you today and proclaim that Guild Wars’ storytelling was amazeballs. It has some truly ridiculous plotlines. Prince Rurik? Shiro? More funny than serious. Still, given its 2005 timestamp, the story’s not bad at all, and it had its work cut it for it besides — no MMO to date has truly solved the problem of shoehorning millions of people into a lone hero’s journey. It did a spectacular job with the available tech; it had multiplayer cutscenes that told a story back when most other MMOs were just shoving players toward the next static quest-giver at best. And while Rurik is a punchline 10 years later, other characters weren’t. There were heroes — like my favorites, Koss, Margrid, and Vekk — whose names and personalities I remember even when I can’t recall what I named my own Assassin. Compelling companions increase my fondness for the game tenfold.

#8: Trading makes me as happy as crafting does

Guild Wars’ crafting system is not a crafting system; it’s a destroying system combined with an NPC button that turns stuff into better stuff. That should have turned me, a hardcore crafter, off to the game, but instead what I found in the cracks between the mechanics was an entertaining player-driven trading system. Sure, I might have preferred less Spamadan and fewer trips to out-of-game auction websites, but I managed to buy and sell hundreds of weapons and other drops over the course of my years in play, netting myself a large fortune mostly by my lonesome. Had I stuck to my crafting haunts, I might not have focused as much on trade and might not have realized just how much I enjoy it independent of crafting.

#7: ‘Massive’ isn’t about the numbers

Guild Wars was not marketed as an MMORPG, even though I will forever argue it was one. Outside of instanced hubs, the party size for most adventure zones and missions — also instanced — was eight. Travel between places you’d already visited was accomplished with a few clicks on a map. Most of the time, you were hanging out with a max of seven other people, raids and PvP notwithstanding. And you know what? That game felt massive. It felt huge. The map and the zones always managed to make me feel like a tiny speck on a vast landmass, and the world encouraged people to go out and explore it, not just with exploration titles and scenic vistas but with elite capping, rare boss drops, and special NPC crafters and collectors tucked away in unusual corners. Massive really isn’t about open-worlds or population numbers. Massive is a feeling.

Prior to Guild Wars, few Western studios had put significant effort into building their fantasy MMO worlds upon anything but Tolkien and D&D. ArenaNet threw itself into working distinctly multicultural settings into the game — feebly, in my estimation, with Prophecies’ Krytans — but then with Factions’ East Asian, Gothic, and Greek islander stylings, and Nightfall’s North African motifs. Utopia, the canceled campaign that was recycled into Eye of the North, was meant to evoke indigenous cultures in Central and South America, and you can still see its influence in Asuran garb and architecture in both Guild Wars and its sequel. It was refreshing eyecandy, darnit, and I wish more studios would borrow from the real-world cultural palette right in front of their eyes.

#5: Soloing can be just as challenging as raid content

Soloing — or rather, playing alone with your henchies and heroes filling out your party — was a point of contention within the Guild Wars community for many years. It probably still is today, now that everyone can play the game with seven heroes and no real need for another player through the vast majority of content. Regardless of your opinion on how that affected the community, Guild Wars demonstrated that it is in fact possible to design content that is genuinely challenging both for groups and for soloers. It took a great deal of skill and care to properly equip heroes with gear and synergetic builds and then to actually manage the group successfully in fights, especially in hardmode dungeons. Very few MMOs focus on challenging soloists or small parties, and Guild Wars proved that it most certainly can be done. 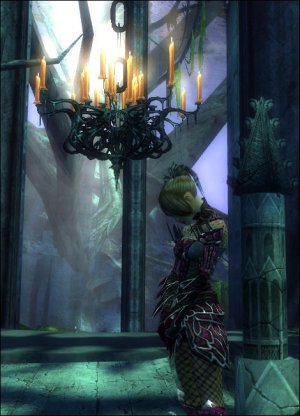 In 2005, Guild Wars boasted one of the first iterations of a hybrid cosmetic gear system in an MMO, and the fact that the game made fabulous armor styles the most expensive items in a game with an otherwise flat power curve meant that everyone was focused on figuring out ways to afford the swankiest duds. It really was a fashion show, one in which wealth was completely irrelevant to combat but incredibly important everywhere it didn’t functionally matter. I stood around people-watching as characters dressed in creative colors and armor combos zoned in. It was awesome, and it, along with City of Heroes, convinced me that MMO players really don’t care as much about combat power as devs think they do. We’ll get in line to grind for a fancy hat just as quickly.

#3: Subs never were the only way to sell an MMO

There were some scattered free-to-play MMOs around back in 2005, but Guild Wars was the first mainstream MMO to adopt a buy-to-play, subscription-free model that looked a lot more like Diablo II than WoW. It’s old hat to us now, but at the time, we thought it was revolutionary. We’d never seen a “real” MMORPG charge less than at least $10 a month. Sure, ArenaNet got more than a sub’s worth of money out of me thanks to campaigns and expanshalones and character slots and bank bins and costumes — all of it because the low barrier to entry allowed me to come back and play so easily. Guild Wars proved the now-popular B2P model was workable for MMOs, not just small multiplayer titles.

#2: You don’t have to ape WoW to succeed

Sometimes in looking back at the history of MMOs, I think we put far too much importance on the impact WoW had because we know that the so-called “WoW clones” of 2007 struggled in its wake. Guild Wars didn’t struggle, though. It came out in 2005 just as WoW was building momentum in the west, and it did very well in spite of being WoW’s polar opposite. It did so well, in fact, that it got a AAA sequel, and it did so at a time when other MMOs were being cannibalized by Blizzard’s behemoth — all it had to be was different.

ArenaNet earned the eternal devotion of so very many MMO players when it put Guild Wars in maintenance mode a few years ago rather than sunset it unceremoniously ahead of Guild Wars 2’s launch, setting a new genre standard that unfortunately came too late for some of my other long-lost favorite MMOs. Knowing my characters and all their stuff is waiting for me to return is extremely comforting in a fast-moving, volatile industry. Sure, Guild Wars has a sequel, and that sequel borrows heavily from its predecessor, but it’s not the same at all. MMOs really don’t have to die, and we as players and studios shouldn’t let them. Guild Wars is living history for anyone who wants to experience it even 10 years later. Happy birthday, Tyria.