Early on in this month’s Choose My Adventure, a reader in the comments mentioned that RuneScape is the perfect game to have a CMA, and I’m inclined to agree. That said, our final activity for this month’s edition was pretty much the kind of barbed hook that I could see getting snared on and reeling me in to the game for the long haul, ignoring nearly all else Gielinor has to offer; Dungeoneering is by far and away some of the most fun I’ve had in this game.

Getting to Daemonheim was simple enough, and arriving to the location definitly impressed, with its stark white and gray landscape and overall creepy vibe. From the off, we got the impression that Dungeoneering would be unlike anything else this game had to offer. Then we figured out that we couldn’t actually enter a dungeon unless we removed every piece of equipment and every item in our inventory, and a bit of apprehension began to set in. What have we gotten ourselves in to?

Reluctantly, we ceded to the activity’s demands, stuffed our belongings into the nearby bank, and made way for the dungeon. 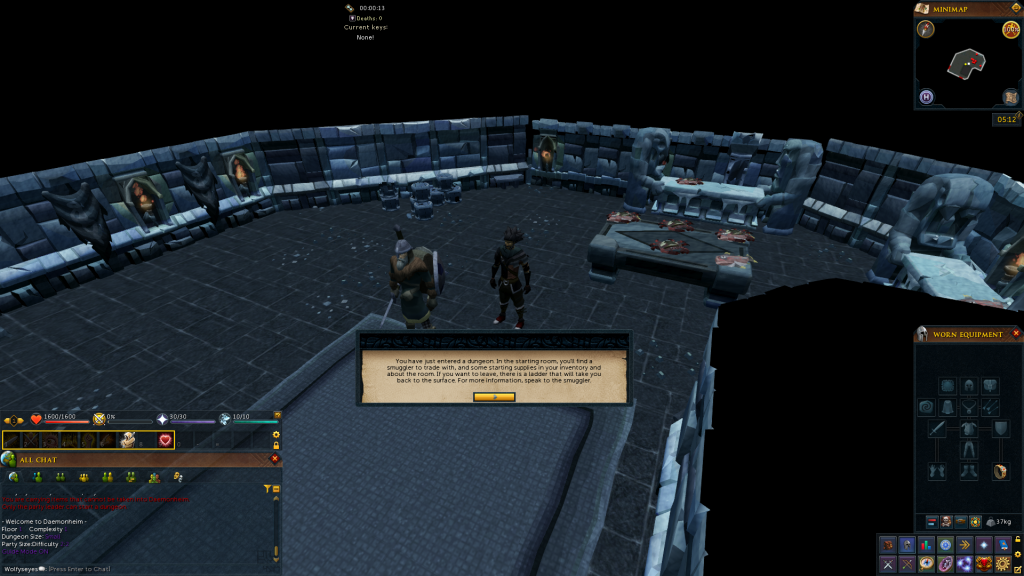 I forget what type of tileset we went with — I think frozen? — but almost immediately our intimidation began to ease up as we arrived in the dungeon’s ready room. The tables and shelves were loaded with food items, our inventories had weapons and gear of all sorts, and instructions were generally clear and concise. Dungeoneering doesn’t kick you in to the deep end, it invites you in and gets you acclimated to the mechanics.

Those mechanics are pretty simple at brass tacks level: Get through the dungeon to the boss room and survive. Clearing a floor furthers the Dungeoneering skill’s XP, which in turn opens up more floors to explore and an adds new levels of a metric called Complexity, which research found meant that we could use more of our skills at the cost of less XP rewards at the end.

The removal of our personal gear was strictly due to the fact that everything you use within the dungeon is specific for the content. Food items, equipment, resources, and even currency are insular, adding an intriguing layer of survival lite mechanics to the proceedings. This wrinkle would definitely be important within only a few moments. 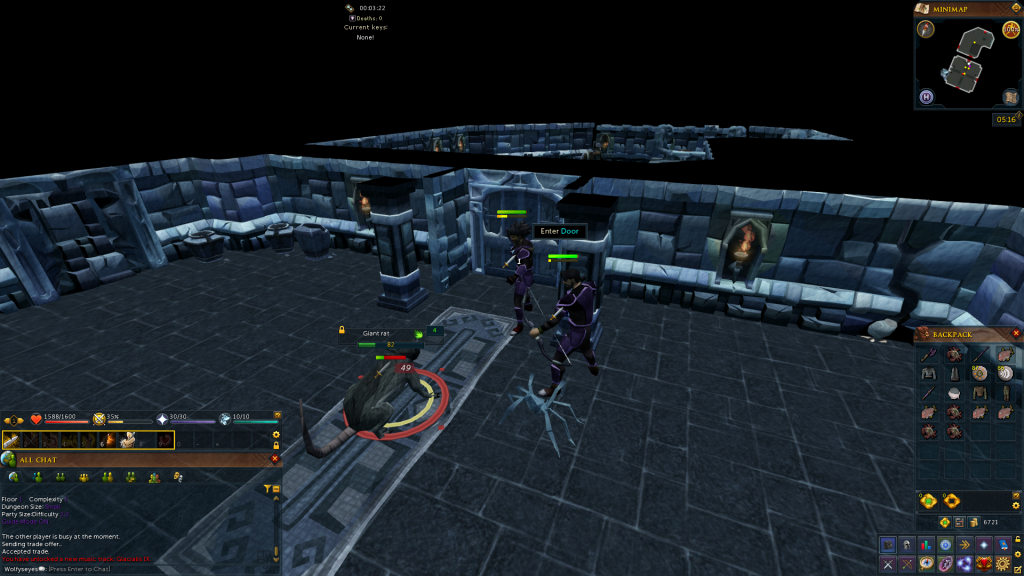 As we pressed on into the depths, we found out that being handed equipment was less common, so we had to begin seeking out materials to gather in order to craft equipment. This suddenly began to raise the stakes just a bit more, but not in a stressful way; once again, RuneScape paves the way in terms of onboarding fresh faces to the way things work with a learning curve that feels natural and makes perfect sense. From the lessening number of items to the increasing difficulty of the monsters, our ride moved at a reasonable slope without smashing in to a wall.

The dungeons themselves are your typical randomly generated fare, with rooms linked to one another in various shapes and sizes. Each floor was very much like playing a level of Doom: you move from room to room, killing baddies and looking for appropriately colored keys to unlock matching doors. That’s not meant to diminish the content, though, as this kind of old school dungeon delving gameplay absolutely suits RuneScape. In fact, it’s less Doom and more Wizardry.

The final boss fights, at least as we experienced them, are where things fall apart just a wee bit. I expect it’s because we were in the early floors and hadn’t opened up more levels or tilesets, but all that we had to put up with were HP sponges and the occasional added enemy or attack that forced us to stay out of the fire. Hardly thrilling stuff, but an alright cherry on top of the Dungeoneering sundae. 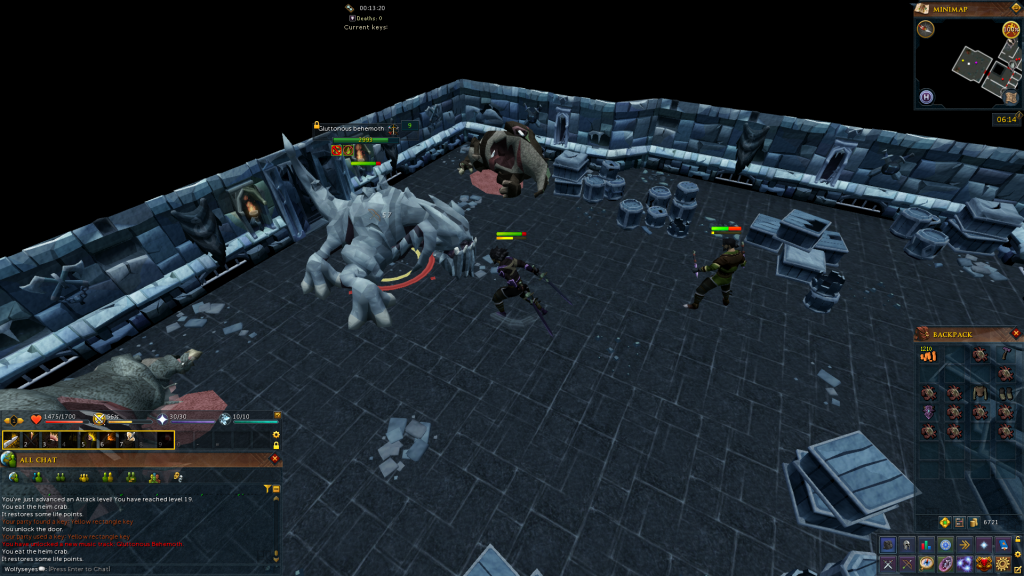 Clashing work schedules unfortunately limited play time together for myself and my husband, but even our short few hours within RuneScape’s stew of old school dungeons, survival gameplay, and insular progression felt really good. What’s more, doing the activity felt really rewarding. You’d think that doing an activity where no physical rewards can be brought out of the instance would be a disappointment, but the XP earnings were real and helped with leveling up significantly.

Dungeoneering feels like a better version of the Palace of the Dead content that Final Fantasy XIV did, though perhaps that’s owing to RuneScape’s old school style and charm. While content like this feels a bit weird in FFXIV even though it works perfectly well, this kind of thing feels appropriate to RuneScape somehow. Something about the game’s whole old-yet-new vibe just fits in more and makes greater mental sense to me. It also helps that it’s simple yet satisfying. What’s even better is that simplicity is totally adjustable. From what I could gather, nearly every aspect of the Dungeoneering experience is modular, letting you adjust parameters to suit your mood or playstyle or group.

While I’m certain you can do a lot of this stuff by yourself and have a fine enough time, I personally am glad I went ahead and brought someone with me. This really is an activity that’s best suited for at least a duo and at best a full party. If anyone reading this is thinking about trying Dungeoneering for themselves for the first time, I highly recommend bringing a friend. 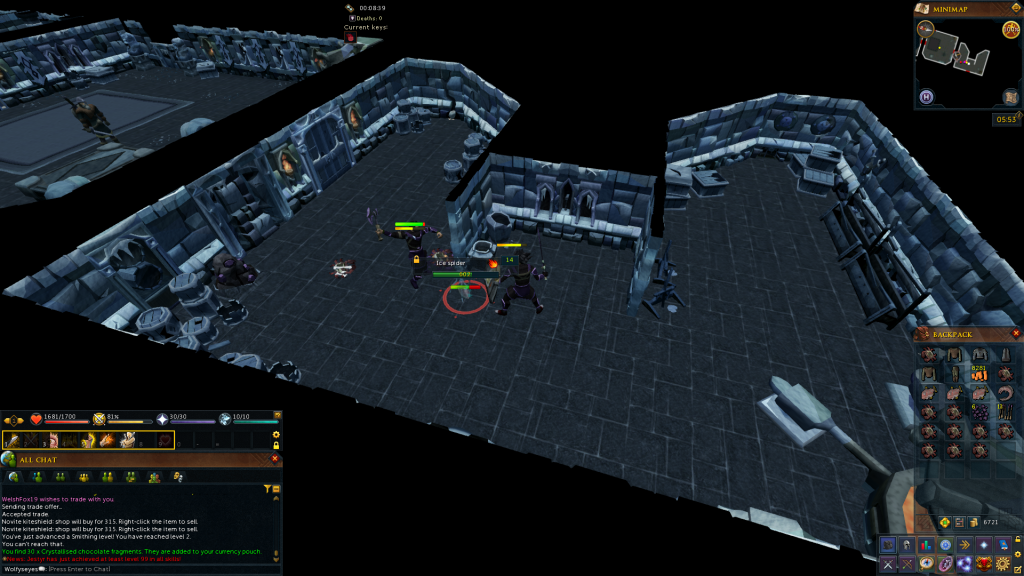 That will just about wrap it up for this month’s CMA, so you know what time it is: Poll time! I’ll go ahead and let my husband do his own thing for this coming month’s adventure and hop in to our next game solo, but I had an idea for this next round.

As a damn dirty casual, I spend a lot of time in a variety of games, and those games tend to sink their hooks in at varying depths. Sometimes I play for a long while and then just stop entirely, or sometimes I dip in and out over the course of a year or two, slowly making progress on characters. The point is, there are a few MMOs that I’ve got higher level toons on and I think this column is as good an excuse as any to slip into those old clothes. It’s also a list of what I consider to be lesser loved but still solid games, so perhaps disappointingly there’s not going to be any white-hot titles in this list. That said, here’s where I’m thinking of heading next:

Now then, which oldie but goodie am I firing up next? Choose my adventure!

Which game should be my next chosen adventure?

As ever, polls wrap up at 1:00 p.m. EDT this coming Friday, April 26th. Next week, I’ll wrap up my time with RuneScape and ponder how gaming with a significant other changes things, but for now I’m kind of hoping to get a few more floors in before I have to get to work. If only my husband would wake up…

Sorry, no choice from me on this one. Just not interested in any of these enough. :(

Would have liked more choices.