A month ago, Amazon Game Studios told testers of its upcoming MMORPG survival sandbox New World that it was pulling down the always-on alpha on June 3rd, and it’s now made good on that plan. At the time, Amazon explained that it was working on “major new features” and “changes to the world that could be disruptive,” hence the closure of the alpha, though that didn’t stop gamers from worrying.

“New World had a lot of rough edges and we weren’t sure players would embrace what we were striving to create,” the studio wrote today in its message confirming the end of the alpha. “But, as players started venturing into New World, we started to learn along with them what was working and what wasn’t. We had an opportunity to see the game through the eyes of thousands of talented and committed gamers and we liked what we saw. We’ve been blown away by the passion and commitment of our Alpha Tester community and we’ve taken their feedback to heart. We’re very optimistic about New World’s future and we’re going to take time to add the content and features that our players have asked for.”

There’s an infographic to entertain you (and mock your many, many in-game deaths!) while you wait for the next round of testing. 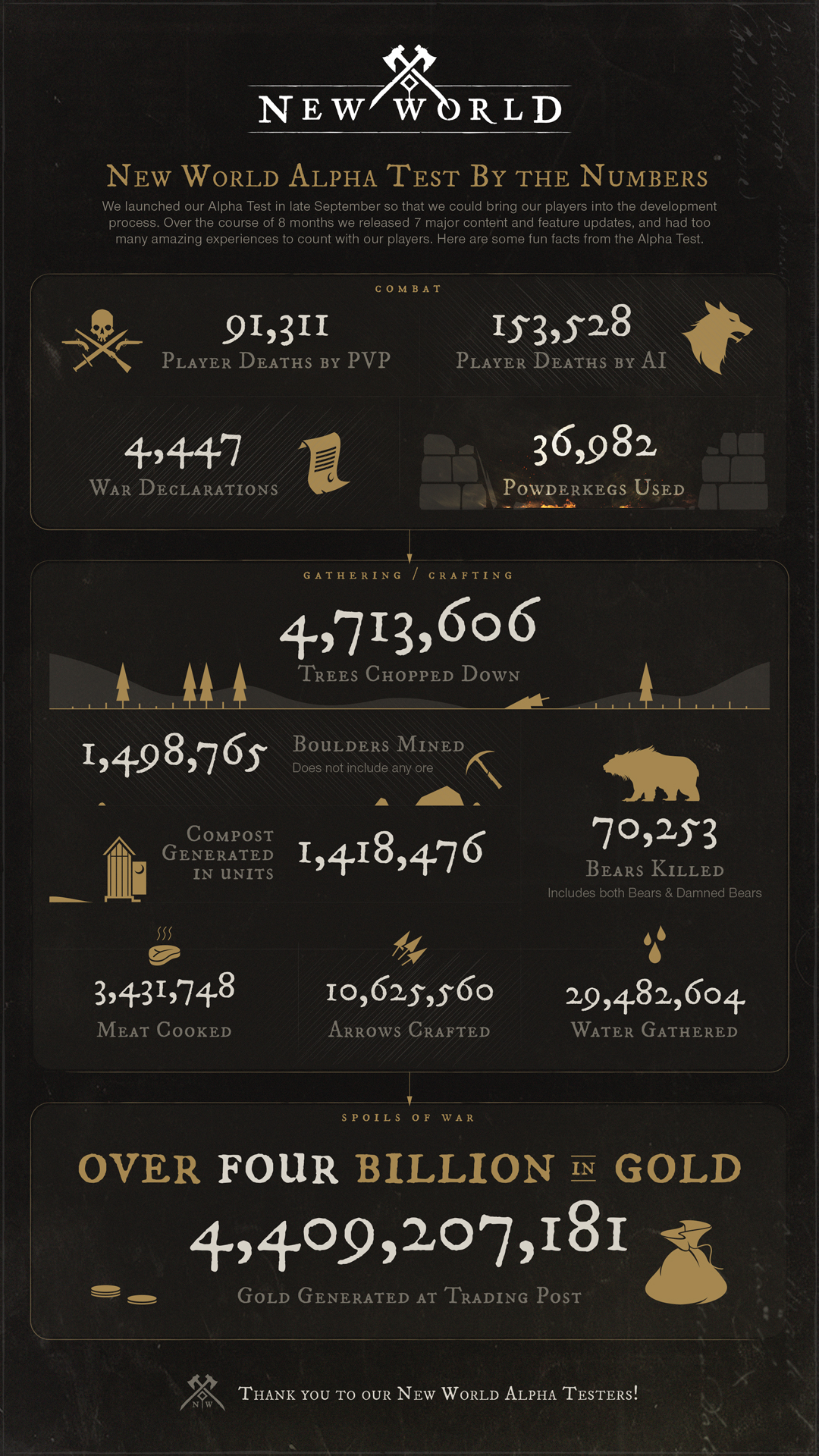 Thank you all for joining us for the first phase of New World Alpha Testing! ⚒️

Learn about some of the amazing feats our Alpha Testers accomplished below.

Hopefully they went back behind the curtain to make a mmorpg proper.

I learned pretty quickly this was not a game for me. It’s a real shame, because it had a lot of potential for good stories… but it went the way of a gankfest.

Now, I cannot figure out how to stop getting updates about this from Amazon. When the first teasers came out, I clicked on the “preorder” button to learn more. Since then, they removed the preorder option so there’s no way to undo it. The emails have no unsubscribe option, either. I have spoken with Amazon services to unsubscribe. They told me they did this, but I’m still getting updates. I expect better of Amazon regarding unwanted notifications.

Yeah, same here. I have even been hitting the “Report Spam” button in Gmail to try and stop getting those stupid emails.

Whenever I see these boasts it rings hollow, no matter who is touting their metrics like it proves something is good. I still find this game’s setting to be problematic and these survival gankfest games are a dime a dozen anyway.

So are their factions in this game ? because without them it will only lead to it being yet another gankfest .

The engine, graphics, and what little PvE there was in the game was brilliant.

The forced PvP, however, ruined the fun.

I love this project.

So more than a third of all deaths during the entire testing period were related to players killing other players, definitely not a game for me then.

Yep. I’m well past the whole “Interesting” prior to reveal of details part, and long since in “That’s where they went, oh well, it’ll die along with the trend toward quick cashout games with no longevity, and eventually things will move on within the gaming space…”

I enjoyed everything except the forced PvP and conquest.

It was a stunning realm. That’s not enough reasons to keep playing as its cross breed of RPG/survival/conquest quickly dwindled in charm. Looking forward to a significant mechanics update. Something worth continued logins and a potential purchase.