This week, fellow Massively OP writer Justin published a post on his personal blog detailing a pet peeve with his favorite MMO. I find it interesting that even with our favorite games, we’re always able to pick out one or two things that we’d like to see fixed. These quibbles are not game-breaking, typically. They’re simply annoying little foibles that earn our ire – and sometimes a place in our hearts.

END_OF_DOCUMENT_TOKEN_TO_BE_REPLACED
After reading Justin’s peeve, I made a list of The Elder Scrolls Online annoyances that nibble away at my nerves. Let’s hash it out in this week’s Tamriel Infinium!

This one goes beyond peeve for many, but I just feel that it’s a poor design choice that should be remedied. If you’re not familiar with gems, just know that the only way to acquire them is to trade-in crown crate items. In other words, you first have to purchase a random item from a crown crate (known in the industry as a lootbox or lockbox) and trade that item in for a certain number of gems. The number of gems depends on the rarity of the item.

There are entirely too many unknowns in this whole process for my taste, and it’s a system that’s designed to keep you buying crates with the hopes of acquiring rare items. While this doesn’t particularly affect those of us who don’t purchase crates on principle, gating special items behind a gem-wall is in poor taste and bothersome.

I typically use in-game chat over in-game mail, so I’d forgotten about this peculiarity. But it was brought to my attention again this week by a new player who was trying to ask me questions over in-game mail. “Where’s the reply button?” he asked. That’s a good question. There isn’t one. Have you ever seen an electronic mail system where every single message you send must be created anew? That’s how it works in ESO. I didn’t even have a good explanation for the poor guy. Five years in, we’re still looking for that reply button.

I couldn’t make a pet peeve list without including the pushy, Orsinium quest-starting orc Stuga. She’s become a meme within the community using her signature line “Do you know how long I’ve been looking for you?” So annoying is this green-skinned maiden that many simply accept her quest without any intention of going to Orsinium just to shut her up. It’s not enough that she repeats the same line over and over, but she literally follows you around the city doing just that. If there were a horror film based on ESO, it would simply be titled Stuga.

This one is a little bit tricky, seeing as how it’s surpassed the annoyance phase and has entered into that strange space where if this bug were to be fixed, I’d actually miss it. Anybody who’s spent any amount of time in the game knows what I’m talking about. Occasionally, when a player character is riding a mount, that player character is seen standing up on that mount and running while the mount is also running. It’s such a long-running problem that it’s become a joke within the game studio itself! Check out this Halloween tweet from ZeniMax: 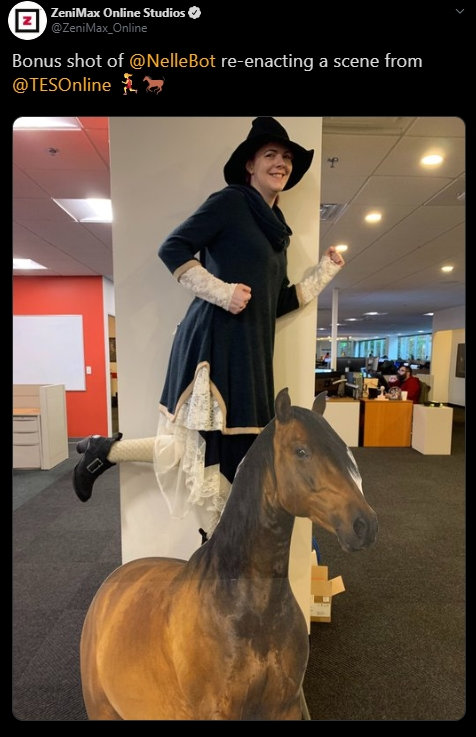 No quick unsummon for pets

Here’s a good one: a pet peeve about pets. It’s happened to the best of us. You run-up to the crafting bench intent on finishing a quick writ or two, but some goofball has planted his/her warden bear or twilight matriarch pet right in front of the click zone. Granted, this contributes only a few moments of frustration, but the effect is accumulative. As a pet sorc main, I do my best to remember to put my pets away in crowded areas but that itself is a somewhat cumbersome process of entering into the skill menu and dragging my pet skills off the bar, only to replace them again when the pet disappears.

My personal belief is that the problem of enormous pets clogging up the populated areas of Tamriel could be lessened by an easier way to un-summon them. Most people who play with pets won’t bother with a multi-step unsummoning process, and some may not even know how to do it, as it’s not exactly intuitive in its current state. I believe that players would be more apt to comply with the guidelines of politeness if there was a keyboard shortcut or button combination that allow us to easily put away any active pets. This type of solution could rid the world of two pet peeves at once, huge pets in public spaces and the current cumbersome unsummoning process.

I’m constantly at a loss with regard to the rules associated with inventory items in the Elder Scrolls Online. Some things can be deposited in your bank; some things can’t. Sometimes you can have more than one of a specific item in your bank; sometimes you can’t. Items that stack in your bags or your personal bank won’t stack in the guild banks. It’s just a real mish-mash of limitations that has probably evolved over time but seems out of place in a game that touts its relative freedom of play.

One of the common complaints among ESO housing aficionados is the limit on housing items that can be placed around your domicile. Even MOP’s resident housing experts were initially excited about the possibilities within the ESO housing system but were quickly disappointed by the item limits, especially for a non-subscriber. I do understand the technical reasons for these types of restrictions. After all, we’re all sharing one big server instance, which means ultimately, we’re also sharing memory and compute resources. But for a player who may be in the game solely for the purposes of housing, roleplay, and cosmetics, this limitation can be a real bummer. ZOS may have put a magnifying glass on the issue last summer when it made the Grand Psyjic Villa (an enormous mansion) the grand prize for all who participated in 2018’s Summerfall community event. Suddenly, people who would have never spent hundreds of crowns on a huge housing option were running into problems trying to fill it up!

No game is perfect. Even the most enjoyable ones are rife with small bugs and annoying design choices. Luckily, in most cases, we can overlook these shortcomings, and over time, perhaps even become fond of the quirks we had at one time maligned.