Before Blizzard’s bit of October unpleasantness, I was genuinely excited for the Switch release of Overwatch, though somewhat confused since it’s clearly so late in the game’s lifespan. While some folks are still torn about the ethics of supporting Blizzard, I personally feel comfortable enough jumping back into the studio’s games – including Overwatch on the Nintendo Switch, whose launch was entirely overshadowed by the politics of the Blitzchung incident.

Now that we know your loot will carry over into the “sequel,” I feel like I can focus on looking at the game in a specific context. You see, I actually already owned the game on PC and PS4 and vastly preferred the PC version. The problem, however, is that I’m out of the house so much these days, I mostly play mobile titles. Enter the Switch.

You’re probably reading this just to know where the Switch version lies in comparison to the others versions, so let me get straight to the point: Overwatch on PC feels like the definitive version of the game, PS4 feels like the mainstream version, and the Switch version feels like a stopgap for when you just need to play a mobile version of the game. There, now you can invest all your time appropriately waiting for whenever Overwatch 2 comes out.

Now, of course, I am biased. I favor PC because I feel we get the most amount of control on this platform, and I can certainly feel the control limitations when I’m on consoles. Diamond-ranked PS4 players have jumped on voice to compliment my Mercy, but I always felt like I wasn’t even at 50% of what I could do on PC.

We’ve heard it time and time again that keyboard and mouse is optimal and controller folks just can’t compete, and it feels true, especially on the PS4. That being said, if you’re fine with a controller, clearly you’ll want to stick with the PS4 or Xbox version. Possibly the docked Switch will work too though.

The addition of the gyroscopic controls from the Switch don’t seem to add anything substantial, but that can be turned off, and the Switch pro-controller is similar enough that my PS4 muscle memory occasionally kicked in, even though I haven’t played in almost a year. While I can more easily feel the occasional auto-correct feature on the Switch, it’s just not nearly as tight as Splatoon‘s controls, especially in hand-held mode. 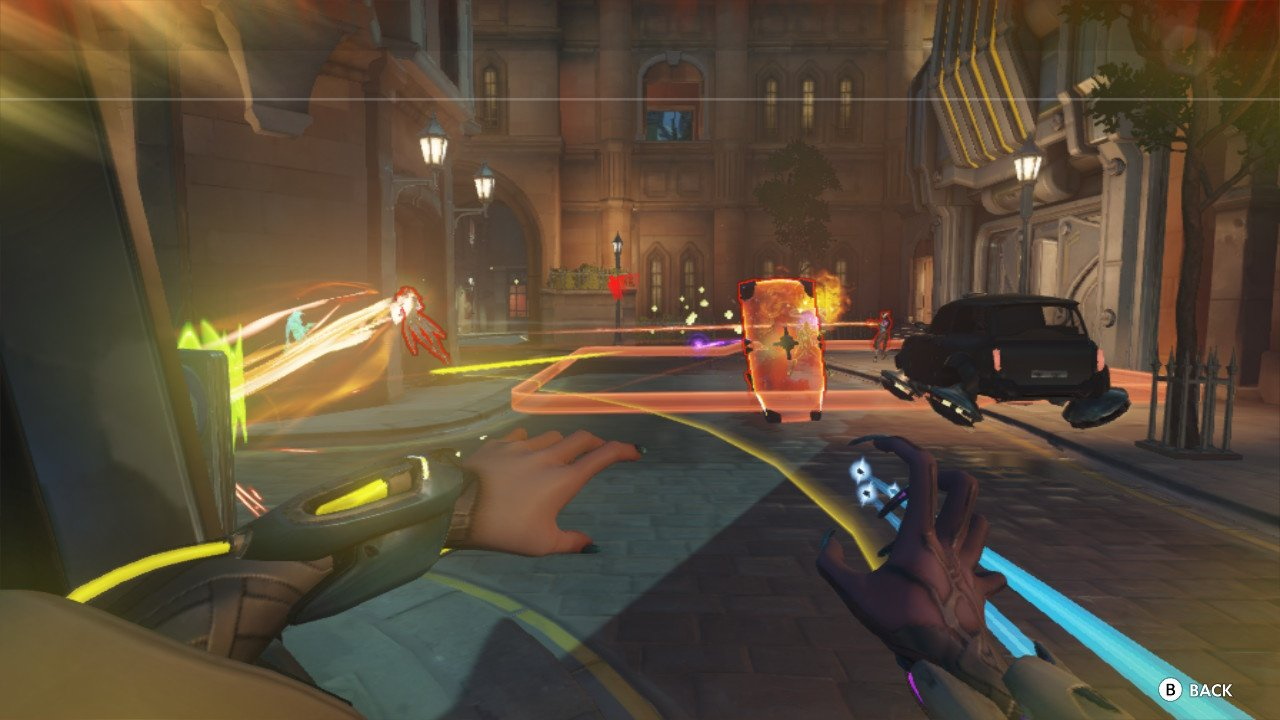 Handheld mode certainly feels more fluid in terms of frames per second. There’s less slowdown than the console version, though admittedly it almost feels like a bullet time moment. I can’t recall any of these moments when picking up the console for the mobile mode. In fact, I played for a while just by tethering the system to my phone connection, which isn’t great for several mobile titles, so I was pleasantly surprised Overwatch could handle it.

In fact, I tried playing the game on the in Mayhem, a ruleset that cuts down on cooldowns so everyone’s flashiest abilities are constantly flying around and stressing the connection, yet I was fine. In fact, my main hangup while playing from my phone’s connection tended to be just connecting to games.

The only issue is that the Switch is a bit large, so combined with motion controls (the only reasonable mobile way to play in my opinion), you still need plenty of real-world space to play and some physical confidence because you’re going to attract stares as you twist and turn to move and aim. Plus, because of the more limited controls (read: no button combos), you’ll have to make choices such as cutting back on your fun sprays and emotes – possibly the camera reset too in favor of communication emotes unless you want to do voice chat. This isn’t a title to play on the train or bus.

Beyond feeling like a combined console/mobile title, Overwatch on Nintendo Switch seems to have a similar community vibe as the PlayStation. Maybe there is a little less voice activity, but it’s still there, though possibly younger. I think there were a few elementary school kids, which admittedly was a bit annoying with open mics, but as a teacher, I favor Nintendo consoles because Nintendo tends to make good games that are also family friendly. Overwatch with its Pixar-esque graphics and attempts to appear inclusive certainly seems like a title I would want my students to experience, so having it available to the Nintendo crowd feels appropriate – in fact, it seems as if it should have been there from the start.

That being said, the Switch crowd also felt smaller. The Halloween event on other platforms tends to be very popular and very short on wait times. On the Switch, though, we had some long queues, even during the final weekend during primetime. It was frustrating enough that I ended up quitting those modes altogether, which was pretty disappointing and something I’ve never had to do on other platforms.

There’s also a solid crowd playing random competitive, but maybe since the game’s new to traditional Switch players, they seem more the minority than usual. Many seem to be adults on voice chat. I saw no one chatting, and there was almost no use of vocal emotes (just “heal me” – and no, DPS dude, you ain’t getting heals when you keep over-extending without a tank). I think console players are practiced at silently knowing how to communicate; two people waiting for support means we’re making a push, or people running out means we need to regroup.

In that sense, the Switch community did feel more casual. I don’t mean that the playerbase seems unskilled, as especially in Splatoon there are players who are used to ranked matches with specific gameplay elements beyond Death Matches. Even Splatoon’s most basic gameplay mode required team play mindset and a focus on more than killing, so I suspect the Switch crowd has already been prepped for Overwatch, perhaps even more so than the broader console/PC crowd with its glut of mindless shooters.

However, without the constant voice chat, text chat, and even voice emotes helping to fine-tune communication, the teamwork never felt quite as tight as on other platforms. I enjoyed my time with Overwatch on the Switch for quick pick-up game matches, but the combination of odd/restrictive controls and lack of a community into high-communication gameplay means I wouldn’t play OW on the Switch as a hardcore player.

Massively Overpowered skips scored reviews; they’re outdated in a genre whose games evolve daily. Instead, our veteran reporters immerse themselves in MMOs to present their experiences as hands-on articles, impressions pieces, and previews of games yet to come. First impressions matter, but MMOs change, so why shouldn’t our opinions?
newest oldest most liked

Overwatch is better enjoyed casually anyway. There are better games out there if you want to do serious FPS.

Blizzard is a garbage company and the people who buy and promote their products are complicit in their anti-Democratic actions as well as the degradation of gaming as a whole.

The truth is we are basically all complicit, other than some hippies living in tiny shacks off the grid in the woods.

Be it the movies we watch from most Hollywood studios, the products in our homes, the video games from many different companies. The vast majority of us are complicit. So what’s worse than being complicit? Being hypocritical.

You’re reminding me of the people complaining about using animal products while wearing leather belts and shoes.

If you have nothing in your house with any components in it made in China, if you watch no Hollywood movies, if you vet every game company to make sure they are completely ethical in every way before playing their stuff, then I apologize. You clearly are a better person than the rest of us.

If not, direct the high horse you’re riding to climb down off your pedestal before dismounting it (for safety reasons) and don’t worry about the people who play Blizzard games.

You can say whatever you want about the company, but to call out the people who still buy their stuff isn’t right unless you are doing everything perfectly right yourself. Which is extremely doubtful.

This is a news site, they report on game news. We need to hear that news. Again, it wouldn’t be fair to just skip Blizzard and not the rest of the game companies doing unethical things, which is a whole heck of a lot of them. We’d end up with some news about a few indie titles in the end. That doesn’t work for most of us.

Reporting on how Overwatch works on the switch is game news, not promoting Blizzard. We hear the good, the bad, the whatever. It’s a report, game news, something I expect to hear about on this site no matter how I feel about the companies who make these games.