You’ll probably notice that last week’s CMA was absent, and that’s because Project Gorgon intimidated me. I basically was scared off for a bit.

I wasn’t scared off by the game, I should mention, but the series of introductory videos that we reported on a while ago. Those things actually were the source of my worry. A lot of them were about the wide variety of choices in the game and how it rewarded exploration, and I very often have problems with that; I tend to have analysis paralysis, and the concerning lack of guidance had me reliving my time in Legends of Aria all over again. So, I chickened out to the point that the column was going to be late.

That said, I finally got over my little brain goblins, fired up the game, and got to work. 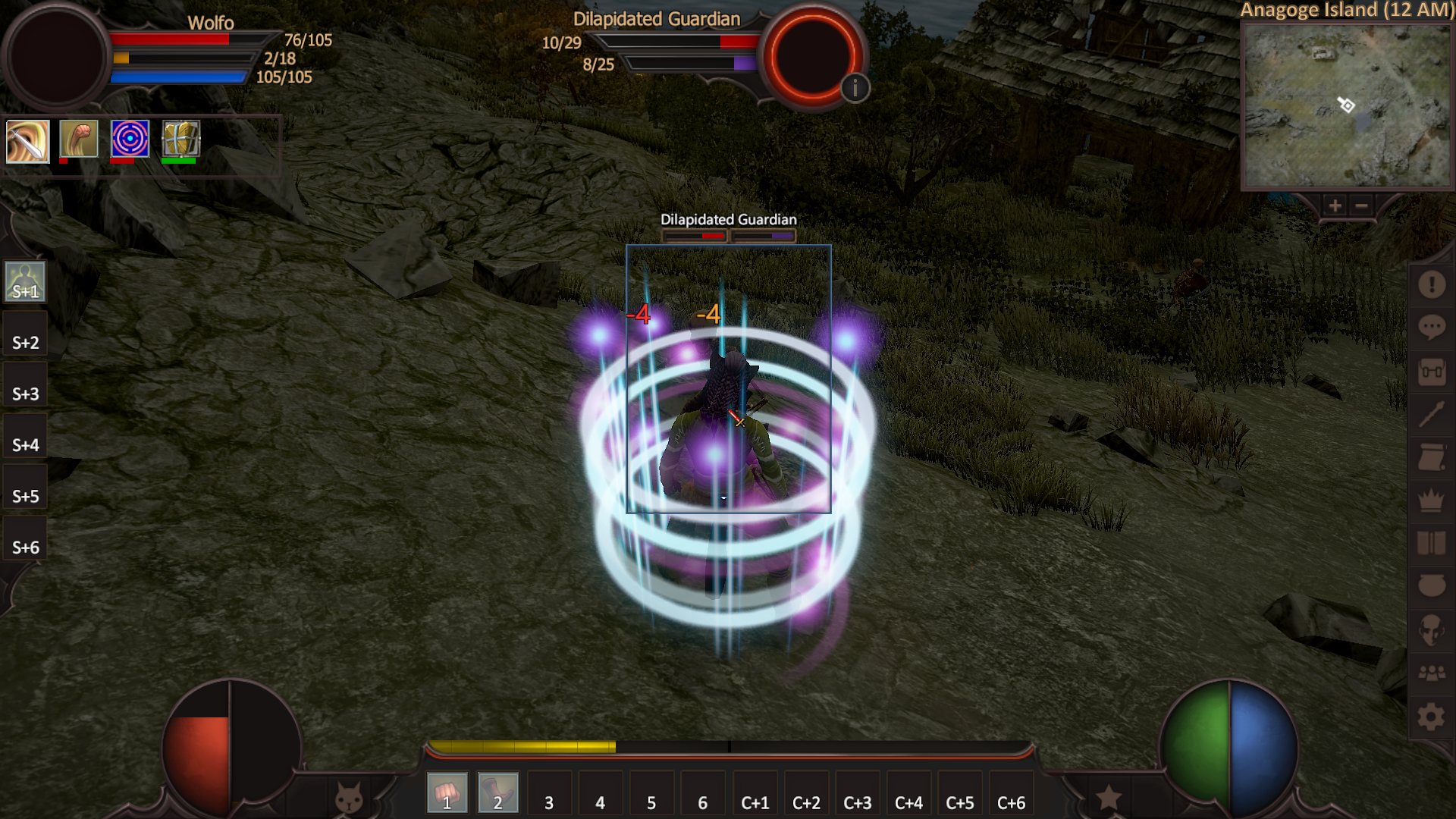 At the interim, almost all of my worries appeared to be confirmed. I was given about three or four pop-up instructions telling me how to do some of the more rudimentary things, and then I was effectively told to just wander around under my own power. The fact that I was also being whaled on by skeletons who had this aggravating ability that left me dazed for a few seconds all piled on to an early MMORPG frustration that I had not felt in many, many years.

That said, those old lessons kept me respawning and trying again. It had to get better. I hoped it would get better. And it did. As I continued to punch skeletons, I started unlocking new skills. Eventually, I got to a point where I was granted a skill that dazed my targets, letting me beat them up while they stood there helplessly. It was poetic justice that I relished in for a probably alarming length of time.

Once I had satisfied my thirst for vengeance against skeletons, I decided to push forward and explore a bit more. Things started getting a little more interesting as skeletons gave way to spiders and wolves. I started getting some equipment drops. I also noticed that most of the equipment I was getting – particularly the green, red, and purple-letter gear – was tuned for using a sword, so I made the executive decision to switch to a sword for a little while as I pushed on.

Then I ran into a couple of NPCs. I recalled the advice to talk to them as thoroughly as possible, which led to quest lines arriving to my to-do list in an organic fashion instead of a cookie-cutter conversation. I met someone who wanted me to perform some requests and earn their Favor. The island I was left to die on started to unfold before me, and my levels of power and confidence started to grow. 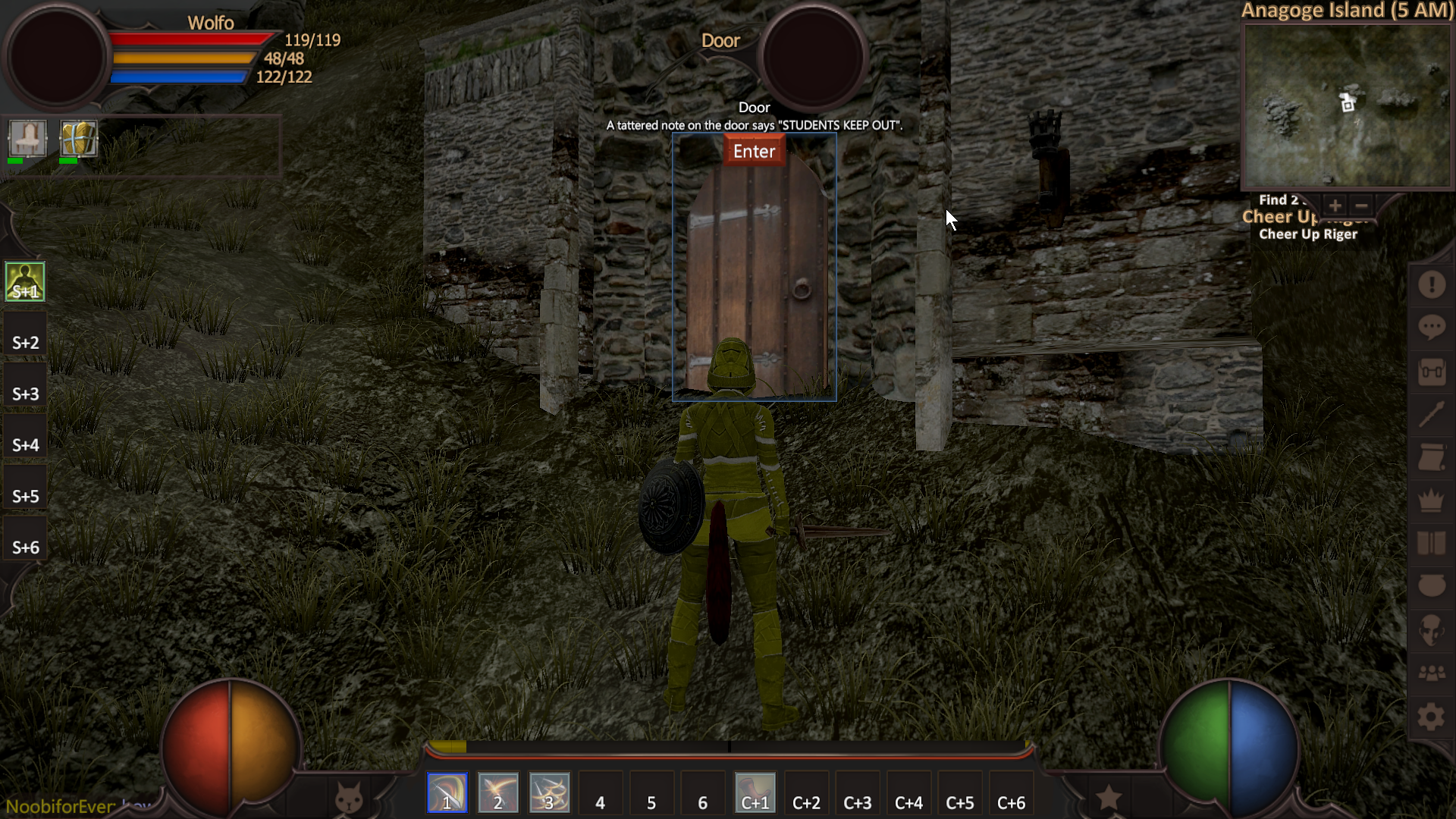 After a bit of ambling around along the shoreline in an effort to find spoons to earn Favor for someone, I ended up finding what I guess would be my first dungeon delve. This wasn’t an instance like most dungeons are nowadays so much as an expansive crypt sort of location that lots of others could rumble around in, much like the Delves one would find in The Elder Scrolls Online. The difference here, though, is that this location was significantly larger, hearkening back to the old days where dungeons were adventures in their own right instead of a corridor from one boss fight to the next.

I spent a lot of time down here. I started finding recipes and materials. I had long since found the second spoon I needed, but my curiosity to continue to plumb the depths urged me onward. At one point I fought a boss monster alongside someone – an encounter that literally saw my screen flash red and myriad warning messages crawl across the screen at me, all of which were ignored to great success. Gear dropped. Lore unfolded. A whole lot of skills were learned. I even found a couple of impressive weapons.

At one point, the 90-degree dungeon tiles gave way to a spider-infested cavern. There was a bright light at the end of a tunnel waiting. An exit. I turned back. I had to know what else was down here. Most of the time you’re happy to see the end of a dungeon, but in Project Gorgon, I was too busy being rewarded for exploring the area and finding as much as I could, so that’s what I did. 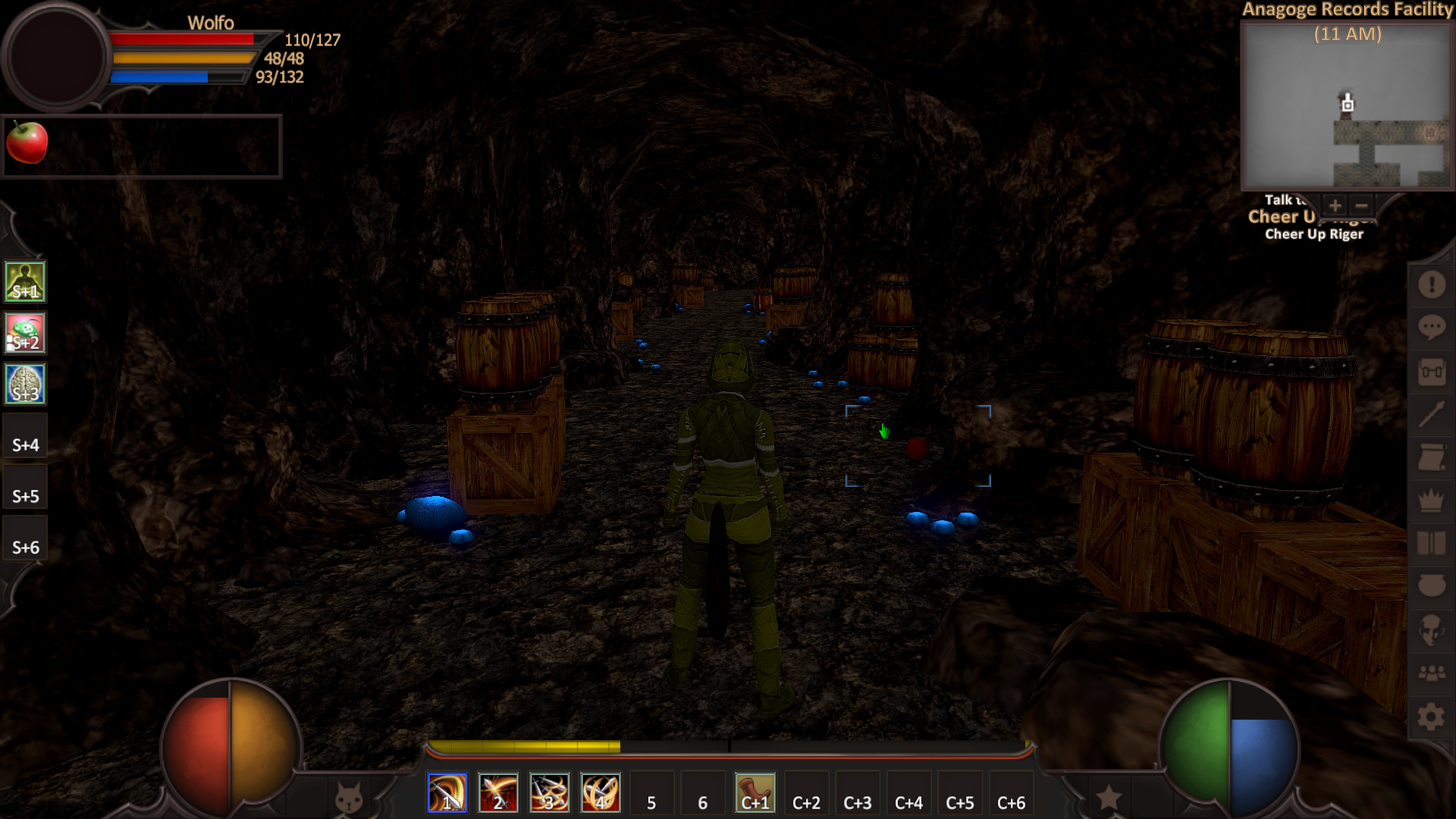 Everything about this game manages to charm, from its old-school EverQuest-like aesthetic to its wry sense of humor and wit. The skills I was learning, throwaway as they sounded (You get levels in Dying) actually have some purpose (…which grants you permanent stat bonuses). Even the ability to perform autopsies on the enemies I killed was starting to provide some benefit, inching me closer to a point where I could actually gauge enemy strengths and weaknesses before I target them.

At a certain point, my dungeon delving started to wear on a bit too long. My inventory was getting clogged up with all the stuff I was picking and plucking and looting, meaning I was starting to need to drop items. Before I left, though, I had to see what was at the other end of that light at the end of the tunnel.

I stepped forward, and the world absolutely just opened up to me. 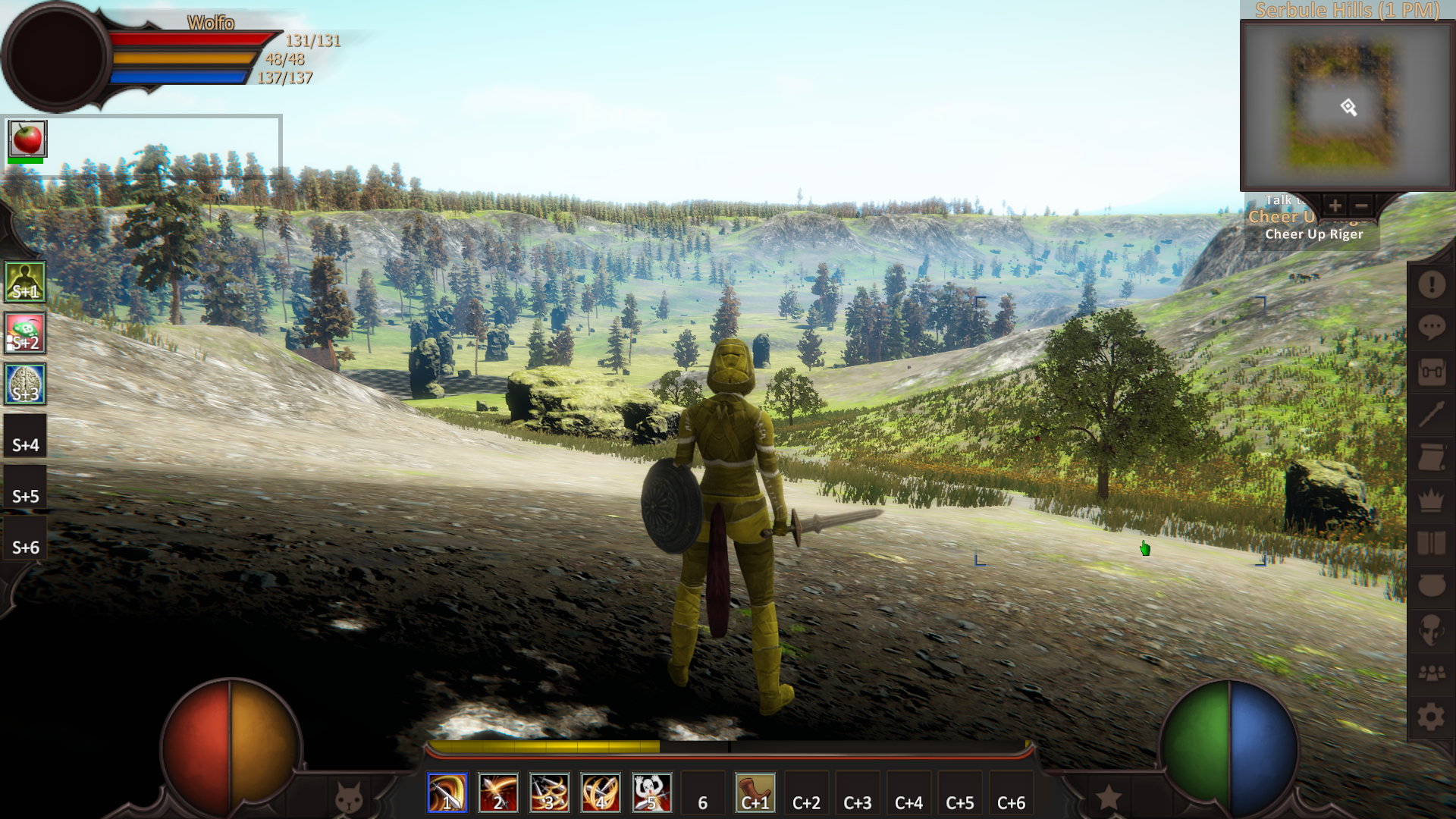 Normally, a sight like this would cause me to freeze and panic, but since Project Gorgon was actually rewarding me for wandering around and exploring, I was legitimately eager to get started. I poked at the expanse of green fields I had found a bit – long enough to find another NPC I could earn Favor with and get charged by an exploding sheep – before I got the impression that I needed to finish up business at the starter island, so I turned back around, headed back out of the dungeon, and wrapped up the couple of quests I had.

But then I had to stop. As much as it actually pained me, I had to stop. Because I suddenly realized, as I was getting all wrapped up in Project Gorgon, that I had a couple of polling options I needed to ask of you fine folks first.

The first poll is about character build. Over the course of my adventuring, I’ve found equipment that seems to be aligned to either using a sword or using my fists. I’ve also unlocked a couple of other combat skills along the way, so now I feel comfortable enough broaching the question of what type of build to follow through with in more detail.

Which build should I focus on in Project Gorgon (for realsies this time)?

The second poll question deals with which area to explore. On the one hand, Anagoge Island is small but also feels like it’s replete with other things to explore and find. On the other hand, the Serbule Hills area on the other side of the spider cave is just so vast that I really want to see what’s out there. Clearly, then, I need you to help me focus.

Which area should I focus on exploring and questing in? 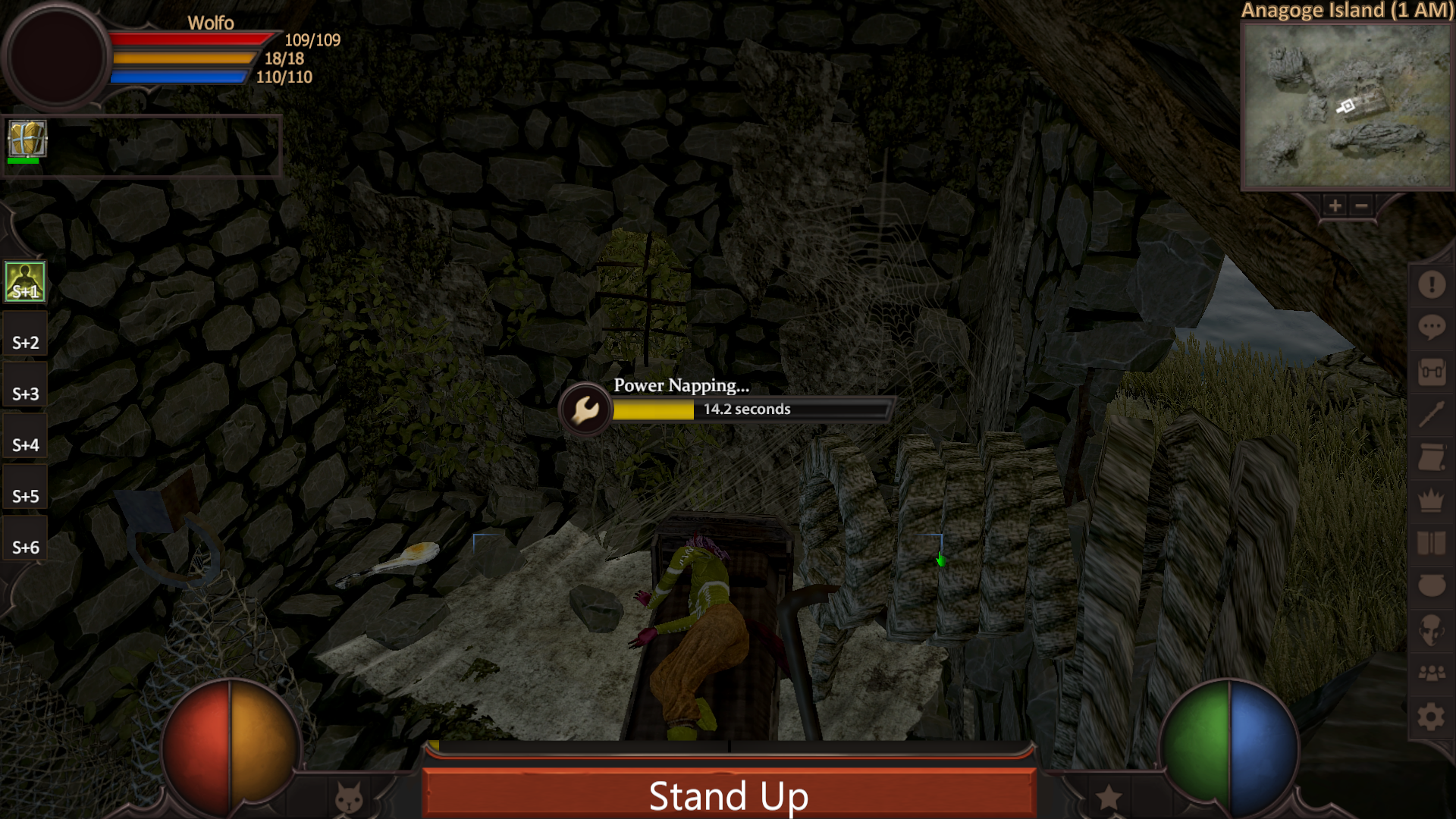 Polling will wrap up this coming Friday, December 20th, at 1:00 p.m. EST. I’m likely going to take another couple of weeks to follow through on the poll choices, but this time it’s not out of fear but because Project Gorgon is just so incredibly dense that a week doesn’t feel like enough time to really dig in. And that’s what I want to do. Don’t worry, the following week we’ll take a moment to look back on our CMA adventures this past year, so I hope you’ll join me for that retrospective.