Prior to this whole virus thing, one thing that I was enjoying about MMOs was how they (along with ideas taken from social media) were influencing other genres, particularly when that involves merging tech and real-life spaces to create immersive spaces and games. The idea of themeparks playing with this has been awesome in the literal sense, in that it’s not “cool” but awe-inspiring, both in good and bad ways.

Our speaker was Assistant Producer Anisha Deshmane. Deshmane worked on the datapad (among other things) for Disney, and while I’m sure she’s technically a very capable person, I felt like the best part of her presentation came at the end, during the Q&A. She did give out a few neat little factoids as she checked off the immersion talking points I think many of us had heard prior to the park opening.

Naturally, one of the first steps prior to actual brainstorming was having the team watch all the movies. That kind of hurts for me as someone who really preferred the old Expanded Universe, but it’s probably in the best interests of the core fanbase. While Deshmane name-dropped Star Wars Jedi: Fallen Order several times, it seemed as if it was more to show that the game pulls from the same lore as Galaxy’s Edge and makes the themepark seem more game-like. 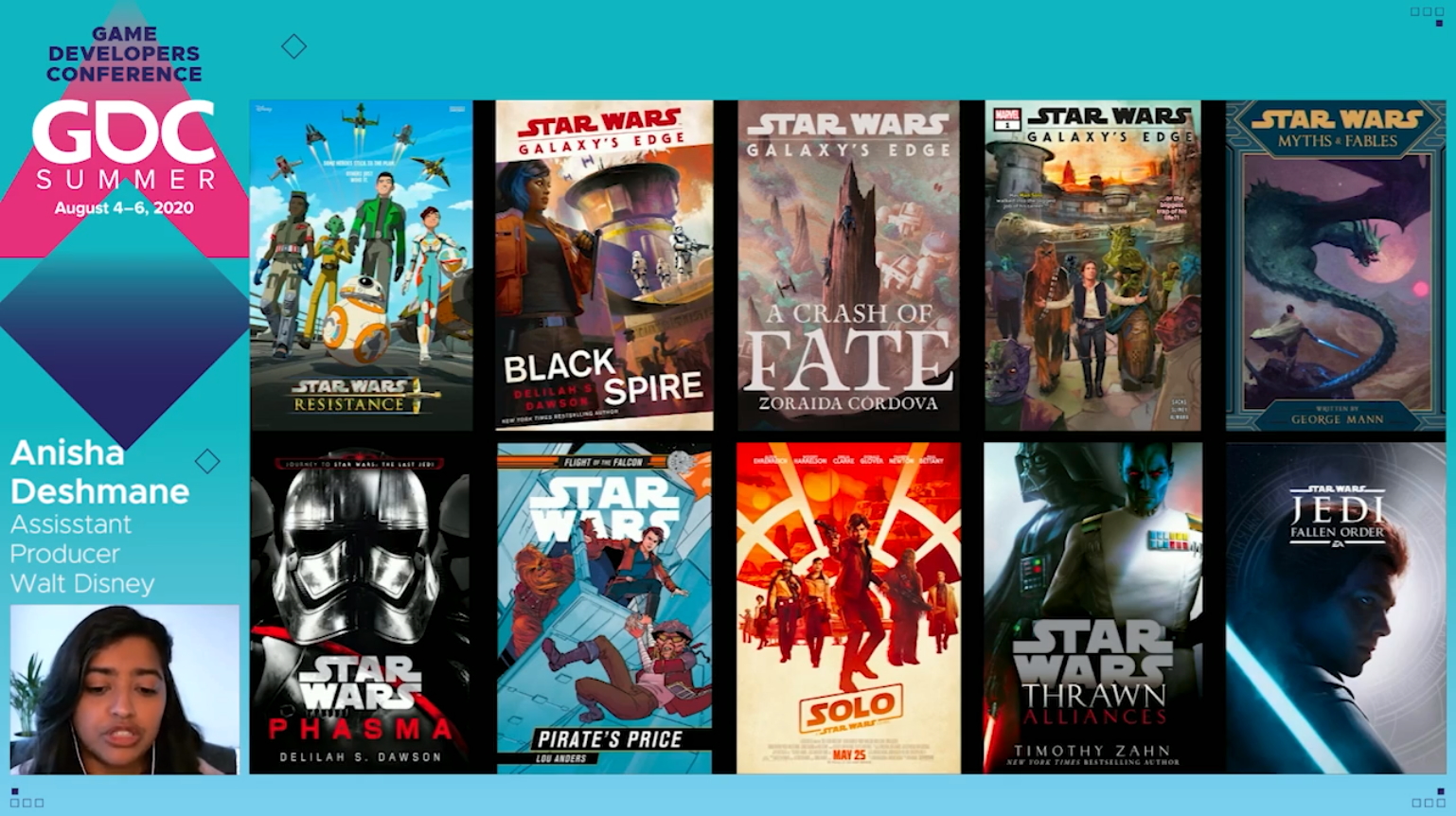 That being said, one thing Disney clearly wanted to emphasize was customization and crafting as part of its immersion strategy, and Fallen Order players can potentially recreate their in-game lightsabers at Disneyland since they both pull from the same source material, which for me, as someone who seldom chooses to play a Jedi in anything, was something I had never considered. It actually makes the lightsabers seem that much more appealing. I can still totally appreciate this, since it’s not just tying movie fans to the themepark, but fans of other Star Wars media as well.

As I’m sure you’ve heard elsewhere, the environment of Galaxy’s Edge is one of the biggest things that’s supposed to be immersive, and Deshmane tried to drive that home with examples of details, dynamic lighting, animatronics, and even telling a story just from the environment alone. I had focused my piece last year on the game aspects of Galaxy’s Edge rather than the area as a whole since we focus more on games, but Disney’s attention to detail made a bit of an impression on me, mostly when I could escape other park visitors. Between the crowds, rush to get into lines that keep growing (or in my case, do as much as I could before the time limit was up and I was actually forced out by Imperial Sormtroopers), it can be hard to appreciate the scenery in just one trip, which I’m sure Disney loves.

The cast members (park employees) have their own background stories, which as I’d heard from cast members I’ve met outside the park can largely be their own creation, within reason. Sadly, though, you will see Ray and Darth Vader around the park at the same time, which will quickly break your immersion. Few of my fellow visitors wanted to dress the part, try the lingo, or actually use the datapad, which also doesn’t help immersion. And before someone else chimes in, no, Disney doesn’t necessarily cater to Uncle Owens on the datapad missions let alone the rides, so that could break immersion unless someone is brave enough to go hardcore roleplayer on park-goers and employees.

And I wasn’t alone in feeling like other park-goers weren’t exactly with me in a galaxy far, far away. A few other people at the GDC panel who had previously gone to the park noted that they felt the datapad play on their phone was ignored, or that people in their party rushed them, or lines moved too fast for them to make proper use of it.

But as usual, each person’s experience may vary. Despite our feelings that the datapad felt under-utilized, Deshmane said, “On the contrary, we’re really excited to see that our guests who use the Datapad are reporting having a deeper, more immersive experience in the land because it points out parts of the land they wouldn’t know about otherwise, and it gives them a way to explore their own way. The experiences in the Datapad are designed specifically to get guests to look around them, find touchpoints, and then pull out the device to explore more.”

And that’s not incorrect. Other fans may not have been participating, but as I literally said in my original article, “The game was a good distraction and helped me learn the lay of the land a bit.” For people using it, the cellphone does become an interesting immersion tool, to a degree.

But a lot of the “activation” of droids and other mechanisms that Disney has touted? I knew things were being activated around me, but because other people had done it recently, they didn’t activate when I was doing my thing, which broke my immersion or even made it possible for me to miss it. There’s clearly a sweet spot guests need to hit in terms of immersion. Just enough people of a similar mindset helps, as would be the timing of doing activities.

That’s going to be hard for anyone to achieve, even Disney. Worst yet, Deshmane admitted that “Playtesting is hard especially when there isn’t an environment to playtest in.”

“The experience is so different when you’re playtesting in a controlled space without ships flying by,” she said. “So there’s a lot of initial testing as well as continued testing once the land is developed and launched.”

This is even more obvious in hindsight, as Deshmane claimed your experience is supposed to carry over between visits and devices. (Neither has carried over for me.) 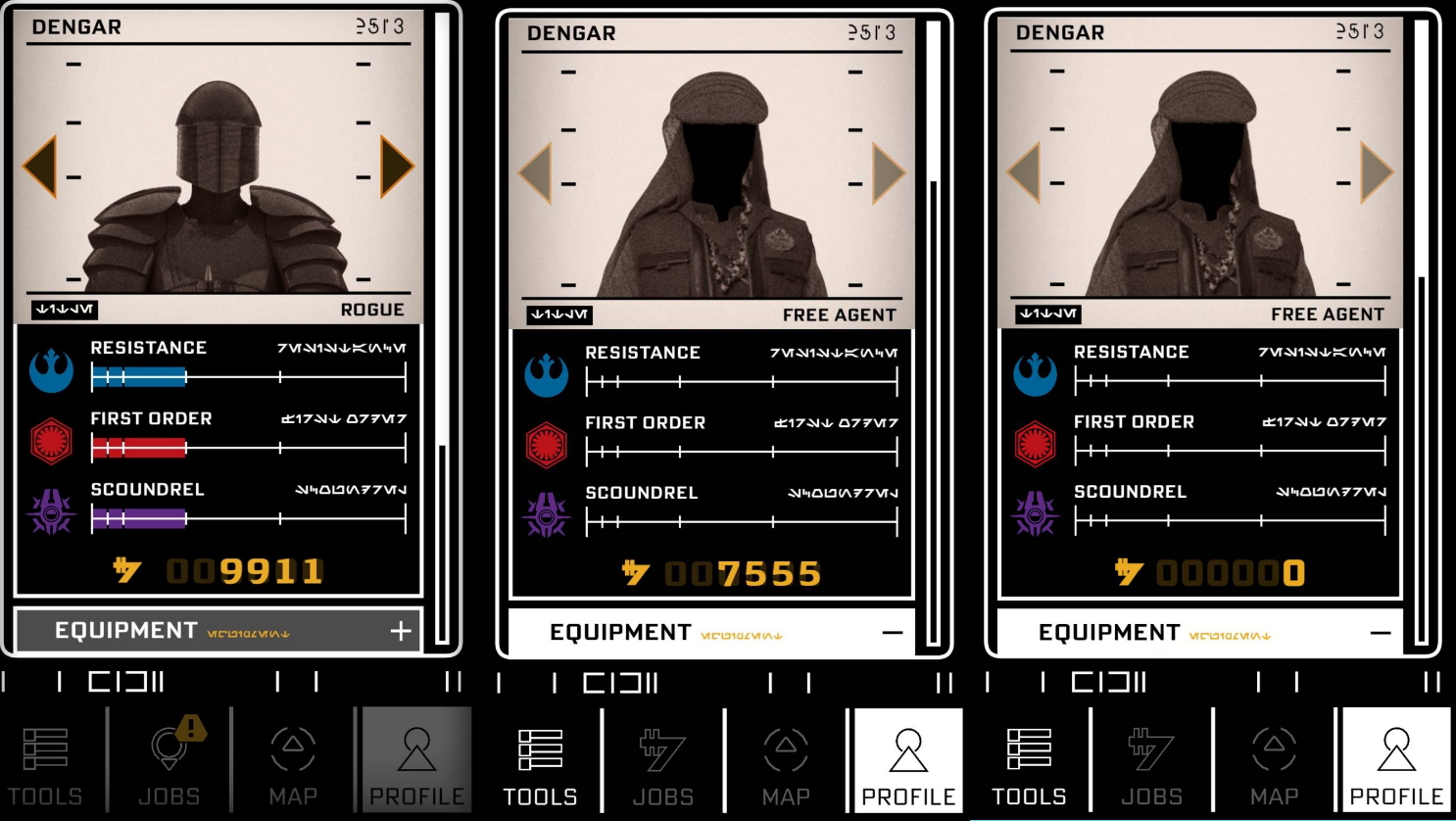 Here’s a couple shots from my game over time. On the far left is my progress as I had shown it when I visited the park June 5th, 2019 when using a spare iPhone for my article. I had noticed after doing the article that my progress hadn’t carried over to my Android, and while I’d tried contacting Disney support about the situation, it just ended with the idea (nothing was confirmed) that the iOS and Android saves should cross over but may have been different enough to cause technical issues.

My current profile on the iPhone is the middle picture: I’ve clearly lost all progress — reputation, items, credits, and titles– but was given credit for one of my Smuggler’s Run adventures. Upon immediately logging into my account on my Android (far right profile), I was back to 0, including the credits awarded when I opened my profile on the iPhone. Disney suggested that I was not logged in the day of my adventure, but my unlocked achievements on both platforms had recorded my visit to the park that day on my profile, just not all my Star Wars-related ones.

This is most likely a bug or some oversight, but as an early adopter who was looking forward to eventually checking out the second ride that opened in January this year, I’ll note that losing all my progress is disheartening and immersion-breaking. I’ll edit this if Disney’s support follows up, but at the moment, it may be best to keep expectations of a continued Blackspire persona virtually carried over between visits to a minimum.

Now, one thing to note about my previous progress. You’ll see that my reputations are all the same. That was no easy feat. As I said before, being a scoundrel felt almost like a secret option, and during the baseholding portion of the hacking game, I felt more limited on my activities as a scoundrel than if I had wanted to play more as an Imperial or Rebel, and this is usually my feeling in Star War media. Disney did a better job than most, but I had to ask if it was homing in on that balancing act. Deshmane said, “The balance of the experience was something that was certainly hard, especially with credits involved! We’re always looking for ways to make for a better guest experience; stay tuned!” – which I hope means I can be more scoundrelly at some point. 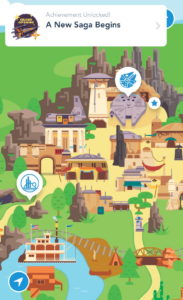 Not a lot was said about the game-specific parts of the datapad experience, and nothing was really said about Smuggler’s Run, the two-to-four-player ride/Falcon simulator. I was happy to hear that I was right about the translation minigame being travel inspired and that hacking is supposed to relate lore, but the talk of spending your in-game credits barely registered because aside from profile equipment, the items didn’t really strike me as anything more than purchasable achievements. They were cool to have, and it was neat to hear that if you lose enough money when doing poorly in Smuggler’s Run that it may make cast members treat you differently, but remember that I had zero reaction from cast members during my entire visit (not including instructions for entering the area or getting on the ride, which were largely generic), and I was actively participating in the virtual game as well as having done Smuggler’s Run twice.

For visitors with kids, Deshmane had this to say:

“[Disney has] found that kids do really well with the Datapad [cell phone play]; they’re able to navigate and [Disney is] seeing a lot of inter-generational play as well (parents and kids playing together). The tool interactions were designed specifically for young kids to pick up and play, without a lot of instruction – so they can discover how to use them by playing around with them.”

This is probably why I felt gameplay was fairly simple, though it’s also perhaps how the company made learning the galaxy’s alphabet, aurebesh, something park-goers were engaging (which makes me a bit jealous as someone with a degree in language teaching!).

I was hoping to hear something profound about what Disney was trying to do with Galaxy’s Edge, even though my personal experience at the park was lukewarm at best. Maybe the panel works better for people who haven’t visited the park yet or didn’t read anything about what to expect, but I assume there will be more details on the future, making the area seem more like a roleplaying game than a set connected with some rather simple games that may occasionally trigger a real-world setpiece. No doubt, I still want to return after the pandemic we’re experiencing.

But Disney really is in a new territory. While its ability to create a good set is hard to match and creative crew members can help deepen the immersion, at the end of the day, just as in so many online games, your experience comes at the mercy of your fellow players, and it will take some serious design changes (both to the physical and virtual spaces) to create something that can appease a very wide range of fans.