Palia’s reveal last month had the MMO and MMO-adjacent communities abuzz with delight over the cutesy simulation MMO, including ours. In our article on the upcoming game, we noted that Singularity 6 was well-funded, with $19M total in seed funding and Series A funding from investors, which helped assuage the typical “new MMO” concerns about crowdfunding or money-grubbing.

Well, stack another $30M on top of that initial haul: Singularity 6 announced today that it’s raised a ton more money to develop Palia.

“Singularity 6, the Los Angeles-based developer dedicated to the idea of delivering more meaningful online game experiences, has raised $30 million in a Series B financing round led by FunPlus Ventures. The funding also included previous investors Andreessen Horowitz (a16z) and LVP, as well as Transcend, Anthos Capital and game industry veteran Mitch Lasky. The investment will fuel the development and launch of the recently revealed massively multiplayer community sim game, Palia, and help Singularity 6 deliver a beautiful and fun online game experience designed to create community, friendships and a real sense of belonging.”

In other Palia news, S6 sent out a round of pre-alpha invites yesterday. Unfortunately, if you merely signed up for pre-alpha on the website in June as the studio originally urged everyone to do, that wasn’t enough; there was a second signup announced only in Discord earlier this week too, and now it looks as if it only a tiny number (200) of those Discord applicants were picked (at least partially based on “constructive contribution” in Discord) and notified through Discord to join the test, conveniently just in time for this investment announcement.

The devs say they were deluged by more sign-ups than they originally expected and needed a way to whittle it down for the earliest phases, though it’s not clear why they didn’t just choose 200 people from the “hundreds of thousands” of people who signed up last month. Either way, as you can see, the messages from the studio have been weirdly contradictory. We assume that the original sign-ups will be honored at some point as the pre-alpha expands, but it’s been a bit of a mess so far. 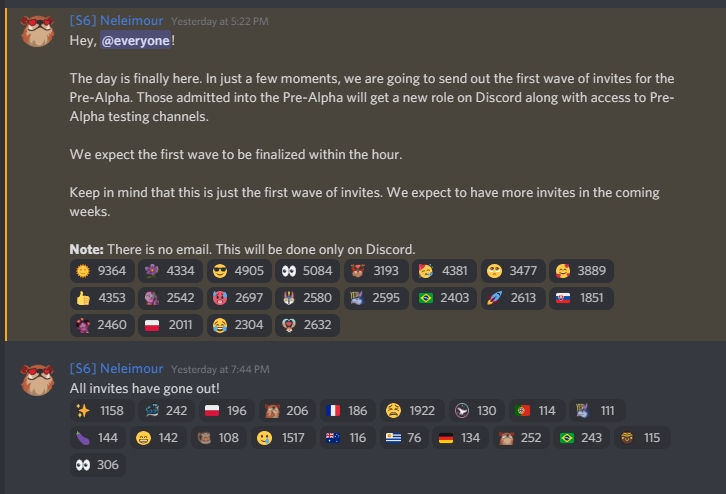 Source: Press release. The piece was edited after publication to add clarity to the chain of events regarding the pre-alpha invites.
Advertisement

WoW Factor: Is Dragonflight the last chance for World of Warcraft?

ArcheAge War gets an age rating for 18+ players in South...

October 7, 2022
You are going to send email to
MOVE COMMENT