When I first started playing Path of Exile, I never envisioned that housing would become available. And not just housing, but good housing with plenty of room for creativity! No, that fell under the purview of MMOs and sandbox games.

But Grinding Gear Games sure pulled one over on me: The hideout system is pretty great.

END_OF_DOCUMENT_TOKEN_TO_BE_REPLACED
Originally, I ignored hideouts. Introduced in August 2014 with the Forsaken Masters, this limited type of housing was league-specific. Once the league was over, your hideout would be wiped clean. All that decorating, reset. No thanks! Obviously, this was not a situation I wanted to be in. (At least the reputation points didn’t wipe; the highest amount that you’d earned for each master transferred to standard and you could repurchase all the decorations.)

However, once big revamp to hideouts hit in December 2018’s Betrayal added permanency, I knew I had to finally try them out. Now that I have, I may need intervention to stop! Color me super impressed because it’s better than I had imagined. In fact, I wish other games would adopt a few features from here.

Some folks might not quite get why a game of Path of Exile’s style would even venture to install housing. Producer Chris Wilson actually answered that question back in an interview with MOP in 2015. Here’s what he said:

The desire to add hideouts stemmed from the social nature of Path of Exile. As an online game, players needed a place to call their own, and we found a great opportunity that tied into the theme of our expansion (having masters that show you the location of a hideout themed around them).

Systems like this are important for communities because in addition to giving the community members a creative space to hang out, they also let players showcase their work. We run a “Hideout of the Week” video series where the most interesting hideouts are highlighted to the community.

Acknowledging that players who gravitate to the playstyle of POE can have quite the creative side is just another reason for me to appreciate GGG. This is a studio that builds its variety of leagues with the idea of catering to many types of players. Player-generated content and expression of creativity is just another type of play, and Path of Exile shows that you can add it successfully to an unexpected place.

It’s also good business. Wilson has previously stated that hideout creation used assets already in game. You can’t discount the fact that housing is a great idea to introduce new players to the game who might not have otherwise, either. Many players get in on it, and housing showcases are still a thing. Just after the housing revamp launched, there was a decorating contest, and the winning entries are quite spectacular.

The hideouts aren’t just for creativity or showing off, however. They also contain crafting tables that you can use to add enhancements to your gear.

Some games make housing difficult to obtain or prohibitively expensive time- or money-wise. Not so with POE. Like the game itself, housing is free. Getting it is also simple: Everyone has at least one hideout just by claiming it after rescuing Helena in Act 2. You also get more hideouts as you continue to play through the Acts as well as from endgame maps. When you find one (they show up as a special symbol on your map), just zone in and clear it out, then talk to Helena who wanders in, and wham — you have another hideout.

We’re not talking just an empty room, either. Each hideout already comes equipped with numerous decorations! That shocked me; I expected to have to grind up reputation to buy items or purchase them in the cash shop. I mean, I knew that was an aspect previously. You still can get more decorations from the masters with reputation, but you already have plenty to start with. In other words, you don’t have to grind, grind, grind or wait until you are high-level to fully enjoy this feature. That’s a huge plus. Additionally, the hideouts and decorations are all account-wide now. Once you unlock hideouts, you use them at any time in any league — even a brand-new one. You will have to reconnect with each master before you can place them in your hideout, though.

Another awesome aspect of the revamp is the improved UI for the hideout system. With it, you can reclaim all hideout decorations with just a simple click of a button — with the exception of the stashes, the crafting bench, and the waypoint. The UI is a master list (with pictures) of every item you have access to in all your hideouts, allowing you to pick and chose what you want to place without having to dig through bank vaults, storage chests, or inventories as in so many other games. Even better, you can remove any item from another hideout and add it to where you are now with a simple click. Holy housing, all games need to have this! I can’t even imaging how much better and efficient my decorating would be if this were a feature in EverQuest II, RIFT, Lord of the Rings Online, or any other game with housing. It would be a decorating game-changer!

Although you can use only one hideout at a time (use the icon on your map from any waypoint or use /hideout from anywhere), you can also very easily swap between fully decorated hideouts, allowing you to hop into whichever one fits your mood or just work on decorating multiple ones simultaneously. It is easy to save and even share your layout with others so they can use it. Who would have ever thought you could market interior decorating skills in Path of Exile?

How many hideouts can you get? There are quite a few different tilesets. The Path of Exile Wiki lists them all out along with where to find them.

So how do you decorate? Again, I was very pleasantly surprised by the depth of the housing feature. Not only does each hideout come with a plethora of placed items that you can move around at will, but you also can transfer the placed items between hideouts! That means the freaky animal bones displays and piles of books from your Enlightened hideout can be moved to the beaches of your Coral hideout. Why not books on a beach? As soon as I realized this, my mind went wild trying to think of all the crazy possibilities. Then I started to learn all the different items you can acquire (PoEDB has a great listing, including images, which master sells it, and how much reputation you need) and my mind almost melted down. 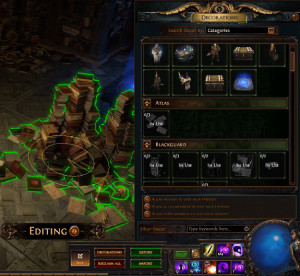 I started moving things all around trying to get used to the placement controls, which are different than anything I have used before, and made another startling discovery. Many items have alternate forms! It’s like getting six items for one. Rock formations, palisades, coral, branches, tents, trees, bushes, chairs, paintings, piles of corpses — so much of what it in the hideout is not only moveable but can transform into other versions of itself! For instance, there is a really nice candelabrum in my Enlightened hideout. It didn’t register that being labeled Candelabrum 1 would mean anything, but when I accidentally scrolled the mouse wheel, it swapped between the other versions 2-5. (You can also do this using the Page up and Page Down keys.) Say what?! Each version was different, so I could have it lit, unlit, broken, twisted, or made of different materials. I have never seen that level of customization with housing items before, and it blew me away.  See what I mean by a deeper housing system than expected? This is another feature I wish other games would emulate.

The actual adjustment of items is the one thing that takes some getting used to in order to get it just right. Once you enter edit mode, you can place or move by holding down the left mouse button and dragging. You can also use the arrow keys. What took a little bit of skill to manipulate was rotating the item: You use your mouse to pick the angle you want it to move within the two circles. It was only later I discovered you could also use Shift+R to rotate it incrementally!You can also rotate something 90 degrees by using Ctrl+R. Another decorating tip is flipping an object by pressing F. If you decide you don’t want an item placed anymore, just click on it and hit delete to reclaim it.

Whether you have fully decorated your hideout or not, feel free to invite party members, guildmates, or friends over to check it out. And if you have a place you want to show off, please let me know! I’d love to take a look and maybe show it off live on a stream or in a future column. Or you can show off some screenshots here!

If you don’t hear from me for a while, I might be hiding away deep in my hideouts. Happy decorating!