True story, when this news blip crossed into our writers room, I giggled because I’d already bought some from the collection. Look, it’s nail polish and video games. Of course I bought some of it.

The collection I’m talking about here is a 12-bottle collaboration between Xbox and OPI, which is one of the biggest mainstream nail polish brands in the west. The press release says it’s live in ULTA stores in the US as of yesterday and launches globally in February, but it was actually live on the ULTA website back in December, which is how I got my hands on a few bottles – and how the beauty community was already roasting the collab a whole week before Christmas. Why did they roast it? Because the colors are boring spring pastels and don’t match the bright neons associated with Xbox. Look, maybe the companies thought otherwise, but there are kind of a lot of nail polishing-wearing gamers, and they are discerning. 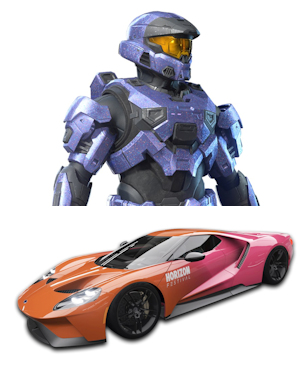 What I didn’t know before this week is that there’s a second gaming-related component to the collab, relevant to our readers because it involves Halo Infinite specifically.

“With every qualifying purchase, U.S. fans can unlock hue-matched, in-game content for Forza Horizon 5 and Halo Infinite starting February 1,” the companies say – it turns out to be a pink/orange car skin in FH5 and a glittery purple armor skin for HI.

Incidentally, I was disappointed in the two colors I bought, Sage Simulation and Quest for Quartz; both are significantly duller than the promotional photos, and neither is the color described by OPI (Sage Simulation is most definitely not a “shimmery sage green simulation” – it’s not even green). I’m typically an OPI fan (because of the quality, not always the shade selection), but I cannot recommend these. Even so, I’d sure love to see them try again.

The Cycle Frontier hypes its first flying monster, coming in season 3 on March 29

Mad World is done but slips to 2023 anyway, without Netmarble publishing