We’re only about two and half weeks removed from the launch of 3v3 arenas in New World. This was a feature I was extremely hyped for as New World has been my nightly go-to for the past month or so. I haven’t had the sort of success in finding activities to keep me occupied as I leveled as I had hoped, but arenas really should be the key to giving me that action.

Despite my best intentions, though, I wasn’t able to log in and play when the arenas released. It’s not my fault schools let out that same week and everything got busy as all get out. So, I was pretty tied up until this past week. Finally, I was going to get my hands on the arena update.

Or so I thought. Honestly, leading up to the release, I had all kinds of plans for this column. I was ready to take some of the finer points of the arena to task. Possibly discuss the balancing issues. Maybe I could even talk about where the meta was headed. Alas, ideas never go as planned. The fact is, after a week of playing and trying to get into a match (at prime time US too), I haven’t had a single queue pop for me.

So, another week of New World gaming without any meaningful PvP and the continued slog through PvE leveling quests. Well, I guess we’ll be discussing what seems to have gone wrong with New World… again. 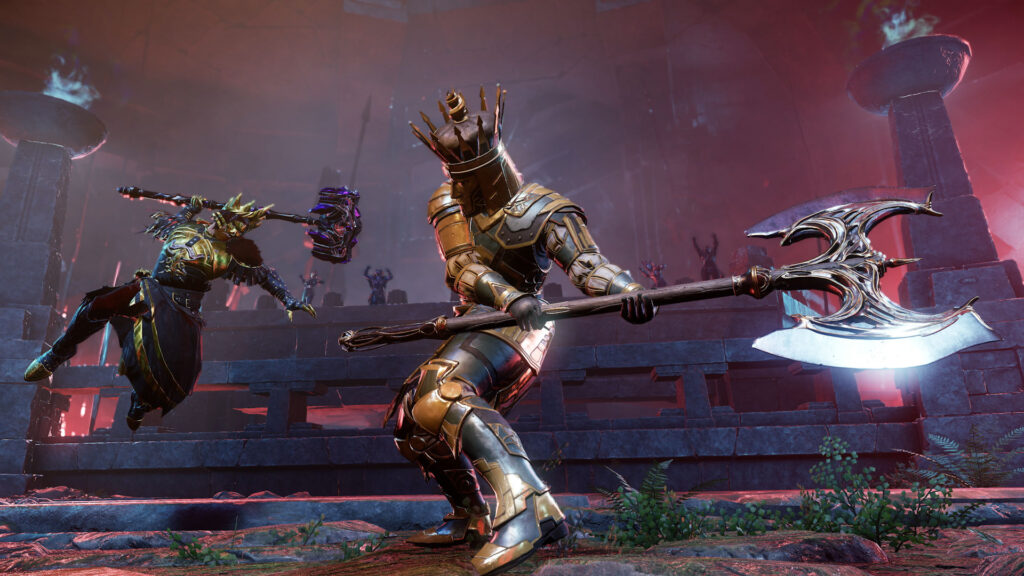 I know I gave a real quick overview of the arenas in my last column, so I won’t retread that road. This time let’s talk about the actual details. The actual, deep down, hammer on nail, boots on the ground, rolling in the weeds deets. If we do that, maybe we’ll be able to suss out what could possibly have gone wrong.

While the arenas are 3v3 “best of five” format, there are many aspects the developers at Amazon Games took into consideration. They didn’t simply throw this format out into the world without thinking about how the balance and team compositions would play. As we reported originally, Amazon realized that with small teams and without any default heal skills – a la Guild Wars 2 – the Life Staff became a requirement to winning a match. A team with a healer would have a huge advantage over one without, to the point that players would be queuing up not with just their preferred playstyle in mind but with a specific meta in mind. To address this, Amazon implemented a healing debuff, as well as provided players with some consumables that would appear for a match and be removed afterwards.

The arenas were also designed with a size that didn’t over emphasize ranged combat. Originally the size was the arena was twice as big, which gave a huge advantage to ranged play. So, the team reduced the size and added pillars that players could use to break line of sight. On top of that, a shrinking arena (similar to what you get in a battle royale) was implemented to prevent matches from running too long. All good stuff. Now admittedly, I don’t know whether these balance decisions played out at all, but I do appreciate the thought that was put into this design.

In addition, the arenas were developed specifically as a means to address the gap in PvP accessibility. Players would be able to queue up once they’ve reached level 20 and would be paired with others around their level. Scaling was reintroduced to normalize the damage players would receive. You also didn’t need to be at any specific place to queue up, either.

Here’s an excerpt from the studio’s pitch that specifically marks this mode as a level 20+ training ground for level 50 and 60 endgame PvP, with an eye toward removing barriers to entry.

“The 3v3 mode unlocks at level 20 and pairs you with players around the same level. This makes the Arena a perfect training ground for other PvP modes like Outpost Rush (level 60) and War (level 50) that have far higher level requirements. Confident Adventurers can strut into battle with higher level friends for a challenge against more experienced combatants. New World features scaling, which means your damage will increase and you’ll take less damage, but large level differences still translate into big differences in damage. Be prepared for a tough fight. […] Players are given the same consumables based on their level upon entering the Arena. Use as many as you need to survive. Any unused items will leave your inventory when you exit the match.”

All of these are features I’d have on my checklist of requirements for a solid arena mode. As I’ve stated several times since release, there hasn’t been a reliable way for players below the level cap to PvP despite combat and PvP being one of the best features of New World. Arenas were meant to allow players who weren’t at the level cap the ability to queue up and compete with other players while also earning XP. To me, this really is an excellent idea. Of course, I’d prefer it if all the instanced PvP modes were unrestricted and players below the cap could participate, but that’s not the point here. The point here is that we actually had the development team realize there was a need for players to PvP, and these devs looked to address it with the arenas.

So, what the hell happened? Every night I queued up and waited for around 40 minutes for a match to hit, yet I never got one. I’m solidly in the mid-game at level 41 or so. How is it that I can play for a full evening without ever matching up with five other players for an arena? We know the game’s population has taken a hit since launch. But that’s normal for MMOs; what game doesn’t drop its population after launch? Is it really so bad that we can’t find five other players to play a match?

I just can’t believe there aren’t enough people to get even a semi-respectable set of matches together. However, I can believe that we can’t find enough people in my level range to build a match. I suspect that it’s just that only maxed-level players are choosing to queue up.

Even then, it’s not clear endgamers are gravitating to the most. Amazon clearly put a lot of thought and effort into arenas, but it’s languishing already, and evidently the team is aware of this as well as we’ve already seen experience buffed not once but twice since the mode launched. Maybe it’s helping at endgame, but it’s not helping anyone else.

If New World is going to save this game mode, we need some serious adjustments – if not to the design then to on-boarding players. I can think of two options right now. First, the studio could further pump up the experience and rewards for participating in the arenas. And I do mean pumping them up. You need to jack it up to the point that players that want to level or want these rewards cannot ignore the mode without at least acknowledging that they’re going to opt to level more slowly through PvE questing.

Second, the studio could completely normalize player levels in arenas so that even a level 20 will match up with a 60. Just fully flatten damage and even give players maxed weapon skills to get as many players from all levels in as possible. It might require designing a build page so players have a separate PvP build from their main build, but honestly that’s the better long-term solution anyways. It allows players to trial and test different builds much more, and we’ll enjoy the mode more for it.

Without those big moves, I worry that arenas are simply going to become another failed feature in a game that deserves better. For me personally, I think I’m going to hang up my New World boots and go back on the search for something else to play. Not having any accessible PvP and slogging through PvE leveling as slow as waiting on my car at the shop (which assured me it would be done in two hours, but here we are five hours later and you’re just now pulling it into the garage) just means I have to move on.

Maybe if Amazon gets these arenas and leveling sorted out so I can actually PvP without more grinding PvE, I’ll come back. But for now, I need to try something new. There are faces that I need to smash, and I can’t do that here.