For those who haven’t been keeping score, I have. Niantic has now missed two Pokemon Go dev diary months: one in August, which was the first year anniversary of the #HearUsNiantic/#PokemonNO movement that showed Niantic needed to really learn to communicate with its playerbase, and one in October, which was the first year of these bi-monthly “dev diaries.” Granted, being months late isn’t exactly a recent problem, and as I’ve mentioned before, Niantic never really seemed to understand what a traditional dev diary was, so it’s not surprising that those we’ve gotten have been inadequate.

In its original promise, Niantic told players the goal of the dev diaries was “to share the latest priorities, events, and features for the game.” But almost none of the entries has done that, especially not in a way that came across as anything beyond advertising. We’ve now seen a steady flow of the company’s overt marketing (and marketing experimentation), failures to meaningfully communicate with the playerbase, dodging press, bypassing content creators, and just overall not feeling trustworthy.

And it’s affected our own willingness to report on the company: Several months ago, we had to decline a Niantic interview about a non-Pokemon Go game because the studio wouldn’t identify who at the company was making bold statements on its behalf. The lack of trust made us leery of getting anything beyond marketing speech.

This week’s blog entry demonstrates our suspicion was right. 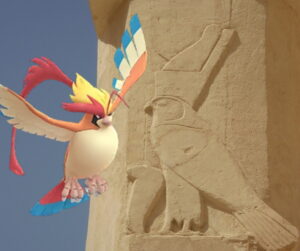 I want to be upfront that I have no issues with Yusuke Kozaki, the artist for not only several Pokemon GO original characters but for some pokemon, some Overwatch skins, and Fire Emblem, and more. I appreciate his work and am a fan of several of the IPs he’s worked on. Outside of recent fashion week changes, I really enjoyed his designs for the POGO gym leaders. I got mad hooked on Fire Emblem Heroes not only for the gameplay accessibility but for great art. And a friend and I spent a lot of time trying to get just the right Toxtricity form, not because it was very good or useful to us, but just based on its appearance. I don’t follow him on Twitter or anything, but I do appreciate his work.

What I don’t appreciate, though, is feeling like Niantic threw him at us as a smokescreen to hide its own failings. After two months of missing dev diaries, both of which should’ve marked major milestones, we needed some meat. The entry on Kozaki-san doesn’t have anything to do with current priorities (I would hope), events, or features for the game. There are so many fires to put out that Niantic’s clowning has been taking over updates in our own monthly guides, including the first two days of November. I don’t expect accountability from Niantic, or even most game companies, but I did expect company ownership of recent fiascos, which continued into this month.

Niantic needed to address at least its communications issue. Heck, it could have just talked about the changes since last year and given that a positive spin. I’d still criticize it for the spin, no doubt, but the refusal to even acknowledge it as a point of discussion seems cruelly intentional. For another example: The constant bugs would be hard to discuss, but a basic summary of the pipeline of how something goes from being an idea to an in-game feature at least would have helped players get a vague idea of what’s going on and maybe where things are getting screwed up.

By totally ignoring ongoing issues with communication, bugs, and disorganization, Niantic makes this new “dev diary” serve as only another PR ploy. Niantic ignores not only the current issues but also its own promise made less than a year ago, rolling a puff piece out to continue that trend.

It’s insulting on multiple levels: Kozaki-san didn’t deserve to be used like this, and the playerbase deserves better. Both community leaders and content creators seem frustrated, not only with the state of the game but with Niantic’s underwhelming attempt to make good on its promise with this blog entry.

I know someone out there might think, “Well, you’re a dedicated fan. You pay more attention than most players.” And you’re not wrong! However, casuals don’t read developer diaries; those missives weren’t really for them. The folks who do read them are the ones who consume company news and pick through it, and those kinds of communities are not happy with this blog entry either. Niantic probably knows this, since as of this writing, there’s no mention of it either in-game or on its Twitter feed. Much as it did with the Pikmin Bloom Privacy Zone update, Niantic seems to post for those of us who watch but doesn’t want to call too much attention to it out of fear of repercussions from the wider playerbase that is otherwise oblivious.

I say this a lot lately, but I want to say it ago: I don’t hate this game. There is a lot I enjoy here, and I truly can’t think of a game that would 100% replace POGO if I were to drop it today (even though my average Ring Fit Adventure workout is far more useful in terms of exercise). But I have to divorce the product from its makers in order to enjoy it, though sometimes I will forego the product when the maker is being particularly problematic.

I’ve been wanting to put out a Why I Play column on Pokemon GO for some time now to help clear the air, but the mixture of Niantic’s ineptitude and seemingly intentional disrespect of the community has put that on hold for the foreseeable future. I say that not to be cruel but because I honestly cannot imagine a company being as tone-deaf and inept as Niantic has been for the past month. I’ve worked with indies that might have been slower but were still more attuned to their community’s wants and needs. Remember, it’s been over a year now since POGO players rebelled, and there have been several features that pitted players against devs now, plus two major events. But nothing has changed at all.

So it’s incredibly hard to be positive about the game when Niantic gives the appearance of having a whopping one employee looking out for the players in their private time and far too many overpaid higher-ups making bad calls. Even a staffer argued something similar, in spite of approval for the CEO: that Niantic is far too thin-skinned as a company and focuses too much on trying to be positive instead of tackling problems.

A company cannot improve itself by burying its head in the sand. It’s just a shame that the company that did so well initially in tackling COVID is also the one that’s gone downhill the most in our post-vaccine world. Not only Pokemon Go but Niantic, as a company, could be so much better, and it’s incredibly disheartening to see the leader of the ARG genre decaying so rapidly.