Pokemon GO finally gave us a good pokemon to catch for Community Day, and I’m happy about that. Really. Had this been 2019, it could have been one of the best CDs Niantic released. I mean, tons of bonuses and an optional after party? Sounds pretty cool!

Unfortunately, the problem is that it’s not 2019. Players already know things could be much, much better. The deluge of bonuses masks a company that doesn’t know where the mark is, much less the ability to hit it despite players constantly pointing to it. Yes, it’s fun to catch and evolve a traditionally rare pokemon that’s been superpowered thanks to its new move, but that doesn’t mean it brings the community together – it’s just alone together.

Again, I want to reiterate that Deino Day was not a failure. I hadn’t seen a turnout this big for a simple Community Day in a long time. However, I also saw more people than usual unable to make it or unable to play for long due to work, weather, and health issues (COVID numbers are up in my part of the world, though luckily my group’s been safe).

As usual, I’ve pulled some numbers from one local community to help peg down some numbers, but as always, keep in mind that these are just the recorded data of one of the groups I’m associated with. 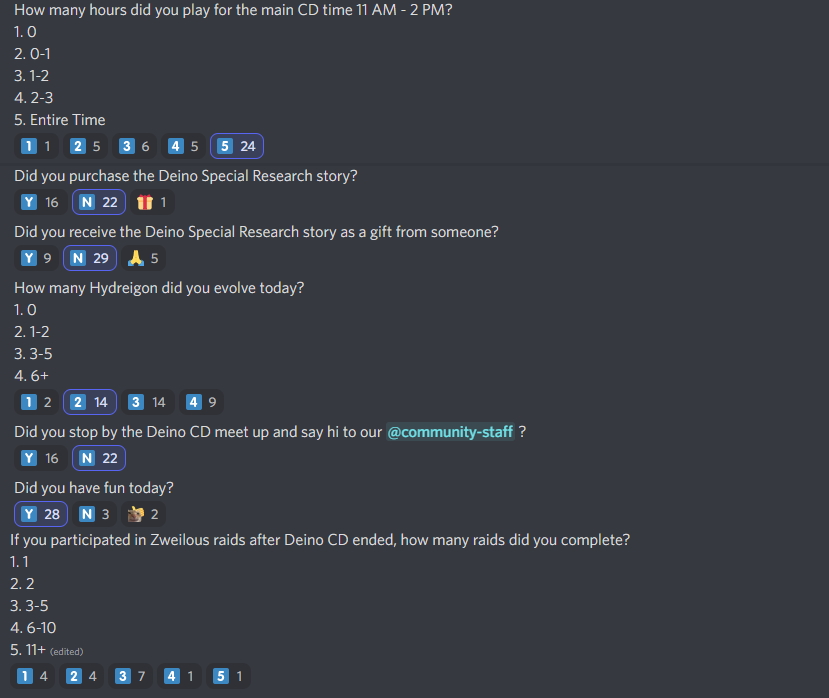 So, we can see that at least 41 people in the group were active that day. Most people seemed to enjoy the event too. But look particularly at the last question about the raids: 17 out of 41 people participated in raids, or about 41%. This isn’t too surprising to me because this community is particularly well-known for raiding. It’s how I found them and how I often engage with them in-person. In fact, I know people from other local groups who also go to that part of town to find raids. I don’t want to call them whales, but the community there includes many well-to-do people who can afford to spend cash on the game, and as you can see, even gift it to others.

In fact, I was playing in a different part of town, and I sadly killed people’s urge to do Zweilous raids when I mentioned this lack of additional passes. Where I was, once the event ended, most people went home, despite there being both a Zweilous and Mewtwo raid, the latter of which had spawned at the start of Community Day, which may have prevented some people from participating.

Some people must have done Zwei privately, as one friend kept watching to see if anyone would use a pass on it, but we had chosen to do a Mewtwo raid instead, especially as that pokemon is vastly more rare and valuable, plus has higher prestige. Other people joined us, but as usual, there was no real communication needed or even offered, despite my waving to some of them. We did benefit from the Zweilous raiders for some free spawns whenever they had gotten it done, but my little group was too hungry to stick around long.

Later, I went to the high-raid part of town where the data above come from. While there were Deino spawns thanks to raiders, there weren’t a ton. It didn’t look like a community day at all to me, just that maybe Deino was more common. Think pidgey, rattata, or zubat when the game was new.

Except these came from a raid some people had done on their own. Remember, Niantic allows players to see PvP action in the overworld which could bring about real-life hostilities, but you can’t see if people want to do a raid unless they all join the lobby and other people click on the gym, which doesn’t happen a lot unless someone is basically ready to do it. Niantic’s pushing of this kind of “community” event while the game still lacks chat and in-game visual queues only furthers my impression that the decision-makers aren’t designers and are just throwing ideas around in the dark in hopes that something will work out.

Moving in the dark

The overall responses I’ve seen have been mixed. Most people simply want six-hour Community Days back. I’ve seen people who enjoyed the new raids-to-spawn model, but many people I spoke to who don’t spend a lot on the game (but have made purchases) felt it was greedy: Generally, three or more people essentially spending $1 each to extend spawns in an area for 30 minutes doesn’t feel like a win, especially for players who are used to the six-hour model as their standard. Remote Raiders and rural players have almost unanimously disliked it the restrictions, as did local suburban players who were willing to help remotely but couldn’t attend in person.

Zweilous spawning was more of a mixed bag. The shiny hunters seemed down, as the larger model made it harder to find Deino (the only one who could be shiny), was mentioned often, as was the fact that it took up a spawn that could have been Deino. However, my newer players were quite happy with the amount of candy they walked away with thanks to that and the double candy bonus. The XL Candy wasn’t too bad for them either, though Mega Levels certainly aren’t being utilized by a lot of people I know, so their bonuses were quite a bit less than my own.

If all of this sounds messy, then you’d be correct because there’s still one major factor to consider: the shotgun approach Niantic still uses for Community Day. Bonuses were once again all over the place. Increased shinies are the basis of CD, so cutting into that with another spawn obviously is going to create unhappiness. I’ve mentioned that raids bring people together better than solo catching, but Zweilous was also spawning in the wild, taking away most people’s urge to raid it, especially because of the lack of additional free passes. And sadly, Niantic is already pushing to reuse this method for July, with no additional passes and pushing a middle evolution in 4-star raids to “extend” Community Day for 30 minutes.

While many people want longer raid events, I don’t think they want something that’s already common, in any evolutionary stage. I’d argue the people doing the CD raids the most were likely were doing them either to be kind or because they worked during the main event and were forced to pay money to participate at all. I walked away with a lot of shinies and probably more regular and XL candy than I’ll ever be able to use. I got enough Deinos to have already given out several with good stats, which has only further increased my total candy collection.

For Community Day, it really just feels like we had two events in the same day: one for free-to-play people and one for whales to potentially gift the rest of us. I’m sure some marketing stooge is pretty proud of himself for this, but combined with other recent trends, like boxes that add garbage most of us throw away to sell “deals” very few people have use for (and usually these are the people Niantic hurts most, like rural players), Niantic’s greed is something fewer people seem to want to put up with.

As I said, I saw more people out playing the game than I have in a long time. But at the same time, remember that the community I often pull data from – a well-to-do community that is known in a broader community for in person raids – had 85 people participating for Gible Day. Deino is in a very similar position in terms of usefulness and is pretty popular, but its attendance is more than 50% less.

Again, this community doesn’t represent the whole Pokemon Go community, but I’d wager it’s one of the more ideal ones Niantic seems to court and is nevertheless still losing. Niantic seems to be running its game into the ground in order to pursue higher financial gains. The company touts data but has never shown us a comparison to how the three-hour models compare to the six-hour Gible event. All the three-hour events simply pile on bonuses while the company heads hope it works out for the best, which is sadly results in a boring event that at best wasn’t horrible.

That isn’t to say that I didn’t enjoy the June Community Day, but honestly, I’d prefer to lose a lot of the miscellaneous bonuses and go back to six-hour events where I could actually see more of my friends. I love the idea of encouraging raids, but I won’t lie: Even with bonus passes, I don’t think we would have had the time or motivation to hit Zweilous. Again, it was more of the same even for someone like me who cares about IVs far more than shinies.

Should Niantic pull this again, the bonus should be for any raid, but Community Day should be a day. Sure, focus the mega spawns for certain hours, but at least that raid bonus and the event move should last the whole day. Niantic still has at least Pikmin Bloom’s CD last the whole day, and there is very little multiplayer action there, so why does the smaller community get the whole day? Does POGO need to actually fail before Niantic listens to its playerbase?

Leaving people out of a CD is making the December round-up more and more valuable, but Niantic is not known for working well under pressure. When you can’t even get stickers out on time for your own event, it’s hard to keep placing blame on the IP holder. Niantic’s inability to read the room and hyper-focus on its own model may work for an indie dev but seems like a bad move when using someone else’s IP.