A few months back, I was feeling restless in my MMO routine. Guild Wars 2 is my MMO “home,” so I’m always in that one, but I like to have one or two other MMOs to play on the side. For a while, that had been The Elder Scrolls Online, but the Greymoor expansion was really off-putting to me for whatever reason. Plus I’m sick of action combat. I wanted something tab-target. So I went through my list of MMOs. Lord of the Rings Online? I was still grumpy with them for last year’s server problems, lack of communication, and “mini-expansion” shenanigans. RIFT? It’s hard to get excited for a game that apparently has one foot in the grave. Star Wars The Old Republic? I just wasn’t feeling any of my class choices, which haven’t really changed since launch. The list goes on.

Then I read something about World of Warcraft’s leveling changes in 9.0, and I realized that it fixed a lot of the things that were keeping me out of this game. So I decided to give it a shot.

This is notable for me because I’ve never really played WoW. Sure, I’ve had plenty of friends who did, but for various reasons, it never really appealed to me. The first real experience I had playing the game was when I tried Classic back in 2019 when it launched, but I didn’t stick around for more than a month. In that time, I didn’t really bother with Retail because I was there to play with friends, who were there only for the Classic launch experience.

Now that I’ve been playing WoW for a few months, I’m starting to notice that there were a lot of things that I had been told about the game by players that I have found to be simply untrue. Here are a few of the highlights.

Sorry, I just don’t see it. The game world is fine, but I’m less attached to the characters in this game than I am to anyone in the games I mentioned at the top of this article. With no player agency in quests, not even as little as branching dialogue that eventually shepherds me back to the same story events, I feel more like I’m watching a movie than taking part in a story. It’s a good movie, but I wouldn’t call it more immersive than a wide variety of options available to me.

Often, when I talk to WoW fans about this topic, they bring up travel time. “I’m not as immersed in the world of Game X because I can just click a button and quick travel across the map in a second,” they say. “WoW’s travel time is great because it gives them a sense of the scope of the world.” This has never made sense to me because I still have to walk to the waypoint in Guild Wars 2 before I can use it, so I was given “a sense of the scope of the world” when I did that. If I’ve done that work before, why make me do it again, but on autopilot?

And you know what I usually do when I’m on an automount from one place to another? I tab out and surf the internet, or I get out my phone and play a game there. I can think of nothing more antithetical to game immersion than a system that makes me want to play a different game for a while. It just blows my mind that the mentality still exists that this is anything other than a built-in way for the game to stop you from actually playing or progressing to milk your subscription for longer.

Of course, when World of Warcraft launched in 2004, the MMO landscape looked very different. If you want to argue that WoW is super immersive for a game that launched in 2004, then I would have no trouble with that. But in a world where games like Star Wars The Old Republic and The Elder Scrolls Online exist? This game pales in comparison on that front.

I know people who turn their noses up at Guild Wars 2, for example, because all of its zones are technically instanced, with big swirly portals and a loading screen separating areas. I’ve even seen some games boast about the fact that you can walk from sea to shining sea with no loading screens. Obviously, there are plenty of instance barriers when traveling to other continents and planets and alternate planes of reality, not to mention dungeon and raid instances, so this isn’t 100% true of WoW, but that’s a nitpick. Personally, though, I don’t really care. Loading screens don’t really bother me that much, especially now that SSDs are reasonably cheap.

The real irony is that I actually find some of the zone transitions more jarring and disunifying than many games that have loading screens between zones. Take these two screenshots, from the Broken Isles, a newer zone, taken a few seconds and a few feet apart: 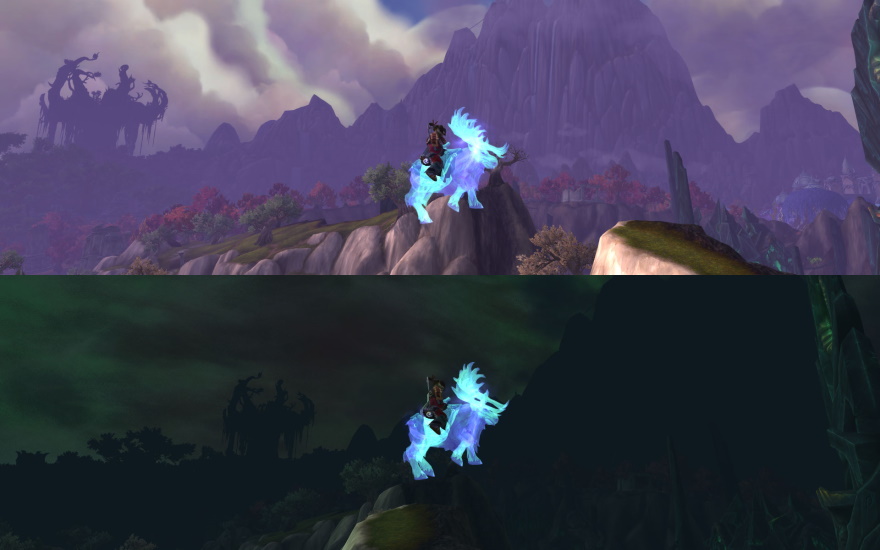 There is a sudden and drastic change in the skybox and lighting, even music, and the terrain shifts suddenly from a forest to a charred volcanic hellscape. I would almost rather there be a loading screen here to maybe create the illusion that my character has travelled farther than a few feet and maybe this change was more gradual.

Honestly, this isn’t a huge issue for me, but I’ve just heard so many WoW fans praise the game for having a continuous world that it was strange to finally play the game and find that I actually liked this less than the alternative.

The community is the best because the sub keeps out trolls

Listen, any time you have a large mass of people together in one place on the internet, there are going to be trolls (and I mean people who think it’s fun to be a jerk to others, not the Darkspear or Zandalari kind). We’ve all run across our fair share of these in all of our online worlds. But one of the ways that my WoW-playing friends often justified WoW’s subscription price versus free-to-play options was that WoW’s community was so great, and that the sub price served as a deterrent for people who just wanted to show up to be trolls.

Friends, that’s simply untrue. Stormwind and Orgrimmar trade chat are some of the most consistently vitriol-filled chat channels I’ve ever been a part of. I know they don’t represent the entire community; I’ve had my fair share of positive encounters with players as well. But I’m always amazed that every time I’m in a faction’s main city, trade chat is so consistently bad. Yes, I know I can turn it off, but at this point it’s almost a social experiment to see what percentage of the trade chat actually has to do with trade. (Spoiler: It’s a very low percentage.)

Some long-time players tell me this was better before server linking and cross-realm LFG because people supposedly remembered other players’ names and nobody wanted to risk a bad reputation, thereby making it harder to get into groups and guilds. Personally, I’m a bit skeptical of that. I can’t say I remember the name of the guy who posted something gross in chat yesterday, let alone six months ago. Maybe it’s true. I can’t say for sure because I wasn’t there, but I’m skeptical. All I know is, the toxic people are there now, and it’s no better than any free-to-play game I’ve ever been in.

Everyone is an elitist jerk

I’ve also been told, mostly by ex-WoW players, that everyone in the WoW community is an elitist jerk, and that if you don’t parse perfectly, they’ll kick you from the group/guild. Yes, this contradicts the above “the community is the best,” so obviously I knew at least one of these was a lie, but I’ve actually found both absolutist statements to be equally untrue.

I haven’t had years of experience with the group finder like some people, but I jump into regular or mythic dungeons when I feel like it. When I do, I’m always honest and up front with groups that I’m a WoW noob and don’t know the fights, and I have yet to be kicked once. Some groups are even kind enough to halt and briefly explain what mechanics to look out for beforehand. One that wasn’t was at least kind enough to point me to the Deadly Boss Mod addon, which warns you of upcoming mechanics with on-screen popups, which is usually enough for me to at least fake my way through encounters. I’m not in a guild, but I see plenty of them being advertised as newbie-and-casual-friendly. I don’t doubt that the high-end raiding scene has more than its fair share of snobs, but trade chat trolls aside, the average player seems to be a pretty normal, reasonable person as far as I can tell.

Endgame grouping is all there is to do

Raiding and M+ may be the favored endgame for many players, maybe even the majority of players, but there is so much more to do in this game! Have you tried pet battles? They’re like Pokémon inside an MMO! Gathering and crafting may not be the most profitable pastime these days, but there’s something relaxing about wandering aimlessly around the world in a zone, picking herbs or mining. Even more relaxing is the zen minigame that is fishing. I’ve had a lot of fun soloing old raids and dungeons with level capped characters for rare mounts/pets, transmog unlocks, raw gold, and disenchant fodder. And all of that is to say nothing of the mountains of story in this game (of varying levels of quality, to be fair) and how much fun I’ve had simply leveling alts. If you’re out of things to do in Retail, give Classic a spin.

If you like raiding and M+, that’s great! But if you don’t, I think there’s still a niche for you in this game, and don’t let anyone tell you otherwise. Including the developers.

One thing that I’ve been told over and over about World of Warcraft was that it isn’t perfect, but it’s a very fun game with a lot to do. And that, as it turns out, is no lie. I’m still not sure how long I will be playing this game — there are so many other great MMOs out there! — but I’m glad for the time I’ve spent there.