GDC Summer 2020 is running all this week, and I’m, well, at home. But much like Pokemon Go, the convention adapted, and while I’ve had a few “con” moments already, it doesn’t feel like it’s adapted quite as well as POGO. Lucky for GDC and us, Niantic “sent” Product Lead Matt Slemon and Senior Game Designer Laura Warner into the wild to help explain how the company changed the game to fit the current times.

We’ve previously covered how Niantic has adapted the game and events for COVID life, but let me recap it briefly here: Spawns have increased, walking requirements have been halved for walking and removed for the PvP arena, remote raids have been added (along with option to invite friends), incense spawns have increased in rate and duration, events take into account that you may be stuck at home (and at various times, additional free items arrive to bail you out), there have been heavy discounts, gifts are not only more frequently dropped and increased in your storage but can be opened in greater quantities, you get daily quests and care packages plus a guaranteed spawn, and really, at this point, you can enjoy almost all of the game’s features from home except spinning stops, fighting in gyms, and trading with people. In fact, just this week, I got one of the strongest Pokemon as a shiny while doing a raid from the comfort of my own bed.

But Niantic didn’t just decide to do this overnight. The team’s said it before this lecture-style panel, but Niantic’s main game pillars are exploration, exercise, and socialization – three things that COVID clearly hit – but Niantic doesn’t simply listen to the playerbase. While it’s a factor, the team also looked at the data. 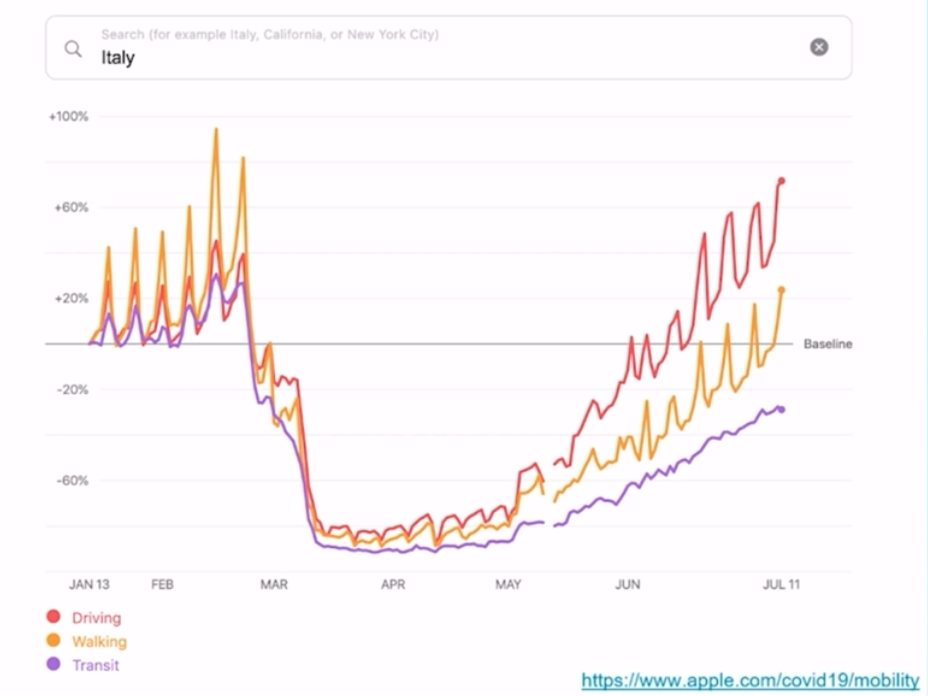 This is a graph Slemon chose to share with virtual GDC watchers (though it’s publicly available) to demonstrate the kind of measurements Niantic used to make its decision to adapt to the COVID problem. It represents the kind of directions Italian people were looking up on their iPhones, and clearly all of those dropped as COVID was hitting Italy hard. It also changed how people were traveling, it seems. While the POGO community would probably argue that many hardcore stateside players (at least) drive around more than walk to maximize their raid/catches, this sort of feedback helps Niantic see what people are really doing.

This also matched the company’s internal data on the number of eggs that people hatch via walking and the number of raids people do (socially). It doesn’t help that the team knew that when putting the breaks on certain features and postponing events like Community Day and various Safari Zone events that encourage people to play together (sometimes in very specific, ticket-restricted areas), there might be players who take a “forever break.”

So, for the sake of your mental timelines, this means Niantic first gathered data, made some interpretations, and then decided to pause some development. It also made quick modifications to features like egg walking and PvP access, especially as the latter would help keep the social part of the game alive to some degree. The December 2019 buddy adventure system has helped a bit in that at certain levels, your buddy would do new things like bring you a large amount of pokeballs during certain events, but Niantic recently stopped doing this. It’s also slightly at odds with other mechanics, such as medals that award you for having more numerous “best buddies” rather than keeping your one, or the fact that walking your buddy may be the only way some people can generate candy for rare pokemon, which also promotes switching your buddy, but I’ll still give Niantic the point anyway. 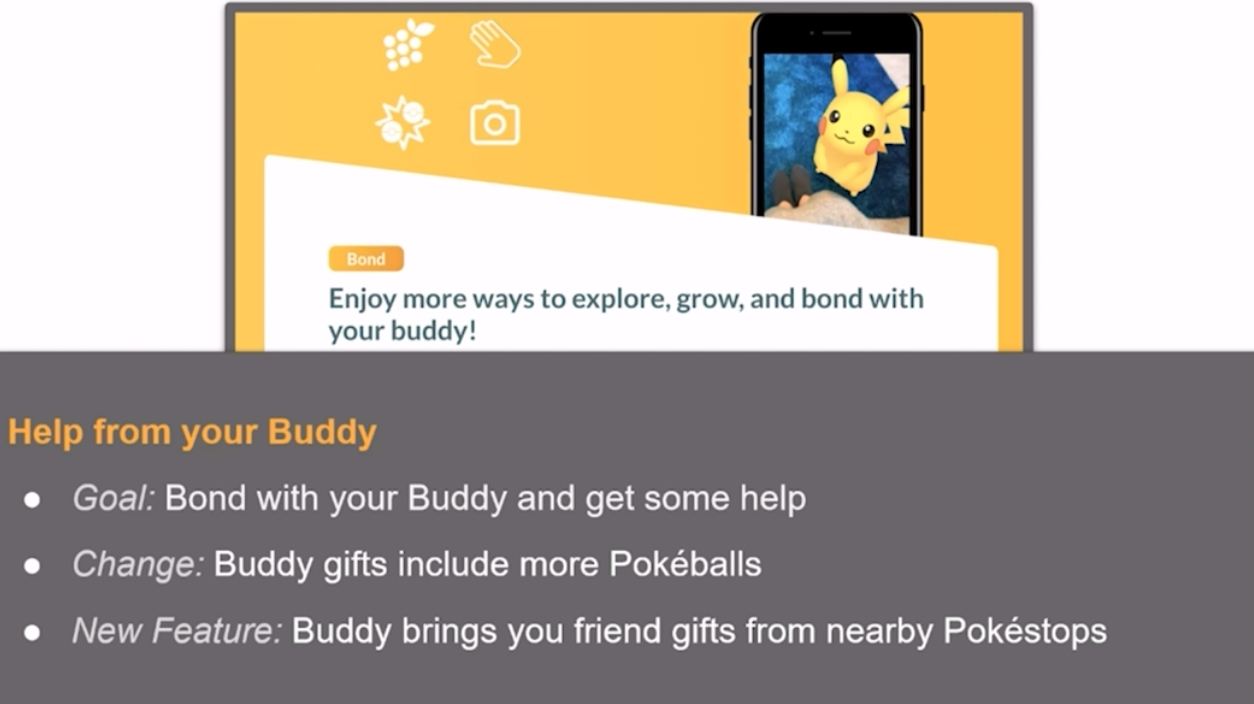 Additional factors Niantic looks at are safety, community cohesiveness, and fun. Clearly COVID puts additional stress on the first two factors, which when combined with the three pillars, makes the “fun” factor harder to work. However, increasing Pokeballs from gifts helped bolster both the social aspect and potentially the “fun” of being able to continue capturing (especially after the incense tweaks), plus various new ways to get supplies helped maintain those core systems. The layering of these systems, additions, and tweaks really shone during the recent GO Fest, as I saw and heard people playing in a variety of ways with increased interest and play sessions (even if people were unhappy with their shiny rates).

The other thing is that these changes didn’t affect long-term gameplay issues or the game economy (which I’m guessing is more store profits than the “value” of any Pokemon). See, as new systems have been introduced, Niantic has made various “passes.” Event passes are one thing, as they’re for a specific, one-time event. By contrast, “premium” passes (which you pay for or get from certain special event quests or high-end PvP rewards) can be used for daily raids or to increase PvP match rewards. The free daily raid pass everyone gets daily, however, cannot be used for PvP, nor can it be used for long-distance raiding. Even during COVID, the daily raid pass is only for raids, and only if you’re able to go out and stand near the raid gym’s physical location, which has been a bit of a point of contention in certain POGO communities.

When asked about the possibility of combining these functions, Niantic said, “For now we’d like to keep the pass types separate because they are very different game experiences and we want to make sure we can tune the different versions of the feature as needed as the situation changes.”

As socialization is supposed to be one of the big parts of a game that lacks any kind of chat system, Niantic’s reply to the possible inclusion of chat seems to indicate that a more limited system might be in the cards. “In-app communication is something we’ve discussed as well,” the studio reps explained. “We have other games with complete open chat like Ingress, and we’ve decided that changes the vibe to something we didn’t want for GO. We’re discussing alternative forms of communication though that better fit the tone of what we think makes GO accessible!” 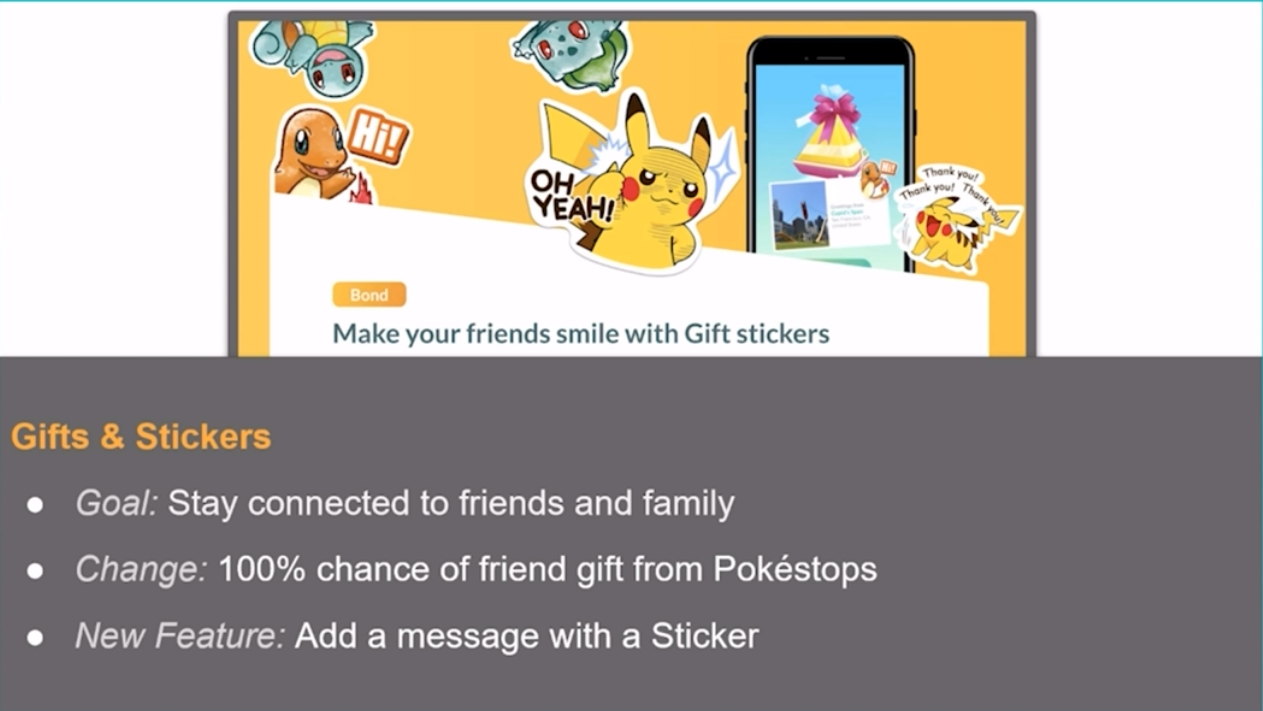 I don’t think this would be the sticker feature added a couple months ago, as the above stickers you can see are the most useful. Stickers also can be attached only to gifts, meaning someone: must open a gift to receive a new one even if it has a message, can receive only one new gift per day, and has a finite number of stickers (each one is an individual item). Plus, the notorious “Bye!” Bulbasaur sticker feels like something someone would send if she either kicked you out of a gym or was about to delete you from her friend’s list. One would hope that pre-selected chat options, similar to what we see in MOBAs, FPS, and other competitive games, might be on the horizon. I tried asking the team if it will allow for some follow-up questions, but those still have to go through PR, who has asked me to sit tight while they look into that possibility.

Let’s end on a good note: Of all the COVID specific changes, Warner and Slemon noted that “remote raids had much deeper engagement than [they] expected. The social elements were something [they] decided to lean into so [they] added friend invites to the feature and it’s still snowballing the go social scene during COVID.” With any luck, Niantic will see that proper restriction and monetization can allow for gameplay that the studio previously didn’t want to allow. Let’s hope long-distance trades will be on the horizon along with the “mega” changes that were hinted at towards the end of the presentation.