END_OF_DOCUMENT_TOKEN_TO_BE_REPLACED

I’m going to be totally honest and say that I expected more revelations for PAX East for Final Fantasy XIV. Yes, I realize that at face value that may, in fact, be the dumbest possible thing I have ever said since we now know the release date will be June 23rd, and that’s kind of a big deal. But the release date was so… expected, you know? It was a reveal, but it was a known unknown and an obvious reveal to include.

Perhaps I’m just being a bit more contrary because it also means that for the first time in Final Fantasy XIV‘s history since the reboot, we actually have a dead period. Not a completely pointless period, obviously, and enough time to get your main fully kitted-out in upgraded Poetics gear and the like, but it’s still a gap. We’re expecting the last patch to drop at the end of March, and it’s going to be all over then but sifting through the pieces.

My money for the expansion release had been on mid-May — enough time for the last bit of story to sink in and such, but not enough time to really sit around and contemplate the many ways in which Eorzea is now in trouble. Instead, we’re getting late June, and that’s a different prickly ball. There’s space for a break if you need one, which seems thoroughly unexpected. It’s nice for me personally, but it’s still a notable gap.

Of course, that’s a notable gap by Final Fantasy XIV standards, and I have to remind myself that many other games would think that a roughly three-month gap between the last part of a major patch and an expansion is pretty darn solid. Heck, World of Warcraft is still struggling to get that gap down to less than a year. So perhaps I am too harsh.

For the record, the original plan had been mid-May, so my thought process apparently lined up with the developers’.

Other tidbits here and there weren’t revolutionary, but they were enlightening; I liked hearing about the fact that Samurai and Dark Knight had apparently been neck-and-neck for the tanking slot, which means we almost certainly will see the job in the future. It also implies, at least to me, that what we see and get is closer to the tip of the iceberg than anything; I wonder if perhaps there are other jobs, classes, and the like that just have not yet found a place but are still half-finished. Musketeer seems an obvious one, for instance.

We’ll get to play with a new benchmark soon, and it was hinted that we can play with Au Ra character customization. While that does not provide an absolute height reference, it should at least give a baseline for comparison. There’s an unusual amount of sexual dimorphism present in the screenshots we’ve seen thus far, so we can hopefully find out whether that’s just a matter of unfortunate heights being chosen or a natural part of the race.

I don’t want to be ungrateful, obviously. Hearing about the impending release and knowing that we can plan for it is a good thing. At the same time, while we know a lot of abstract details about the new jobs and what’s coming next, we have a dearth of concrete information. It’s all vagueness and speculation at this point, with no clear picture of the mechanics of these new jobs or what we’re going to be doing, by and large, within the expansion. 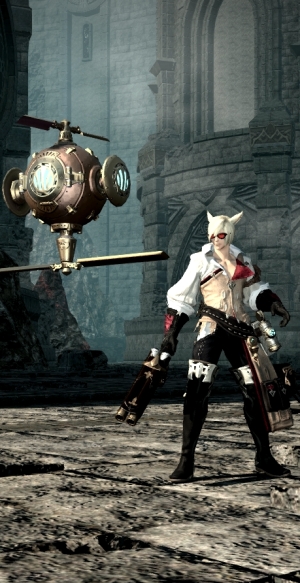 Some of that is to be expected, obviously, but the result is that the “big reveals” we were promised feel like less than revelations. That’s not horrible, but it means that I walked away feeling like a lot of the substantial information was a rehash of what fans already knew, and the parts that were new weren’t too substantial.

Case in point: the flythrough of the zones. Obviously, they were lovely. I’m sad that we don’t have any housing options to make our homes emulate that mock-Tudor style of Ishgardian dwellings. But very little of it told us anything; we already knew, for example, that we would be thigh-deep in dragons as we traverse Ishgard. It’s been implied.

I am quite curious about the dwellings that we see in the Dravanian zones, though. We’ve been given a picture of the Dravanians up until now, and I’ve long maintained that it’s not an accurate picture; I’m of the mind that Ishgard and the Dravanians were the same nation at one point. Even putting that speculation to one side, though, there’s more going on here that we have not yet been told, and I for one am fascinated by what’s out there.

Similarly… what is Alexander? At a glance, it looks almost Garlean, but it’s awfully large to be from the Empire and that far from any major Imperial forces. A primal has been summoned within, yes, but where did the original come from? It’s not right for ancient Allag, and it sure as heck isn’t Goblin-made…

We’ve got lots of questions and quests that I had hoped we would get at least hints of answers for if not actual full answers. But here we are, and very little has been revealed. It’s going to be a long wait until June, in other words.

As always, feedback may be left in the comments below or sent via mail to eliot@massively.com. Next week, I want to talk about how you can fill your time up until the expansion gets released if you’ve finished up most of your main goals — and odds are high that you will have done so well in advance of the release date.

Roll on 23rd June! I can’t play at the moment because of the remodelling work we’re having done at home so the gap will be useful to catch up on. Very muchly looking forward to playing around with the Au Ra character creator and also, as a healer, astrologian…

I’m looking forward to the new tank class.  I love tanking in this game and getting a third option to play around with will be really  nice.

Jay_Bird I just came back about a month ago having not played since right after 2.1, I for one an relieved by the June release date.

thatchefdude DPandaren Um, no they didn’t. Musketeer had a Guild Hall like how all the other classes had a Guild Hall, it was located in Limsa where the current Marauder’s guild is located. And it’s been just sitting there since people were playing 1.0. There was no datamining at all for that information.

DPandaren Oh please, fans datamined the musketeer class files from the original 1.0 beta and they were still there for release….
That class may not even make it into the game until 2016, XIV has been datamined to death if you want that info google it

Seeing the new AF2 sets (GSM4Lyfe) was a pretty nice reveal…
Also, I believe it was said in a Live Letter that “You don’t really build a home in the middle of a war zone.” with more or less a ‘Look Forward to it’ in regards to actually having Ishgardian/Alpine building in a feature patch after the expansion launches.

I’m not complaining about the release date as I haven’t even come close to seeing all the current content, but I was definitely hoping for some better reveals. Like, can we keep our chocobo out while we’re in the duty finder? Can we summon other mounts when we have our chocobo out? Are you planning on making the inventory and retainer UI any better?

They are minor complaints all told but there is just this pile of little things that drive me insane about a game I ended up loving.

As far as I know, it’s not so much that a primal has been summoned within…more that a primal has been summoned *into* it (by the Goblins, who worship Alexander). As in the abandoned fortress became the primal and so the big building is now the primal.
The question then becomes – did it becoming a primal change its appearance? Given how it looks like a being of some kind now (arm-like elements, the top having a head and eye like quality to it, etc), it not looking the same before becoming a primal would be my guess.

I had the same reaction regarding waiting until June.  I thought it seemed a bit far and there would be a lull for me, but then I remembered the year long WotLK wait for the next xpac.  The wait here isn’t so bad.