When I’m perusing my One Shots mail folder seeking that special picture that will make the headlines, I’m not looking for anything in particular. I just know it when I see it. It’ll make me drool with eye candy envy, it’ll tell an interesting story, or (in this case) it makes me laugh.

Reader Siphaed spent his time well in ArcheAge, apparently: “Before my self-exile from the game, I had become a majorly wanted criminal for… applying true justice (killing same-faction bots and uprooting illegal farms found in the hillsides of the world). Apparently my actions were not favored by the local player jury, and they claimed my actions to be criminal. So after busting out of jail I decided to hold a protest in the city center water fountain. Keep rowing on!”

For a means of transportation, it’s certainly not the worst I’ve ever seen. So what else do our fair readers have to show us this week? 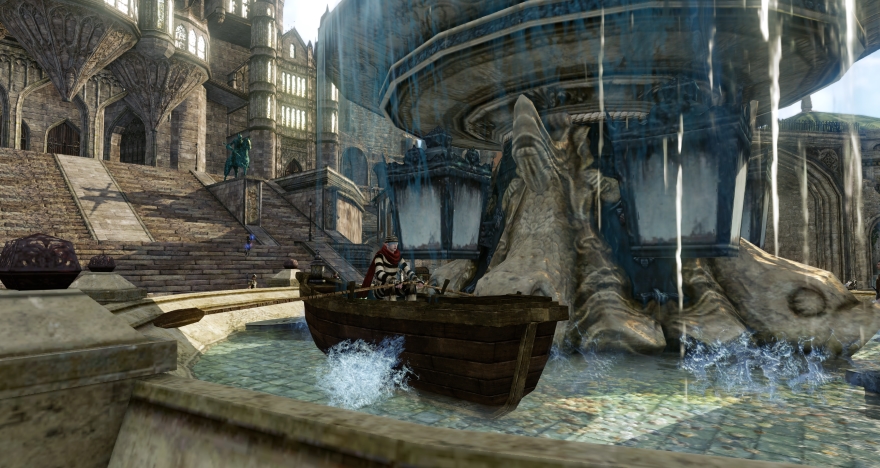 “Warping around in EVE Online, I usually am able to manage my space anxiety,” reader Dirty Klingon sent in. “I’m kind of like Kitty Pryde in that I hate space. A lot. I can’t really help it.”

Then why in tarnation are you playing a space-based MMO? I’m sorry, but it must be asked. (Bonus points for somehow combining EVE and X-Men, however!) 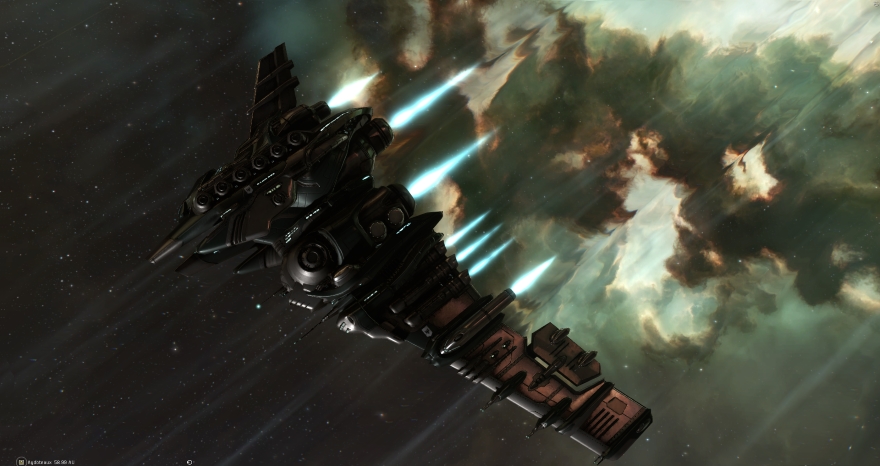 Sometimes when you’re so close to beauty on a regular basis, you take it for granted and stop seeing it. It then takes someone else to point it out to you and make you appreciate it anew.

That’s how I felt with reader Wild’s picture from Lord of the Rings Online, a game that I still consider to be quite pretty. “Here I’m just hanging out taking photos of Ered Luin, imagining the great ships and journey west,” he said. “Basically just appreciating the stillness between quests.” 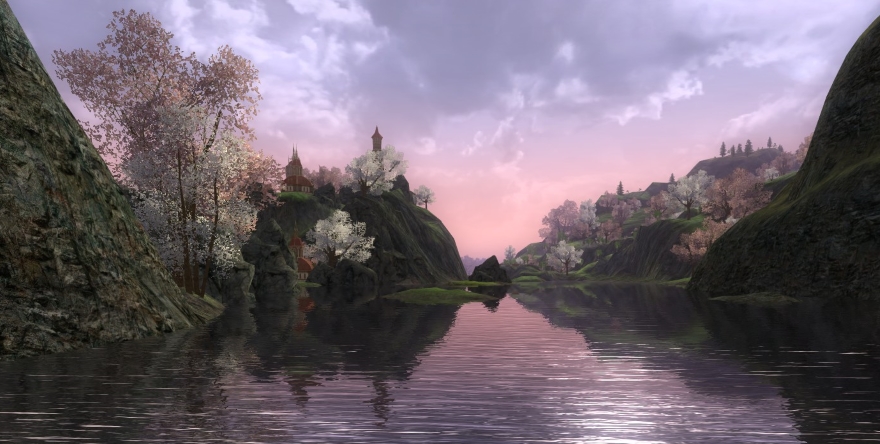 “The game version of Defiance is a bit of a mixed bag. The show is better, but the game’s main storyline is actually quite good,” reader Tyler submitted. “They treat it much like a television series, with an episodic storyline focused on a small cast of recurring characters. I think this is much better than the endless precession of throwaway NPCs we see in most MMOs. In this shot, my Castithan girl and several of the core NPCs engage in an armed stand-off with Dark Matter terrorists on the Golden Gate Bridge.” 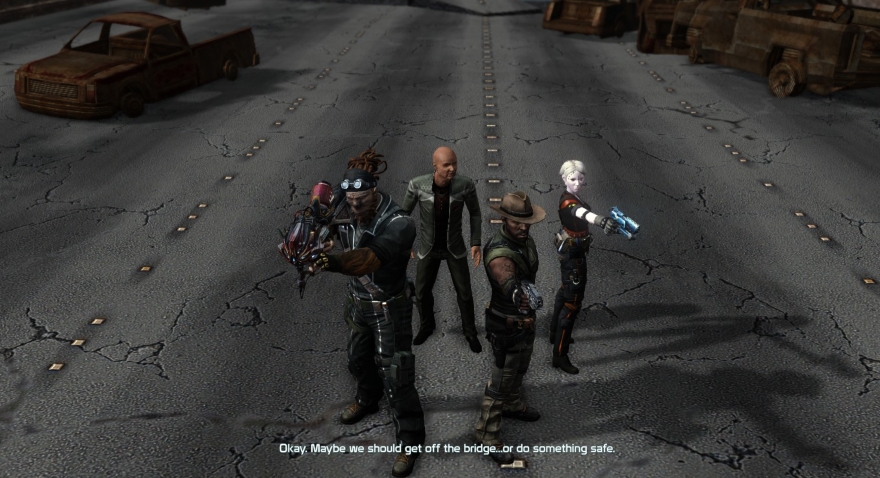 For this week’s It Came from the Comments Section!, we’re featuring a game that’s slightly… taboo. But hey, I’m glad to see Star Wars Galaxies continuing to live on, even if it does have to ride into the grey area of existence.

“Here is a screen from a recent Dark Cult of Massassi event,” reader Naritha said.

Since selfies are all the rage lately, I want to see some mugs in my inbox for the screenshot challenge. Don’t just give me a deadpan face either; use some emotes and a clever background to spice things up!

dirtyklingon Vexia zyrusticae You might want to re-read my posts because I’m not entirely sure you’re getting the points I’m trying to make. Or at least you’re not actually responding to them.
Nowhere do I imply that it is ok for anyone of any gender to cross another person’s sexual boundaries, ever. It’s not right for men to forcibly sexualize women as long as women do it to men, too, and vice versa.
The comment you made toward the original post was: “i wonder when not being an overly judgemental prude started meaning one must be sexist.”
I have argued that people who are critical of female representations in games are not in this case arguing from the moral perspective that “showing women’s bodies is evil,” but instead that it’s degrading when an outfit that is designed one way for a male character is usually stripped of material for female wearers in order to give it a sexual appeal that is designed to suit a heterosexual male audience.
This is important: it does not matter that not everyone will find the woman’s outfit sexy, that some people find fully-clothed women sexy, or whatever unique and varied fetishes that people may have. We’re talking about how the outfits have been changed to cater to our shared cultural meta-narrative about what is supposed to make a woman attractive to a heterosexual man. Obviously people are going to have different opinions, but still those opinions are informed by the dominant cultural values, whether they are actively in line with or consciously against said values. Unfortunately, the greater current of values is so embedded and so dominant that one individual’s experience is not going to just change it.
But in fact, those of us who do critique it do so because we want people to realize the kinds of cultural nets we get entangled in and hopefully work to free ourselves from them; that means recognizing that every human being has the right to their own sexuality, but everyone also has the right to be excluded from sexuality when it’s either harmful to them or they just don’t want to be involved. Beyond that, I don’t feel like I’ll probably put forth any more energy to continue reiterating the points I’ve already made and elaborated on. It’s there if you’ll only read it. :)

dirtyklingon Vexia zyrusticae “i can tell you for a fact women treat men as sexual objects just as often as women do, just in different manners of doing it.”
Afraid I’m gonna need more than a series of anecdotes for that.
Part of the problem with talking about these things is the simple fact that, unfortunately, women simply have, on average, weaker libidos than men (obviously, exceptions exist both ways, but the supply-demand imbalance should be completely fucking obvious to anyone with a functioning brain). And of course, as mentioned, women have been subject to sexualized depictions for the better part of recorded human history. It was only back during the Greek and Roman periods that mens’ bodies were idealized in such a fashion and even then they are depicted as powerful in addition to alluring, as opposed to the passive depictions of womens’ bodies as objects of desire. That’s a fuckload of cultural baggage that cannot be undone in a single generation.
So, yes, women do not generally agree on what a good sexualized depiction of a man should be, but all of the above means that that is something that should only be expected as a matter of course. We have hundreds of years of sexualized female depictions to work off of. There’s not anywhere near as much to reference for men, and we certainly haven’t been raised culturally to idealize mens’ bodies in anything close to the same fashion. It’s too difficult to separate nature from nurture, so we must acknowledge that we do not, and cannot, have all the answers.
Ultimately, the end goal is simply to have true equality of the sexes regardless of whether or not it seems sensible for the particular outfit or appeals to a large number of people, simply because it is the right thing to do. It is the developer’s responsibility to then provide enough variety to not turn off a large swathe of players, as simple as that. The only way to do that is to have a good variety and not show favoritism to one side or the other. There’s no getting around it.

“and i don’t really see any practical outfits for male or female characters in any mmo or many games either way up or down top to bottom. no mater the gender of the avatar there’s not a whole lot that real world practical to the outfits 99.110% of the time.”
There is a sliding scale here. It’s not an either-or. Generally speaking, the male versions are MORE practical (this does not mean FULLY practical, just more usable) than the womens’ basically 99% of the time. That’s just how it is, man. It’s undeniable fact.

Siphaed Nice! Lots of character in that, erm… character.

dirtyklingon Vexia zyrusticae The other day I rolled a new female dwarf, and I was the only femdwarf in the starting zone without a name that referenced menstrual products or euphemisms for female genitals. Just because you don’t see something, that doesn’t mean it’s not happening.
Also the problem with sexualizing a man compared to a woman is that women are generally sexualized as objects (or at least need to have some “ornamental” aspect to them) whereas men are generally sexualized as actors. To change that type of thing will require unloading a lot of cultural baggage over generations.
Lastly, a point which reflects my first post, is that people not only need the freedom for sexual expression, but also the freedom from sexual expression when/if they don’t want it. That’s why people usually don’t make a lot of noise about Final Fantasy XIV where you’ve got options and gender equity in armor as opposed to the aforementioned B&S example where Zyrusticae makes it clear that the vast majority of women’s outfits for certain races are “sexed-up” versions of the men’s outfits. There the implication is that “man’s outfit” = “default, practical” whereas “woman’s outfit” = “sexy, impractical.”

This one was back from my SWG days. One of my favorite things to do was log in really late and solo the Star Destroyer in Deep Space, of course while I blared music from the Star Wars movies. Always made me feel like a badass. On one of those nights, I just happened to get the perfect screenshot of my X-Wing escaping from the Star Destroyer right before it went kablooie.

On the theme of ships, here is one I took in Ascent the other week flying over a moon I discovered with purple oceans (Ammonia) and purple clouds

zyrusticae I must say that the third outfit from the left in the third picture from the left (the white one with the bow) is so freaking adorable! I think I would want to run around adventuring in that if I were to play this game. :P