Back at E3 2015, Producer Holly Longdale revealed an exciting tidbit of information that may very well put a smile on EverQuest II players’ faces. And now, we can share that secret with you! What’s with all the secrecy? Longdale noted that as much as Daybreak initially wanted to broadcast the news immediately, the studio decided to give the players who wanted to a chance to discover this surprise for themselves. So, in keeping with that, we’re warning you: Do not click ahead if you want to be taken by surprise in the game.

OK, we warned you. You can still back out. But if you are extra super sure, go ahead and reveal the secret below. And those of you wanting to keep it a surprise, I suggest you avoid the comments section as well!

What are some of the best words Longdale could utter? How about, “We’ve resurrected the boat zone and the Isle of Refuge.” That’s right: The Isle of Refuge is a real thing again, along with the bobbing beginner boat captained by Varlos. Players on both the PvP (Deathtoll) and PvE (Stormhold) progression servers can choose to start in either the Overlord’s Outpost or Queen’s Colony, the two faction’s versions of the infamous isle — the very isle that has been greatly missed by many players since it was phased out years ago in favor of said new starting areas. Talk about a nice surprise! Longdale was very excited to share the news. She told me, “I know there’s a good percentage of players who are like, ‘Don’t waste my time if you don’t have the Isle of Refuge,’ but I think there is something valuable about surprising players.” 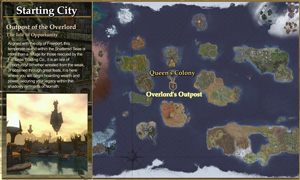 But wait, didn’t the devs say it wasn’t possible to bring back the Isle of Refuge? Yes — and that is what they honestly thought, too; finding the isle was a very pleasant surprise for them as well. Longdale explained that over the past eight years, devs have passed on to other devs that the isle was unrecoverable. That information was assumed to be true, so that’s what the team then passed along to players. However, Game Designer Carlos Mora decided to “go look and see what’s going on.” Apparently, he hit the jackpot: When he uncovered the isle and flipped it on and found that everything was still there, including all the starter and collection quests. Players will be able to soak up the nostalgia, or even experience for the first time what they’ve only heard about before.

So where has the boat and its captain been all this time? Longdale described the idea for nodding to the elapsed time, including a skeletal NPC that shows its wear and tear at being at sea — and being sea sick — for so long as well as a bit of fun dialogue.

Unfortunately, the same has not held true for the racial suburbs. Although the team is looking into it, it may not have the same happy ending that the isle did. That does not mean that fans must forfeit all hope that they will ultimately be found as well. As Longdale put it, “Honestly, I don’t rule anything out. We’re listening and trying to do all we can.”

Another thing players won’t see on the progression servers is the ability to claim any veteran rewards. So it truly is like starting over; there will be no extra buffs, trinkets, or goodies for veteran players. Additionally, the Marketplace will be limited.