END_OF_DOCUMENT_TOKEN_TO_BE_REPLACED
It’s Templar Time! After looking at the Illuminati and delving into the Dragon, it’s now time to tie up this trio of guides and talk about the final faction in The Secret World: the Templars. I could fall back on that old adage of “saving the best for last,” but this secret society may not be the best for everyone. That’s the whole reason behind these faction guides — so folks can get a feel for what they may want to play. And with Secret World Legends launching its early access tomorrow, the time to pick is close at hand.

As much as I have been tempted to roll a different faction for SWL, it’s going to be very hard to pass up being a Templar. I can’t deny that it has been my my favorite faction; the philosophy jells better with me, I prefer the deck costumes, and I enjoy the wit of Richard Sonnac’s messages. But what really cemented this society’s place at the top was the final story mission, Virgula Divina. Doing the Illuminati story mission felt like a let down by comparison! If you’ve never visited the playroom, you are truly missing out. Could this become your favorite faction, too? Let’s take a (spoiler-free) look-see at what it has to offer.

Tradition, tradition! Tradition! This simple line from The Fiddler on the Roof sums up the Templar philosophy pretty well. This society takes seriously its ancient charge to save mankind (even from itself!), and it still leads a crusade against evils that threaten mankind. And nothing is more evil than undead and demonic abominations! OK, so maybe the Illuminati come close for them. The organization’s focus is on order and discipline; the structure is militaristic. TSW’s secret society traces its roots back to Biblical times, but as ancient as it is, there is a movement within to make it a bit more modern.

The Templars also stand out because of the religious zealousness of the group, although unlike the real-world counterpart, no particular religion is espoused in the in-game organization. Instead, the focus is simply on faith. Don’t think that faith makes Templars weak, though; the group will level an entire city to eradicate one demon. There’s the big picture, after all, and casualties are expected in the war. Templars seem much more concerned with morals than the other factions.

Speaking of standing out, this is also the most visible of all the secret societies, which is illustrated by its headquarters in downtown London.

Subtlety is not the Templars’ strong point. The Templars take the second half of the phrase “hide in plain sight” to heart; the headquarters is a large, impressive building right in the open in London. Templar banners even line a whole block! The architecture screams “old money” with its marble columns, chandeliers and vaulted ceilings as do the plush furnishings and massive paintings. Instead of hiding, this group opts for a show of strength.

As far as HQs go, Templars also got the best location. London was the city that was intended to be the player hub. As such, it had the bank, the post office (for mail and broker), the tavern, and merchants. Sure, the other factions headquarters finally got bank liaisons, but that took years. Until that point, everyone had to come to London to take care of business.

To rub in the coolness of the Templars’ HQ, London also has a Templar-themed nightclub: the Crusades. Sure, everyone can enter it, but there is no mistaking which faction is representing there.

Where the Dragon have a mute child leading them, Templars have a fatherly figure. Richard Sonnac presents as much more sympathetic handler than the other factions, giving encouragement as well as praise. He sympathizes with the player’s desire to save bystanders while still reminding about the big picture. Sonnac can also be sarcastic, although doesn’t rival the snark that Geary shares. Instead, his mission messages are often peppered with literary quotes, including poetry and the Bible. He’s the model of an English gentleman; his demeanor is calm, and he has a natural air of sophistication. He doesn’t use intimidation or insults with players but entreats with reason. This is a man who just doesn’t lose his cool. 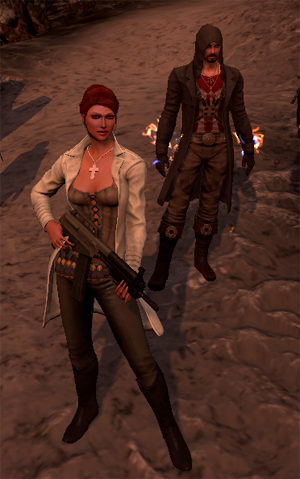 One of the first Templars players meet is Rose White, the white beanie-clad fighter who was part of the group in the Tokyo flashback that started the game. Of all the other Templars who inhabit TSW, Dame Julia Beatrix Tyburn is probably my favorite. Maybe it’s because she’s such a stuffed shirt, an old relic, totally befuddled by technology but oozes pride and strength. It’s charming.

Konrad Engel and Zamira Vata, who hang out in the Horned God in London, are amusing in their banter. The two appear to have different philosophies about the Templars, and they bicker. However, they appear to be pretty close and respect one another.

Another colorful character is Iain Tibet Gladstone, the Templar librarian. He’s basically under house arrest (with the twins Mary and Catherine Stuart being his guards) so the organization can keep him — and the rest of the world — safe. He likes to regale players with his past adventures traversing the globe.

What other peculiarities do the Templars have? Their disdain for other-worldly creatures is exhibited at the firing range. Where the Illuminati use holograms and the Dragon use stuffed dummies, the Crucible’s targets are all live rakshasa demons tied to the walls. That’s a tad gruesome!

And lets not forget the color coding! If opening your closet has you happily seeing red, the Templars are the group for you. Everything faction colored is red, from pets to uniforms to special clothing. Those who like a crisp military style will prefer this rank clothing over the other societies’ gear. The Templars also have the best (in my opinion) deck outfits; my all-time favorite is the Puritan. However, since the outfits are now tied to weapons, chances are that all deck outfits that make it into Secret World Legends will be available to all factions.

And that’s the gist of the Templars. Now that you know all three organizations, which do you think would be a good fit for you? Let us know what you will be choosing when the Secret World Legends’ doors open!

Templars are my fave too!

Well looks like I am going to be fighting for personal advancement and looking out for the little guy as usual, whichever faction I go with. Yup stealing from the rich and trying unsuccessfully to bring good to the world !

Templars seem much more concerned with morals than the other factions.

We of the Dragon follow a subtler morality that the Templars can not understand.

I’ve canceled my ESO account because I know my head will be buried in SWL when it comes out!

I started the game on Templar faction, but moved to Illuminati when a friend started up later. My templar’s name was reserved, so I’ll definitely do Templar again. The world is so messed up as it is! So I like having the “nice” faction to offset crazy monsters.

Somewhat off topic, but does SWL still require you to use two different weapons? Can you mix and match them at will or is it the sort of thing that’s only optimized with certain pairings?

Still has the two weapons, yes. The freedom to mix and match *might* be a bit more restricted since it seems they are grouped into “classes” that somewhat serve the role that decks did in TSW. Might be that they release enough of these classes to cover all possibilities, but we’ll have to see what they plan to do.

I believe you can have a second weapon of the same type slotted if you wanted, which would let you have more skills from that weapon type on your bar. Of course that would lose some of the weapon synergies that can take place between types.

You do have to have two different weapons, and you can mix and match them once you have unlocked them all. For people who owned the game previously, you will have the weapons unlocked from the start. Of course you just need to have a weapon of the type you want to use.

But yeah, dame Julia is the best. Pity she’s only active during some of the main missions.

Edit: I give up. This comments system sucks.

The other factions just don’t appeal to me. Templars all the way.

“outfits are now tied to weapons” i hope this is not true, i loved the idea of changing outfits as i like, i also chose a templar, basically i prefer Sonnac.

You can still change outfits all you want. I think that was just referring to the fact that there used to be specific outfits granted by mastering certain build decks. Different factions had different decks available to them for which an outfit would be granted.

There used to be outfits tied to weapons, too. If you learned all the inner ring skills for a weapon, you got an outfit.

It may be that there are no longer deck outfits — perhaps because there might no longer be decks. In that case, all skill-related outfits would be weapon outfits. But it’s also possible that there are new outfits available for greater levels of mastery within a particular weapon.

I really do hope that faction outfits remain in the game, even if there are now different methods required to earn them. The faction uniforms will certainly still be there, but the deck outfits had some really cool stuff.

So the old deck costumes are definitely still there in one form or other. The question will be in how we get them now. :)

Oh, I meant you earn it when completing a weapon (not a faction deck), not you have to wear it with that weapon. Sorry!

I don’t know what it is, but there definitely is something that I loved about the Templars. The Illuminati are fun for a lark, with their off the wall antics but I was never able to get behind the stupid gas masks. The Dragon fit my personality the best, and who can dislike a faction that welcomes you with a free… well, never mind. :p But at the end of the day, the Templars are just the coolest of the lot.

I’d tell ya which faction I’m going for, but then it wouldn’t be a secret. Nah, better I just manipulate you without you knowing it.