END_OF_DOCUMENT_TOKEN_TO_BE_REPLACED
Those of you who were hoping to casually stroll into the eponymous Mordor in Lord of the Rings Online will be sorely disappointed today, at least if you believed the launch plan. There was no shortage of speculation on whether or not the expansion would be delayed, and with no time left until the launch, that delay has happened. Officially, a bug was detected in the expansion that couldn’t be addressed before the originally planned July 31st launch date.

While the game will be delayed, there’s no official new date for the release of the expansion, although the original terms of release gave Standing Stone Games the option to delay for up to a month. We’ll keep you posted as soon as we know if the game will release late in August or closer to now; all that’s known for sure right now is that it will not be today.

Right, because no large-scale software project had ever slipped a deadline before Columbus Nova bought SOE.

Let’s just say the way they handled this entire release date thing doesn’t look very professional from the outside, heh.
First they shy away from giving a date altogether and hide the info in the fine print below the pre-order packages (for an expansion release!). Then, after finally setting a precise date, they have to announce an indefinite delay less than a day before the planned launch, because of a problem that “impacted the ability of monsters and NPCs to move around”, which sounds rather severe. Makes me wonder if they have any automated testing.

I wish they had released Mordor in autum and spent the couple months until then for stability and performance fixes in the engine/server.

Your welcome Eliot. Yeah I knew this was going to happen. I posted in a couple of threads yesterday morning about the bugs. Then suddenly boom both threads I posted in were deleted by Mods and the delay thread was posted which was weird for a Sunday. So I sent in the tip first thing this morning.

Never has such a good game been developed by such a lack luster company.

Perhaps, but AA, TSW and EQN say hi. Although none of those are as good a game as LotRO so you are correct.

Uh…they wait until launch day to tell us and don’t have a timeline for the new launch?

Yeah, that instills very little confidence. I’m not a player, but I was planning on giving the game another go with this expansion and the updated character models so this is disappointing. Oh well, more time for other games, I suppose.

Nah they told us yesterday that it wasn’t happening. The bothersome part was a lack of update since yesterday.

Heh! Yeah, I was happy with the announcement but the silence that followed was bad. The announcement said that the patch was actually causing issues with older content.

I was like “ugh” please no, I had client crashes over six times Sunday due to running around and doing things in Minas Tirith. I’m rather irked with the issues there as an aside. Until Minas Tirith I’d never had an issue with client crashes before with LotRO.

I’ve decided to now just avoid it and later on go back and do quests there that I hadn’t knocked out with my champion. Once the new content goes live though I plan on avoiding the new areas and working on some of my alts who are in their 40s and getting them to Moria.

Not a big deal … managing and developing software projects is not an easy thing, better late than buggy.

Sure..but knowing history of the game, it will be released late AND buggy.

They could of course have minimized all this by not starting large scale beta just a month before the planned release.

I knew someone will say that :-)

They could do so much to make the game better, true for many MMOs. 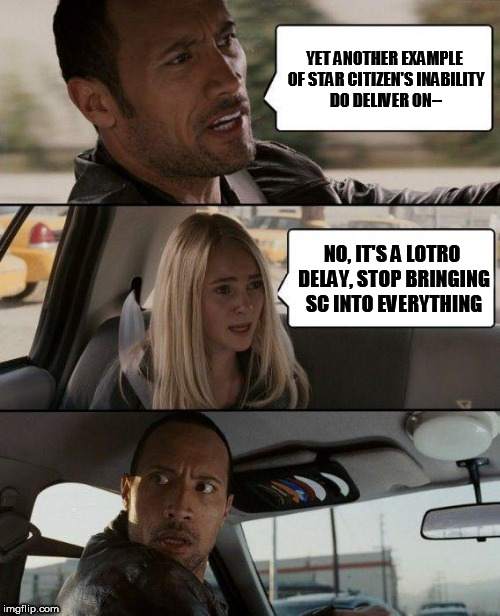