END_OF_DOCUMENT_TOKEN_TO_BE_REPLACED
Here’s the thing that I love to point to whenever I talk about this portion of Secret World Legends: New England is really kind of just like this.

The thing about Kingsmouth is that you can’t really appreciate Kingsmouth unless you’ve actually been to places that feel pretty much like Kingsmouth with a lick of paint. Change the street layouts and call it Vineyard Haven, and I wouldn’t really notice the difference. There’s a degree of verisimilitude there you don’t get with games, which are usually either concerned with the bustle of cities or fanciful lands drawn from cultural theme parks.

Not so on Solomon Island. Yes, it’s in Maine rather than my personal stomping grounds of southern New England, but there’s a real sense that you’re actually dealing with a real place, modeled after real New England seaside communities, complete with a large number of people who don’t seem to be taking it as all that much of a deviation from the norm. When I tell people that this is pretty much true to reality, most of them think I’m joking; I am not.

For my money, this is the part of the setting that feels more real than anything else (and since I’m expecting to more or less be repeating the story on down the line, that’s probably a good thing). Egypt and Transylvania both feel like MMO regions, based far more in “this would make for a good area loosely inspired by the real world” than actual real locales. Tokyo is given a thick layer of Filth to give it a more alien feel. But here… this is where it feels like an actual secret world, a place that’s just hidden off the corner of our visions.

The island is locked away from prying eyes, no one knows what’s happening, and through it all there’s a basic static underneath the region that everyone just accepts is par for the course. Rather than taking the real world and adding fantasy, it just dials up what’s already present.

If you’re not from the area, perhaps it hits you differently. (You might have some of the flavor in upstate New York, I suppose. But then, you guys call hamburgers steamed hams.)

The reason I bring all of this up, aside from the fact that it’s true, is that this is probably the area where the storytelling has the least heavy lifting it has to do to really get an investment rolling. Unfortunately, as I discussed last week, it never really rises above “competence” in storytelling. You get interesting NPCs who spout off nice opening monologues, and then you go do some things without any further input from them.

I never thought I would miss quest turn-ins, but there you have it. At least those create the illusion of a dialogue. Yes, every game is trying to create the illusion of it, but the storytelling of The Secret World before and SWL now still feels like a mute observer wandering into the start of someone’s expectant soliloquy.

And that’s the part that doesn’t feel very real and sort of jars me out of the experience. An older woman calmly shooting zombies because it needs doing while apologizing for the mess? Sure. Having that woman be someone whose idea of culture is watching reruns of Cheers rather than relating Greek myths? Totally fine. Having said character explicitly say that, right after relating the story of Sisyphus? Now you’re hammering me over the head with “look at this quirky character” and you’ve completely lost the thread of things.

There’s more to grouse about, but I can save that for later. Suffice to say that I still love the world and find the storytelling, at best, a thin pinhole glance in. And you don’t need to sacrifice narrative for glances.

But let’s talk about something wholly free of grousing, as little as it might seem, because it’s one of the most brilliant bits of additional gameplay I’ve seen so far, and it ties directly into last week’s poll. In order to unlock Blood, I had to get Marks of Favor. How do I do that? Why, clearing Daily Challenges. And how do I do that?

Well, I do the same thing I was already doing, really. 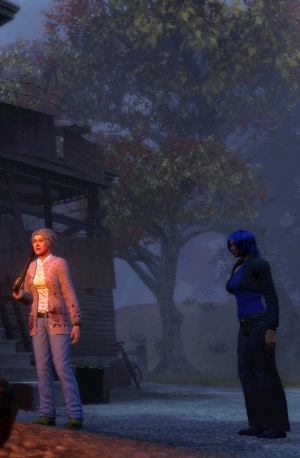 The thing about the game’s Daily Challenges is that while there is an “optimal” path to blow through them, they do something elegant in rewarding players for doing what they’re naturally inclined to do anyway, at least through the leveling gameplay. Yes, you might pull a few more enemies than normal on the way to clearing a given challenge, but the point is that you’re motivated to make some small but steady progress along the way.

If you just play the game as designed, you’ll clear them almost by accident on your way to the level cap. But if you just log in and prod at the game, you will miss them. I appreciate that design. It encourages you to play for a while without demanding back-breaking lengthy sessions at all times.

Less encouraging: The game’s Steam bundles are on sale, but said bundles do not actually contain Aurum, which is the currency you buy for real money. There is supposedly a reason for that, but it simultaneously removes the biggest draw for buying those packages and feels rather deceptive for new players. If you’re new to the game and unwilling to do the research, you could run smack into a wall of microtransactions when you thought you weren’t going to, and it feels somewhat nasty.

Of course, this is not so dissimilar from Anarchy Online selling a $90 character boost right before going into maintenance mode, so I’m sorry to say that it does seem characteristic, at least. Just unpleasant.

The combat remains nicely responsive, albeit a bit on the simple side at the moment; I’m chalking that up chiefly to a limited suite of options based on early gameplay rather than a system flaw. When you don’t have many skills, you’re just throwing things against the wall and seeing what has synergy. Oddly, it seems like synergy is a bit harder to find in passive skills, which is disappointing; one of the fun things about builds in the original game was finding synergy tucked away. It may just be a matter of looking harder, though.

And so I continue on my tour of Solomon Island, hitting familiar story beats and slowly developing a build, killing zombies, killing things from beneath the seas, and fighting ’round the world. There is a certain linearity issue at work here, which means my choices are rather limited.

Of course, you have many choices, but I do hope you’ll be back here later this week (now that the holiday week is over) for the next installment. Until then, you can feel free to leave comments in the comment section below, or mail them along to eliot@massivelyop.com. Next time, I might have to talk about the X-Files, if that’s your thing.

Welcome to Choose My Adventure, the column in which you join Eliot each week as he journeys through mystical lands on fantastic adventures — and you get to decide his fate. It’s not that the early areas in a game shouldn’t be charming, mind you, but perhaps they shouldn’t be the most charming thing you have going.

When your theme is Lovecraft, you have to be in New England.

Thank you! I never could properly verbalize why I thought Kingsmouth/Solomon Island was the best areas in all of Secret World, you just hit the nail on the head: it feels REAL! Thank you for that!

I’m not going to disagree with your assessment of Kingsmouth and its residents. It’s pretty accurate.

I think it’s intentional, though, and fits the setting. You’re a secret agent wandering through a disaster area. These are survivors that might be dead soon. You’ll be moving on once your assignment is over and will likely never see them again. This isn’t a hub city for the game or the world. It’s just the first piece of a puzzle and the people who are still alive there are little more than parts of the scenery to a being like the players are in SWL.

That might seem callous, but that’s the world the game built up. It gets worse and worse as you progress through the zones, too. This is a cynical world with dark secrets behind every seemingly gentle face. Psychopathic monsters roam this world covered in human skin. No one you meet in New England is innocent. They’re all stained in some way or another.

Oh, not in Utica. No. It’s an Albany expression.

this is like obviously not the intent of the column but i have to take like super offense to the snipe at norma creed. shes not a “quirky character,” shes an older woman who has been browbeat by society into believing that her true interests (literature and greek myth) are worthless and that she should be an obedient housewife who consumes bland television. she thrives in the zombie apocalypse; her remarks about her Sisyphean quest are her coming to terms with this part of herself — now that she faces something much more openly violent than societal norms, she is able to muse on what she has neglected.

You hit the nail on the head for me when it comes to Secret World’s storytelling. The characters are all super mega ultra radically quirky that it starts becoming hilarious, even when it’s trying not to be.

Your opening paragraphs here remind me of this picture I took back in June.

I grew up spending my summers outside a small town in rural NE Pennsylvania. Kingsmouth TOTALLY brought those days back for me. We didn’t have the sea, of course, but a large lake provided enough nautical ambiance that there was still a lot of resonance. Plus, of course, the omnipresent draugr heightened the similarity. It made me weirdly homesick.