END_OF_DOCUMENT_TOKEN_TO_BE_REPLACED
Although the studio makes other games and each has a presence at Hi-Rez Expo 2018, there’s no denying that SMITE was the star of the show. Fans were excited for the big world championship tournament as well as announcements about the MOBA’s development.

And the expo delivered on both counts. EUnited brought the SMITE trophy back the the US for the first time in years, while devs shared some info about the upcoming Season 5.

I sat down with Executive Producer Chris Larson and Lead Designer A.J. Walker to get more details on the new conquest map, the new pantheons, community feedback, and the next adventure mode.

The art of battle

SMITE obviously isn’t all about the art, but the art is important in the game, not just as an aesthetically pleasing background to the action but as a part of the action. For the new 5v5 Conquest map, Walker told me the changes are intended to improve it both thematically as well as functionally, arguing that the new art has meaning. Larson explained that the new elements, such as the rift in the middle of the map between the Chaos and Order sides and the new symmetry, allow players to more easily orient themselves. He elaborated,

“One of the very important things that we wanted to make sure was, if you’re in the jungle, you want to know where the lanes are in relation to where you are facing. So we added some elements to the map so you always knew [where you were] and knew where the objectives were.” 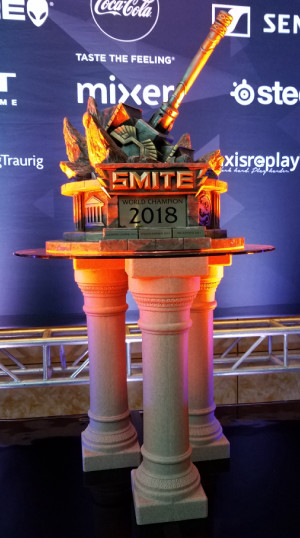 The new map’s size and shape also addresses pacing issues. Walker discussed how the team was looking at the numbers — valued for killing monsters, XP gain, and gold gained — to improve things over Season 4. He noted that many players felt Season 4 was hyper-accelerated in the beginning, making it feel extra punishing if any mistake was made then. For Season 5, pacing is altered. “We are looking at ways to increase the tension and the stakes as the game goes on,” Walker said. “We’re doing a little bit of a shift there to make the map feel a little more of a consistent pace as opposed to coming out of the gate at a full sprint and just being flustered. We focused a lot on that.”

In addition, the very nature of the ground is improved. Larsen said that the ground is more neutral, so it doesn’t clash with seeing effects of the gods’ abilities and players can keep track of the action better.

As far as aesthetics, the new map does look great. Although I did not personally play any on them (I’d have died a bit too quickly to get any impression!), I was standing over the shoulders of those who did and watching on a big screen to explore and get a feel for the changes. And let me say, it really is beautiful. You can readily see which part of the map you are on thanks to the theme, the details on the mobs is great, and the fog really added some tension and an air of uncertainty to the jungle.

Larson stated that the update to the art style includes adding more lore in the map and giving it more ambiance and a fantasy feel. As Walker put it,

“[We] wanted to focus on the map from a Greek mythology standpoint, but also wanted to bring in actual official SMITE lore and the story that we’re building within SMITE — giving the gods purpose for their fighting and giving the world purpose. That’s where you see the new chaos side, the underworld rising: This ties into our whole apocalyptic world event.”

For anyone thinking the map is the pinnacle of maps, well, it isn’t. The devs were quick to point out that it isn’t perfect. It’s not even completely ready to launch yet. Larson noted that the build on the show floor isn’t yet optimized. “The goal is to make sure the map performs equally with the Season 4 map if not better,” he said. The map is on schedule to be released on January 30th, but even then tweaks and balances are expected.

“This is the beginning of a new time for SMITE,” Walker explained. “We very much expect to have to make changes to this map for it to grow and change over the year and for years to come, just like our previous maps did.” Internal testing is still just starting point, and getting players onto the map exhibiting massive creativity will put the map through its paces and give the team an idea on what needs to be tweaked and changes.

The keynote announcement of adding two pantheons this year was met by excitement in the crowd. Two pantheons does not mean two full new sets of gods from each, though. Keeping with a major pantheon is actually pretty restrictive; Larson explained that for a full pantheon, you work to fill out the whole roster, adding gods for the various roles. That method, however, is more constraining than the team wanted this year and prevented the studio from considering some player requests.

“We wanted just to kind of look at all the gods that people have been requesting but we’ve stayed away from because the pantheon is not deep enough to have enough interesting characters that we wanted to bring into SMITE. The way that we chose Slavic and voodoo is, well voodoo is just going to be cool right? You can just imagine all the awesome characters that we are going to be able to create in that pantheon. And the Slavic, that’s actually probably less the dev team and more the community that has been requesting us to really dive into that pantheon.”

Walker elaborated on the restriction and noted that it wasn’t going to be an issue heading forward. He said it was an arbitrary constraint that didn’t affect gameplay in any way but was just a habit that the team is breaking free from. They can now think about specific gods to bring in without trying to develop a full pantheon:

“In previous years, we may go, ‘Oh we really want to do this god,’ but there are maybe only two gods in the pantheon we really want to do. So we would not do it. That’s not going to be the case any more. If we want to do only one or two, that’s fine, we’ll do that. And we won’t feel pressured to create a whole huge team of gods of the same pantheon. We really want to just open it up to give us the ability make just the single coolest characters we can regardless of where they come from. We want to be able to make characters in SMITE that are different from what we have already — different regions, different styles different feels, and different cultures behind them and not have to feel that we have to add five of the same theme to go with that.”

Could Hi-Rez look at things other than gods to add in as characters in the future? While it isn’t ruled completely out, Walker noted that it is important to keep the game tied together thematically. He also added that there so many more characters on the wish list that the studio hasn’t had to venture outside it yet. That said, the team has actually talked about adding monsters and such (it’s already added in demigods and folklore legends like Kuzenbo); the designers have even discussed King Arthur and Merlin. For the most part, those added flavors – like Little Red Riding Hood – come via fun with skins instead.

The Voodoo and Slavic pantheons aren’t the only way Hi-Rez is listening to community feedback and changing the game for Season 5. The fan-favorite fog is making a return to the jungle. Larson explained that it was removed very early in the game because it crippled performance on some old machines, but advancements in tech since then have allowed for it to be workable on PCs now.

Community feedback is important to to the devs. “I feel like a lot of the things coming in season 5 have at least some basis in community feedback,” Walker said, noting that the company is close to the community, and design goals and community desires really mesh well. The devs wanted the jungle to feel scarier, and players wanted the obscuring fog. Win/win!

The next adventure: Where did the fox go?

As a serious fan of SMITE’s adventures, I was pretty excited to hear more about the next one (while still sad to see Shadows over Hercopolis leave). Sadly, we didn’t get a ton of info, and the creator of the adventures wasn’t there to interview. However, we did get an overview. The next adventure is called Da Ji’s and the 1000 mobs. Basically, it will be a PvE adventure of chasing after Da Ji’s little fox to try and keep it safe from the waves of minions and bosses that it wanders into.

It will be a co-op experience, but in a very different style than ever before: This adventure will be more anime. Besides the characters themselves, the environment will also be very anime-flavored, and according to the devs, very different from anything else in SMITE. 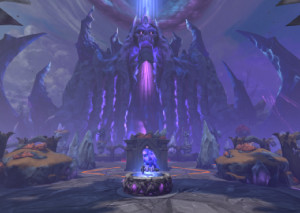 Who let the Cerberus out

So Cerberus is one of the coolest creatures ever, and I am pretty excited he is joining the SMITE roster. Folks familiar with the lore of this three-headed guardian of the underworld will find that the pooch has been modified a bit for the game. For one, the devs explained that he is portrayed with more of a personality in the MOBA. Instead of a wild rampaging beast, he has more intelligence and is aware and proud of his job as the gatekeeper, understanding that his purpose is important.

Play-wise, Cerberus is an offensive guardian. He has a heal-stealing ability and can gobble the souls of those he knocks down. He is also a really good synergy god: For his ultimate, he can toss everyone into one spot so another god can blast the group to smithereens. I am definitely looking forward to giving this god a go.

In between matches, there were some announcements made regarding e-sports for SMITE. The one that really stuck out was that all players in the league will be given a $35k salary for the year 2018 season, allowing them to focus on the job of the game.