Yesterday, Massively OP put together a piece on MMO company Daybreak Games Company and its corporate overlords, chronicling the US government’s asset freeze of Russian megacorp Renova on down the chain to its subsidiary Columbus Nova, which has for three years been the nominal owner of Daybreak since it parted ways with Sony and dropped the SOE name.

The twist? When reached for comment on the story, Daybreak informed the editors of Massively OP that our understanding of Daybreak’s ownership was in error. Stunning the MMORPG community and beyond, the company spokesperson insisted it had “no affiliation with Columbus Nova” and that former Columbus Nova rep Jason Epstein “is and has always been the primary owner and executive chairman of Daybreak Game Company” since its founding in February of 2015. When pushed for clarification, Daybreak told us that the “distinction was never corrected in the past, so [it is] correcting that now.”

Like you, we were all astonished at what appeared to be gaslighting on the part of a prominent MMORPG studio, as most of us could remember – and easily search for – all of the original documents, press releases, privacy policies, and public statements issued by Daybreak, Columbus Nova, and then-President John Smedley back in 2015 and since then, all of which made abundantly clear that Columbus Nova had acquired the whole company, as a company, and that Epstein was not the sole owner.

Subsequent research showed that what appear to be Daybreak reps have attempted to alter the company’s Wikipedia page to reflect its new ownership claims since the government sanctions were announced, earning a block from the online encyclopedia’s editors; a 2015 press release announcing Columbus Nova as the new owner that had been hosted on Daybreak’s web servers until yesterday afternoon was also apparently memoryholed by the company (don’t worry; the internet has a million copies).

Since then, the major development is that Daybreak’s Chief Publishing Officer and former Senior Vice President, Laura Naviaux, announced she’s left the company. “Moving on! The next adventure awaits…I’ll drop some info soon,” she tweeted this morning. Her Linkedin says she’s already founded a new consulting company. (Many thanks to our anonymous tipster for this info.) 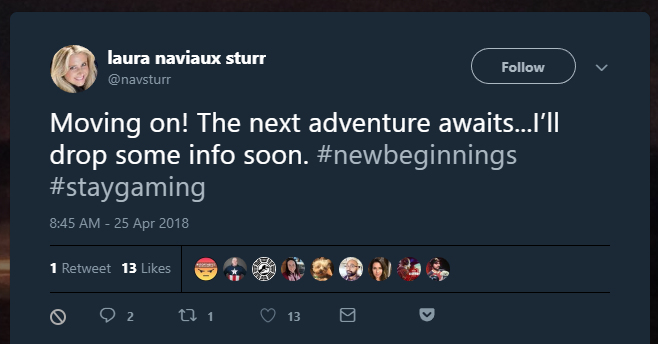 You can get caught up on the whole story (as well as the drama in the comments) in yesterday’s scoop, which we updated multiple times throughout the day as new developments hit.

During its stream this afternoon, Standing Stone Games, which develops Lord of the Rings Online and Dungeons and Dragons Online, both of which are published by Daybreak, told watchers that it doesn’t believe Daybreak’s current problems will have an effect on its games. Community Manager Jerry Snook said,

“I know that we have a big question that’s outstanding, and I can’t really talk too much about it. There’s been a little kerfluffle in the news that really doesn’t involve Standing Stone Games […] So in regard to some kind of state department-issued thing with Columbus Nova and all that sort of thing, we’re not really involved. All I can do is point you to the information that’s already been released by Daybreak Games. We’re not really involved and we don’t think it’s going to have any impact on us.”

Twitter user @MSandersonD has added more kindling to the confusion fire tonight; according to his research, not only does Epstein not own 100% of Daybreak as Daybreak claims, but Sony apparently still has a 10% stake.

A Redditor allegedly has an unnamed source inside Daybreak claiming that “employees are being reassured that its business as usual, and that the asset seizure of CN and subsequent investigation will have no impact on their jobs or ability to provide their current book of services.”

Daybreak has now deleted the 2015 privacy policy referring to CN as its parent company from its servers (the one we linked to above). A copy has been uploaded by @MSanderson here.

Daybreak has now issued a post on its own forums addressing the fiasco; there’s not really anything new here, just a reiterating of the claims it already made to Massively OP about who currently owns the company in that it’s standing by the baffling claim that Epstein has always owned Daybreak, in spite of Epstein, Daybreak, and Columbus Nova all telling everyone differently in 2015 – it calls three years of press releases and privacy policies a “miscommunication.”

The post also admits to the deletion of the documents and policy-violating alteration of Wikipedia entries as we’ve chronicled, suggesting that it’s continuing to correct its error, and it insists that unspecified “rumors” about the company are false (again, Daybreak is apparently maintaining that under the claim that Columbus Nova was never Daybreak’s owner, Columbus Nova’s financial and political messes do not affect it).

“There has been some confusion concerning Daybreak’s ownership and rumors about the state of the company that have circulated from a few online game websites, and we want to set the record straight. We assure you that these rumors are entirely false and that there’s no impact on our business or games in any way whatsoever.

From the get-go, Daybreak has been primarily owned by Jason Epstein, a longtime investor who also has investments in a variety of media properties. Jason acquired Daybreak (formerly SOE) in February 2015 and has been the executive chairman and majority owner of the company since that time.

We’re well aware of prior statements from Daybreak indicating our company was acquired by Columbus Nova. We have since clarified that the company was acquired by Jason Epstein when he was a partner at Columbus Nova, which he left in 2017. We’ve also taken steps to clarify those facts on our website and on third-party internet sites to ensure that all of the information currently made available is consistent and accurate.

We apologize for the previous miscommunication and hope that this clears up any confusion. As always, we greatly appreciate your continued support for our games, and we’ll continue to work hard to bring the best experiences to you.”

The company does not address the abrupt departure of its former VP/Chief Publishing Officer yesterday morning. It also does not explain why it represented to its players and the media that Columbus Nova had acquired it for the last three years, nor why it waited until April 2018 to correct the record.

The studio has now been hit with layoffs as of this afternoon – full details here. Further updates to this story will be in that thread.

Justin Olivetti contributed to this report.

Get caught up on the whole Daybreak/Columbus Nova ordeal:

Daybreak says it has ‘no affiliation’ with Columbus Nova, the company it said bought it in 2015

Leaderboard: Does the Daybreak fiasco affect whether you play its MMOs?

Daybreak has now been hit with layoffs [Confirmed]

EverQuesting: Columbus Nova or not, Daybreak is tying its own noose

The Daily Grind: Do you buy the Daybreak-owns-Standing Stone Games rumor?