This past week’s announcement of Fallout 76 — Bethesda’s newest entry in the post-apocalyptic series — has just about everyone in the gaming community buzzing. And while we’re sure to hear more about this at E3, one vital piece of information may have already been leaked: the release date.

When Amazon posted the game’s pre-order page, it initially listed the game as releasing by July 31st, 2018. That date has since been changed to “on or before December 31st, 2019,” but there are some that wonder if Amazon might know a thing or two that we don’t. After all, Bethesda has said that it wants to drastically shorten the time between game announcements and releases. Another theory is that the multiple Halloween references in the teaser video point to an October launch.

Fallout 76 is retailing for $60, although you may want to wait until E3 (June 12th through 14th) to find out more (including a documentary on the making of the game!). We do know that it takes place long before the last couple of entries in the franchise and has some sort of online multiplayer component. Rumor is that it’s a survival sandbox of some sort. Your thoughts? 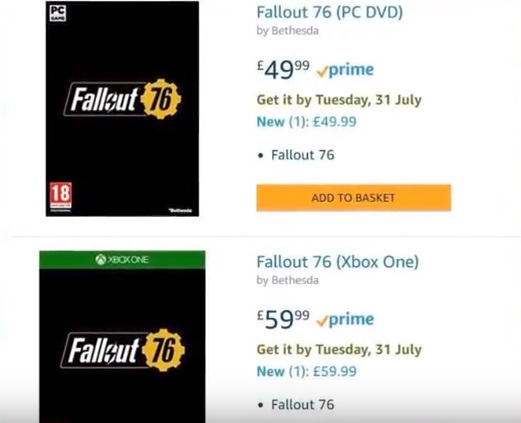