Are you familiar with Artix Entertainment? You may not be. That’s because this studio flies so far under the radar of drama that face-palming news stories just don’t happen. And that’s a good thing! When was the last time you heard of a scandal in AdventureQuest 3D or AdventureQuest Worlds? Instead, this studio appears to just keep trucking along, providing weekly content to its games and daily communication with its players.

Obviously, I needed to investigate this phenomenon and see whether it was all true or just some clever ruse developed by some alien supercomputer. So I went to the secret underground lab… in person.

Now, I’ve been on tours of game studios before. I’ve followed staff along a route, checked out work spaces, and even gotten to interview devs. But I’ve never before just visited and studio and gotten to be a part of the team for two days. And that is exactly what I did at Artix Entertainment, the maker of AdventureQuest Worlds, AdventureQuest 3D, and more. I had an introductory tour of the office (and you can watch one, too!), but after that I was more a part of the team. I got to participate in design notes, give an opinion on an idea, and be there for the big game jam kickoff meeting. I brought two of my kids along; one got to shadow the devs, while the littlest one just tried charming everyone (he pretty well succeeded, too.)

At this risk of sounding like a love letter to Artix Entertainment, let me just say that it’s more like my wish that more studios operated this way, just in time for Valentine’s Day then. I was super impressed with everything about my experience there, from the devs to the atmosphere. Just maybe not the clown. That thing was freaky! 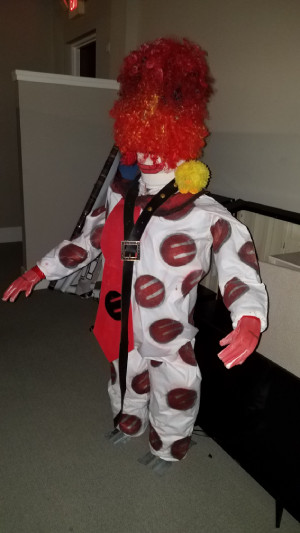 For the amount of content and communication that AE puts out, I was pretty surprised by how small the office was and how few staff there really are. Just how small? CEO Adam Bohn’s patented intercom system involves just calling out! But this close-knit group obviously enjoys working together. (Apparently even some weddings have happened among the team!) And the atsmosphere reflected that; while folks were hard at work on things, it was still friendly, fun, and relaxed. You could just feel that people wanted to be there. You might be thinking that they were just putting on a good show knowing I was there, and it’s true that they did know I was coming the first day — but the second was completely a surprise. That second day was an intensely busy one for them as well, and still the atmosphere was positive.

Two of the friendliest staff at AE actually have tails. Two adorable pups are office greeters who willingly accept pets and treats. The rest of the staff are honestly just as friendly, and might even accept treats (but I wouldn’t go about trying to pet them). You know how bubbly people are on the official livestreams? If not, be sure to check out the stream we did live right from the studio! Yah, that is really them in person, too. What you see and hear is what you get. That is refreshing.

Now about this clown. This infamous statue was left there by someone who did work on the office just to scare the staff. Now it gets randomly hidden about the office to prank others. The number of times different devs have walked into a dark office or turned a corner to face this thing is high — and there is no sign of it stopping. Coulrophobia notwithstanding, doesn’t that sound like a fun place to work? Toss in a few random skeletons, suits of armor, dragons, and plenty of toys — and a Moglin tree! — and you have AE. Oh, can’t forget all the cool artwork on the walls!

Artix’s personal philosophy about life is pervasive in his company. Honesty, dedication, hard work, taking care of others, and creating fun are all apparent in office life there. You aren’t likely to find those drama-filled stories and scandals because the company is held to those standards. No, it isn’t a fairlytale land, and not everything is perfect, but there is a genuine air of people treating others by the golden rule. Boy, do I wish this were the norm across the gaming industry instead of an anomaly! 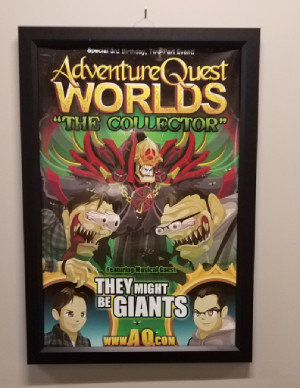 This consideration extends to players. Long before I visited the studio in person, I was impressed with the devs’ dedication to the players. At one point on one of our livestreams, Bohn (better know to fans as Artix Krieger) divulged that if players wanted something special in game, all they needed to do was ask for it. I don’t think many took him seriously, but that is precisely how cat ears, towels, and taco axes have all come about in AQ3D. I half-jokingly took him up on this challenge, and that’s how a certain DuckyDucky trobble was born. Of course not everything that players want is possible — or even good for them or the game. But if it it can happen, Artix works to make it so.

Sometimes players of games get annoyed when they think focus is being taken away from their game. I watched this happen when complaints arose about AE’s week-long game jam project. Having been there for the kick-off and that first day of work, I can attest to what a great thing it actually was for the team and the games. This was an in-office retreat meant to stimulate their creativity and stretch their skills in new ways. How does this not help the games? And you get fun other games out of it, too! What I don’t think some people realize is that devs need breaks and motivation as well. This mental break from the usual helps them to see things from different angles and solve things in new ways. And hey, some of that definitely directly benefited the game: For example, how AQ3D is now playable in a browser.

Was I impressed with Artix Entertainment? Yes, yes I was. Even more so after visiting the studio and personally meeting the devs. And no, I was not paid or coerced in any way to say any of that! It is my opinion and how I feel based on what I witnessed and my own experiences.

I’ve had people ask before about what companies they could support that put doing right above profit (I counter that doing right led to profits here anyways!) and put making the game and treating players well above pacifying stockholders and suits. If this is you, I say give AE a look; it’s one of the top three I would recommend (Digital Extremes and Grinding Gear Games taking the other two spots on my personal list). You may not be familiar with this studio or its games, but give them a try. Perhaps the games are not quite your regular cup of tea, but you might find that you also like a different drink.

And if you ever get the chance to visit the secret underground lab, do it! You will have a great time and will not regret it. You might just leave with a new appreciation for Artix and his team… just leave room in your luggage for swag! The Hero Mart is right there in the office and they print their own shirts. It was hard to not spend my next few month’s checks right then and there.

Disclosure: In accordance with Massively OP’s ethics policy, we must disclose that Artix Entertainment staff subsidized this writer’s travel to and accommodation at this event as part of a personal trip. The studio has neither requested nor been granted any control or influence over our coverage.
Advertisement