Welcome to Massively OP’s brand-new column covering superhero MMORPGs — past, present, and future! One might even say it’s a continuation of our past columns on this subgenre like A Mild-Mannered Reporter and Marvel Heroics. Eliot and I, both long-time superhero game fans, will be alternating in an examination of the games and topics in this field. With multiple titles in development and a few that are live right now, there is plenty of fodder for discussion.

It’s definitely an exciting time to be a superhero MMO fan. The death of City of Heroes in 2012 left a huge hole in this community, but its demise has led to the rise of no less than five projects that seek to carry on its legacy in some way, shape, or form. And it’s one of these that we’ll be looking at today, especially considering that it borrows so much from the long departed CoH.

I’m speaking, of course, of Paragon Chat. If you’ve heard us talking about it around Massively OP — or even seen us visiting it for one of its anniversary parties! — then you’ll know that right now this is the most immediate way to get your City of Heroes fix, even if it isn’t the full deal. So what is Paragon Chat, how do you get it, and what can you do in it? Let’s take a look today!

The idea behind Paragon Chat was to revive City of Heroes not as a game but as “an interactive chat and socialization platform.” Basically, think of Paragon Chat as a fully featured chat room that wears a City of Heroes suit. The team is quick to point out that this is not a game, as Paragon Chat doesn’t contain any combat, progression, enemies, or offensive powers. It’s kind of as if everyone had packed up and left City of Heroes when it died and then some superheroes returned to reminisce about the old days in their former stomping grounds.

It’s not as depressing as that sounds, however! The work on Paragon Chat has been nothing short of amazing, especially considering all of the features that the volunteer developers have managed to institute since the program went live. Players can not only make characters with the full City of Heroes creation toolset, they can explore the maps, use travel powers, talk in chat channels, and wield a full range of emotes.

This means that the long-standing City of Heroes traditions such as parties, roleplaying, ski runs, and costume contests are alive and kicking in Paragon Chat, as neither of those required any actual combat. While there are usually stragglers hanging around on any given night, Paragon Chat really comes alive for special events such as City of Heroes’ anniversary (which is still being remembered every April), Halloween, and Christmas.

Back in mid-2018, the team even did something that City of Heroes never managed to do, which was to give each user access to his or her own superbase (personal housing). There was even the option to import old bases from CoH, which was pretty neat.

While the team said that it had many ideas and projects for the future, Paragon Chat hasn’t received any updates since July 2018. That said, it’s still running and offers a right here, right now blast from the past. Personally, I loved being able to log in and tinker around with the character creator — which was the best part of the game, am I right? 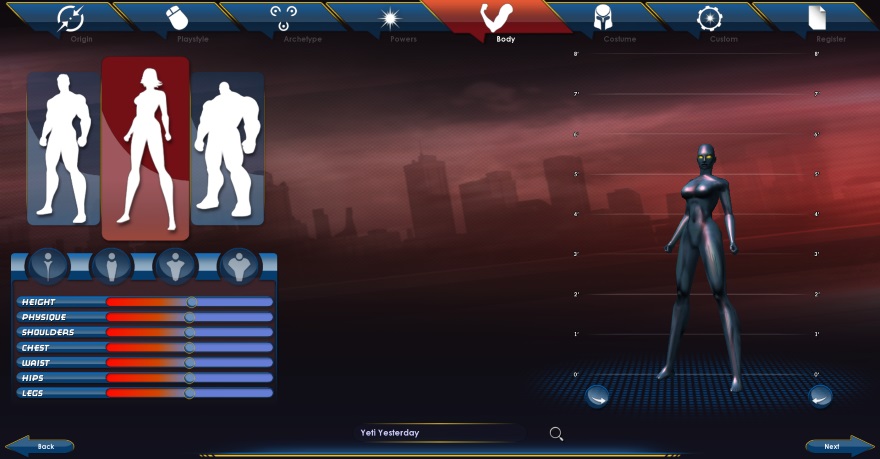 Getting into Paragon Chat

For the curious or nostalgic, the good news is that there aren’t a lot of hoops to jump through to get into Paragon Chat. The team’s set up a very simple installation page that differentiates between computers that still have the old City of Heroes client installed and (for the bulk of us) those that don’t.

While it’s installing, you should probably look over the Paragon Chat wiki entry, which contains a good overview of the features as well as slash commands and map commands (which allow instant teleports to specific zones). The Titan Network forum also has a dedicated Paragon Chat board for discussion, technical support, and suggestions. You’ll also need a Titan Network account to log in, so you might as well get that set up.

Log in, and that’s that! You’re thrust right into the City of Heroes character creator, which also allows for the Villains and Going Rogue expansion options. And believe you me, you’ll have plenty of options here. Pretty much everything from the live game is unlocked here, including all of the costume pieces, auras, and power customizations that were being sold on the free-to-play store. You’ll lose hours in this screen alone, and why not? There’s no real rush to get in and start leveling, so take your time to craft that perfect hero (or recreate your old favorite).

I had fun creating my beastly Yeti Yesterday, during which my daughter wandered over and then begged me to allow her a turn making her own character. Flipping through the visual options offered a lot of laughs, especially at some of the more ridiculous ones.

Getting into the chat client took seconds after the creation was done. I logged in on a random Tuesday night and was greeted by a handful of heroes flitting about Freedom Square as well as people talking the chat channel up. The topic du jour was badge hunting, which is another activity that Paragon Chat offers. Apparently there are 479 available badges to attain, which is keeping some players pretty busy!

For me, I did what I always do when I log into this client, which is to activate the superjump power and play tourist to my heart’s content. The instant /mapmove commands offer a much faster way than subway to get around, and I can see the potential for hours lost just revisiting some of my old stomping grounds.

There is certainly a bittersweet feeling of being a City of Heroes expat in Paragon Chat. It’s so much like the old MMO we used to know… but it isn’t at the same time. Still, it brings a smile to my face that this option even exists and is still being loved and supported by the community that has loved Paragon City and all of its environs since 2004.

It’s a bird, it’s a plane, it’s Eliot Lefebvre and Justin Olivetti covering superhero MMORPGs, past, present, and future! Come along on patrol as Into the Super-verse avenges the night and saves the world… one column at a time.
Advertisement

This game was awesome. Shame that servers are dead now.

as neither of those

@Justin – I think you meant “as none of those”, since you list more than two activities.

I’ve got a base that I log into every so often to tinker with.

It’s so archaic by survival game standards, but it was all we had and we liked it, dammit! :)

And even the modern base building is better than the tedium it was when bases released.

First time I went into Paragon Chat and started flying around made me cry. :D

Good to see some of these projects still alive. May the best team win!

This is not one of the 3 spiritual successors, rather a side project

I miss Flight. All the other travel powers were great and I loved them all, but I just really, really miss Flight. And flying through the various zones, hearing the neighborhood music (I never, ever disabled the sounds in City of Heroes). I can still hear Steel Canyon’s Blyde Square music, and that is a track that, to me, will always sound …. well, simply, heroic. My favorites, though, were in Boomtown. Many of the Boomtown tracks were peppy and upbeat and volatile and explosive sounding and very indicative of the dangerous neighborhoods they represented and I loved them all, but most especially Powderkeg.

It’s been long enough that I think I could log into the game without getting either too angry, too depressed, or both. I’ve always avoided Paragon Chat because I know I’m still way too pissed off over the game closing and I don’t want to feed that negativity, but maybe I can finally get back into it enough to fly around and revisit my favorite locations and actually enjoy it instead of getting miserable.

The Boomtown track was SO GOOD. UGH.

I’ve always been a Powderkeg fan.

Yay for fellow Powderkeg (and plain old Boomtown) fans! :D My day was made when I discovered that Paragon Wiki has a Music page with all the neighborhood tracks. I hit the site up now and then just to listen :) For so many other games I’ve had to disable sound (ESPECIALLY music), but I never even considered doing so in CoX. They got it perfect.

We devoted an entire episode of Battle Bards to CoH:
http://battlebards.libsyn.com/battle-bards-episode-53-city-of-heroes

The Wagadu Chronicles plans its first alpha test for sometime this...

The Daily Grind: Do you have any real-life foibles you carry...