Previously on Warframe of Mind I extolled the virtues of Warframe’s Chains of Harrow mission. It definitely deserved praise: I loved the spooky, intense atmosphere and the Halloween-esque story behind it all. But as I mentioned at the end, there was more to the story than that. Many folks familiar with autism could see this represented in Chains of Harrow. I also saw this, but I also noticed mental health representation as well.

END_OF_DOCUMENT_TOKEN_TO_BE_REPLACED
Digital Extremes’ support of mental health charities is no secret; TennoCon 2019’s official charity was the Canadian Mental Health Association, Middlesex. So it shouldn’t surprise me that the studio would incorporate some aspects of the topic in the game. However, I am unsure whether this was done on purpose or was an unintentional side-effect of the atmosphere. With it there, whether intentionally or not, does it stigmatize, or does inclusion help spread awareness? What will players take away from the experience, if they note the connection?

A tie to autism

If you haven’t played through the mission or seen the streams, there will be mild spoilers ahead, so read at your own risk.

During my first Chains of Harrow playthrough, it was not hard to see the ties to autism. You listen to interactions between Rell and his mother where they discuss how different he is from other kids, how he has difficulty with social interaction, and how he cannot match facial expressions to emotions. These match the common core features of the diagnosis, which are persistent differences in communication, interpersonal relationships, and social interaction. However, it is important to note that Autism is a spectrum with much variation. Austistic folks can be non-verbal or verbal, high- or low-functioning. Other cues could be repetitive motion, atypical nonverbal communication, and holding fast to routine and structure while eschewing change. Rell exhibited repetitive sounds (echolalia) with the rap, tap, tapping that would send chills down your spine.

So yes, with those flashbacks I can see Rell as autistic. However, that is not what I felt was represented in the present-day parts of the mission. From that, I got a portrayal of mental health issues. 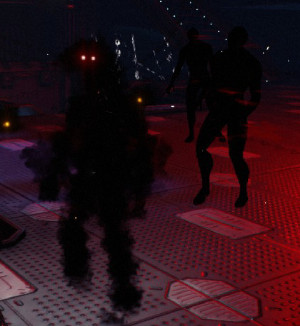 As I experienced it, there are three ways I could take the modern-day parts of the mission, two of which are steeped in mental health. First, you could follow the comments of your guide that the entity is not Rell in the slightest; rather, it is something that took over and either ousted Rell completely or completely dominated and buried him so far down Rell couldn’t get out. Evil things out in the Void messing with this poor operator who couldn’t sleep through the torture? Yes, I can totally see that.

If you discard the idea that the entity messing with you is something entirely different from the Void that took over Rell’s body, you can still get a similar take — just one that is Rell himself. Maybe an entity did mess with him, or maybe just being in the Void all those centuries, but the outcome was dissociative identity disorder instead. Formerly known as multiple personality disorder, DID is about completely separate personalities living within one person. Perhaps Rell is still there, pushed far down in his psyche, and the dominant personality is this Man in the Wall. As symptoms usually develop in response to a traumatic event, this seems pretty fitting as well. I’d call being awake forever in the void traumatic, as the whole ship descending into madness and the death and destruction aboard it. Can you imagine if Rell saw his mother — his one rock and protector that gives him a lifeline — destroyed?

The third possibility is the one that struck me the strongest. I had the distinct impression of schizophrenia when I played through Chains of Harrow. I say this because of a unique perspective I have on one aspect of the mission: the voices and whispers throughout the experience. Those very voices and whispers echoing in your head made doing simple tasks more difficult, a fact you can see over an hour into my first stream.

This phenomenon is not new to me: In my work as a mental health professional we had special training where we used headphones to listen to a long stream of words and sounds from multiple sources that approximated the experience of schizophrenia. Then we had to perform a variety of tasks before being sent off on our own for a time. Let me tell you, the ability to do simple tasks was seriously diminished; it was hampered even more if a person was there giving you external instructions. It was so hard to ignore the voices telling you how bad you were (though there were nice voices as well) or the steady heartbeat that would get louder and louder. You had trouble filtering out your own thoughts.

Chains of Harrow, with its use of a number of sounds and the voices, reminded me of that training more than I thought I’d ever experience in a game. Another support for this theory is that much of what you experience can easily be the projected hallucinations and/or delusions of Rell.

Shining a positive or negative light?

Anytime something atypical is put out there, such as mental health or alternate abilities, there is worry that said representation will reinforce negative stigmas. For instance, if folks took the idea that Rell was autistic and then equated what happened in the mission to what autistic people are like, that would certainly be a bad take. And there are probably some who did exactly that. The same with folks thinking that those suffering from DID or schizophrenia are homicidal maniacs because of the situation, further isolating those with real mental health issues. But we can’t let that fear keep us silent. The problem is silence!

The stigmas and stereotypes live and grow in ignorance and silence. Those are already there; many people’s fears have been founded on not knowing. With inclusion and representation, you are breaking down the barriers of silence and ignorance. Perhaps only those with some experience in the matters — be it personal professional, or from family — really see that aspect coming through and relate to it, like my noticing schizophrenic elements. And maybe this leads to conversation and research for those who aren’t as familiar. Tasteful portrayals and representation can have a net positive effect. And I think Chains of Harrow was well done: It never professed to be something, but it laid out clues. And throughout, you get to feel some empathy for Rell and his experiences.

I still don’t know whether the ties to mental health were intentional on Digital Extremes’ part or not, but I appreciate that it has been able to spark a conversation. More awareness is always a good thing.