New World alpha testers are in for some fun this month as Amazon Games Studio is rolling out its test patch for January, and this one’s focused on the upcoming MMO’s crafting system.

“We’ve made major changes to increase the number of items players can craft and added additional functionality to the crafting system,” Amazon writes. “The main goal for these changes is to keep crafting and gathering relevant through end game, while adding more depth, a new interface, and more interesting choices in the crafting system.” It looks as if players can look forward to new crafted named items, rare and typed mats, new recipe unlock methods, a level 200 craft cap, and an overhaul to the procedural crafting system meant to “give players more control and flexibility over custom crafting.”

The update also introduces the rapier skill, gobs of unique weapons and armor pieces, better repair mechanics, hefty tweaks to the food mechanics, tweaks to elite enemies, improved visual models for some mobs, and adjusts enemy AI. You can read the whole set of patch notes over on the official site.

Most people just used the 3rd slot for a life staff anyway. No real loss there.

I’m good with the rest of the changes. Most sound great, some merely OK. Overall, solid progress.

tried to log in last night and said I was 837 in queue and Est time would be 73 days
My reaction was “73 days to what release?” LOL.
great world, good game and only getting better with every patch.

Reduced the number of weapons a player can equip from 3 to 2.

Now reduce it to 1 and give us real skills that don’t depend on weaponswitching and make me happy.

That’s kinda stupid though, people should at least be able to have a melee weapon and a ranged weapon.

Reduced the number of weapons a player can equip from 3 to 2.

Good! A little less ability spam and a little more situational decisionmaking needed. Not to mention how dumb it looked to have a musket, shield, great axe and comically-oversized war hammer on your back at the same time.

I am in Alpha, I got invite recently. And also played in open beta when it was available for everyone. And so far I don’t see any major changes to gameplay – it’s still boring “kill dumb NPCs by rolling back and forth” (you can literally do this without turning, by using touchpad on laptop instead of mouse, which is what I was doing), “collect this stuff and bring it to that place” and “grind crafting by creating bunch of items which nobody will buy from you once the market is saturated with them”. I’m sure some people do enjoy this type of gameplay but this is definitely not enjoyable for me and I honestly don’t see many people enjoying doing this for a long time, including pretty meaningless territory control (you can’t evict players of other factions from your territory or prevent them from going into your faction’s territory or build anything interesting on territory your faction controls) or instanced small scale “wars” on schedule. My personal guess is Amazon will shut this game down within the first year and just move all the people to their LOTR game they are working on. 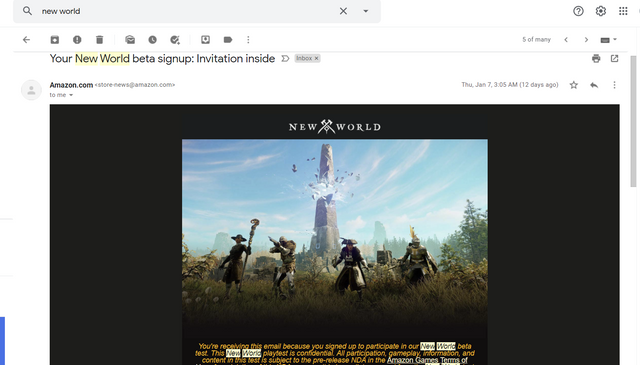 What level are you?

About lvl20. I could always kill all NPCs even few levels higher than me just by dodge rolling as long as there is plenty of space to do it. Once you practice dodging few times – all the NPCs near your level become annoying timesink you must suffer through to level up.

I remember during the preview the difficulty curve really didn’t get going until after level 35. The mobs don’t necessarily get smarter, but you run into more ‘silver’ mobs (including entire areas of them, with ‘gold’ mini bosses) and mobs in general get more abilities and seem to work together more effectively.

I hear you on the annoying timesink part, though. My main concern is that complex combat—even if it’s not ‘hard’ combat—doesn’t really lend itself to grinding shit in MMOs.

They really needed new crafting items. I wish I was in the Alpha :(

Said game has come a long way and I’m very excited for it to be seen by more folks and launch.

I think that their best bet would to be keep doing what they’re doing (adding in more content, tweaking systems and improving existing systems) and stick with their current launch date. If they do that they’ll have a really good game on their hands.

I think they’ll stick to their launch date, but the real question is whether they’ll continue development like this post-launch or immediately roll the team over to the LotR MMO.

Game is certainly moving in the right direction, and at a steady clip.

Wish they would add more people in. :(