Gaming monetization has been a topic of intense conversation ever since box copies of software diminished in favor of persistent online experiences. Subscription services entered the scene but presented the problem of a monthly commitment to the unknown. Then we got swarmed with free-to-play titles and the introduction of cash shops and designs intended to push players in that direction. In the current iteration of gaming monetization, random lockboxes aka lootboxes, no longer exclusive to the mobile market, have become a lightning rod for intense feelings and lawsuits alike.

As a free-to-play naval arcade, World of Warships has continually sought to maximize profit, even at the expense of the well-being of its own players, and studio Wargaming has now begun to push away some of its most ardent defenders and contributors with its aggressive gambling mechanics.

How does a game that bills itself as “free” pay the bills to keep the servers running? Warships did it quite successfully for several years by selling premium time (akin to an MMO subscription with credit and XP earning bonuses) and premium ships. While players can quite happily grind free tech tree ships by playing matches and earning XP and credits, the serious cash was made by selling unique ships and bundles, sometimes for upwards of $100-120 for a single ship and a few shiny extras. It was pricy, but at least players knew what they were spending money on.

Unfortunately, at some point along the way, marketing blurred with psychological exploitation.

As recently as 2018, the World of Warships summer sale sold premium ships directly to customers at a discounted rate. This year’s recently announced summer sale entices players to buy doubloons, which can in turn be exchanged for bundles that include summer tokens, which in turn can be exchanged for random crates that may contain a permanent camouflage (for a ship that you already own if you’re lucky) or spent on a chain of random crates at a discount – though a discount from how much is unclear.

So why has the situation spun out of control? Wargaming wants to remove players’ perception of value as far as possible from actual money because it’s more difficult to get people to gamble if they know how much they stand to lose. This slow push toward gambling mechanics has been occurring for several months but reached a breaking point within the community this past weekend, precipitated by the re-release of the USS Missouri.

Wargaming originally put the USS Missouri up for sale in December of 2016 for the game’s freeXP currency (acquired through in-game play), and the ship remained available until February of 2018. Within the game, the Missouri is not a behemoth by any means. It’s widely recognized as an average battleship with a few unique perks. The biggest differentiating factor is an enhanced credit modifier that increased the number of credits earned per battle. Over the months that Missouri was available, more and more players took advantage of the credit bonus to the point that it was disrupting the in-game economy, prompting Wargaming to pull her from sale. Since then, Missouri has been available only via random containers centered around special events. Or perhaps the containers were not-so-random, depending on your viewpoint.

The existence of the Missouri presented Wargaming with a dilemma. She’s a ship of great historical significance (Japan signed its surrender on the deck of the ship in 1945), and as such she has been sought after by many veterans and those with an interest in naval history. Not a company to leave money on the table, Wargaming recently announced the return of the Missouri with great fanfare – and a reduced credit modifier. The studio specifically said the ship would be “available for purchase in exchange for Doubloons” (the game’s cash-buyable currency). Previous owners of the Missouri would then continue to earn credits at the enhanced rate. It seemed a reasonable compromise to those who desired to own this unique piece of history.

Unfortunately, when the development blog for update 0.10.7 was released, the wording in the section regarding the return of the Missouri had been altered. The new version made clear that the ship would instead “appear in random bundles that can be obtained in exchange for Doubloons.”

In other words, Wargaming had gated the Missouri behind random crates. If history serves as any indication, it will likely be a random bundle “chain” with the possibility of winning Missouri in the first crate in the chain, the last, or any crate in-between. Thus, if a player wants to own the Missouri, he will have no idea how much he’ll need to pay to get it. This type of chain directly manipulates players into the sunk cost fallacy, or the tendency to continue to spend money on something simply because a player has already sunk so much into it that he doesn’t want to walk away without something to show for it. 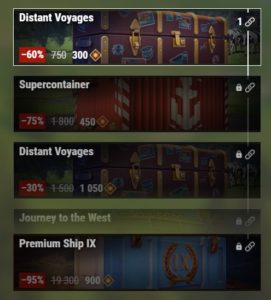 This latest monetization move sent the official World of Warships community contributor (CC) community into a frenzy. An environment that had already been deteriorating over the last several months completely disintegrated over the Missouri announcement and other mistreatments. This past week, we received tips that many of the game’s largest North American and European community contributors had discussed a mass exodus from the program to coincide with the re-release of the Missouri. However, that timeline moved up to last Friday, when Little White Mouse, a long-time ship reviewer and much-beloved community member, announced her resignation from the program.

By Saturday morning, no fewer than 22 other members of the program had done the same. Those who have left continue to drop hints about additional departures over the next several days.

YouTuber The Mighty Jingles, who is such a community cornerstone that Wargaming has made him a playable captain within the game, cited “aggressive monetization,” gambling mechanics, and toxic relationships between the company and its contributors as reasons for his exit:

So in today's Salt Mines Discord Q&A (which will be posted in lieu of Mingles with Jingles on Monday) I announced my intention to quit the World of Warships Community Contributor Program. Once the Discord Q&A ended, I posted this message on the CC Discord and left the server. pic.twitter.com/7sHhYvALNN

Streamer Flambass penned a breakup letter comparing his time in the program to an “abusive relationship” and called for a monetary boycott of the exploitative practices.

Mr Gibbins, in his discord channel resignation, noted the problems gambling mechanics present to large segments of the Warships playerbase:

“[T]he WoWs community is made up of a high proportion of veterans. It is well recognised that veterans suffer much higher rates of problem gambling than the general population. Missouri is a much desired ship, a ship with great significance to many veterans. Marketing that ship to veterans through gamble mechanics seems to me to be exploitative and immoral.”

It’s worth pointing out, as many of the CCs did, that World of Warships markets its game to young kids as well as adults. The terms of service stipulate players must be at least 13 years old to play, which means that these mechanics are being introduced to children who are too young to legally drive. The Pan European Gaming Information (PEGI) rating is 7, meaning that the game is appropriate for children aged 7 and older.

This isn’t even the first time that Wargaming has been in hot water over random crates. Consider this complaint about the randomized nature of the 2020 holiday event, when the European Advertising Standards Alliance (EASA) ruled in part, “The Jury also disagrees with the opinion expressed in the discussion that this knowledge would not affect the economic behaviour of the players. In the opinion of the jury, there is a distinct possibility that it would. For example, knowing the pre-condition (of owning one of the 4 ships) might make a player NOT buy a gift container.” In other words, the more educated the player on the chances, the less likely she may be to spend money on a gamble. Wargaming instead prefers to keep players guessing on both chances and value through multiple digital currency exchanges and complicated random crate reward systems.

At this point, Wargaming seems content to continue to take chances on aggressive monetization tactics and ask for forgiveness if it doesn’t work out. But perhaps that’s all part of the strategy. Player churn is good for free-to-play games, and World of Warships is no exception to this rule: They can’t sell you a USS Texas twice, but they can sell it to an excited new player who just discovered the game. The new player will have no history with the studio to know better. It’s disheartening to think that this type of exploitation resulting in community upheaval may not negatively affect Wargaming’s bottom line in the least.

Then again, maybe it will. 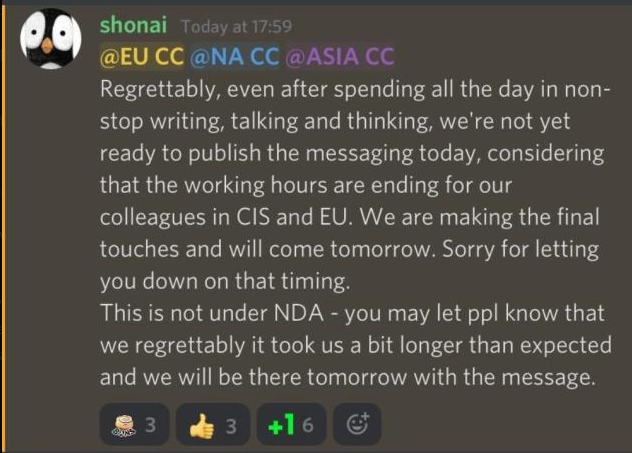 Update: It seems that players who want to purchase Missouri with doubloons are going to be forced to contact Wargaming customer support in order to do so 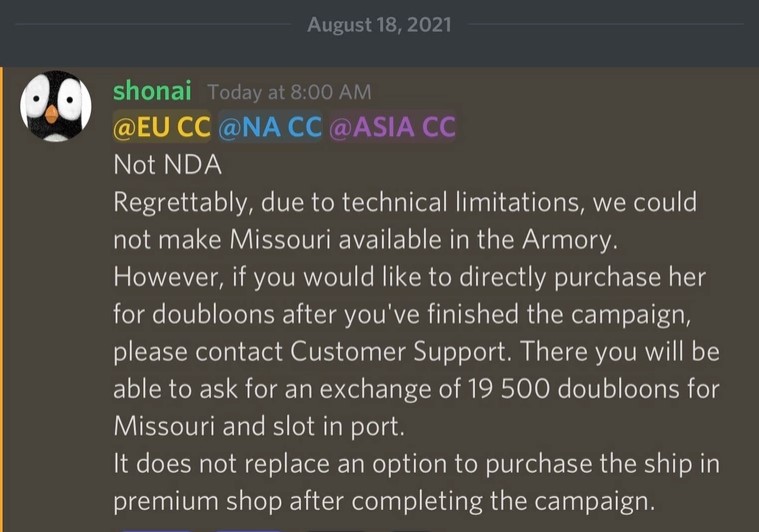