Back in 2019, Pearl Abyss announced a slew of new MMOs, including Crimson Desert, Plan 8, and DokeV, the last of which was being called a “collectible MMORPG for all ages” by the studio. Unfortunately, following last night’s trailer reveal of the game at Gamescom, the studio made clear that DokeV not only won’t be an MMORPG, but it won’t be an MMO either, though based on the promo materials, it will still include co-op – we just don’t know how massive it will be. 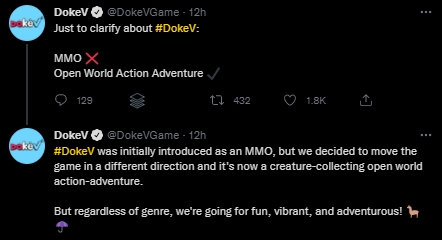 Readers will recall that Pearl Abyss also called Crimson Desert an “open-world MMORPG set in an epic-fantasy world” during its reveal, but it has also been scaled back to a multiplayer title with single-player components, as we learned last year. Crimson Desert has also been delayed from its originally planned 2021 launch.