Those of you reading this probably know me as someone who wears one of three hats here at MOP: a news writer, the Choose My Adventure columnist, and one of MOP’s streamers. It’s that third job that I wanted to talk about here today, specifically about the recent #DayOffTwitch boycott that happened this past Wednesday, September 1st. I want to talk about the impression it’s made and my thoughts on the whole ordeal.

First, the impact: There’s a story out there that notes viewership of Twitch on the boycott date dropped somewhere between 7% and 12%. On the whole, that’s not really much of a dent in the grand Twitch scheme, and it sort of illustrates my concern that this boycott was not a particularly good idea, even if it had the right intentions. And this is coming from someone who took part in the boycott for MOP’s own streaming group with the full support of our lead editors.

The thing about a boycott is that it needs a huge, critical mass of people to send a message to really make anything close to resembling any sort of impact, and that demands a significant level of coordinated effort. This boycott didn’t have that. It’s hard enough to get a group as varied as livestreamers to agree to anything en masse, on the internet or otherwise. So in that regard, I’m not really surprised that this didn’t really place the smoldering crater on Twitch’s landscape that some had hoped. 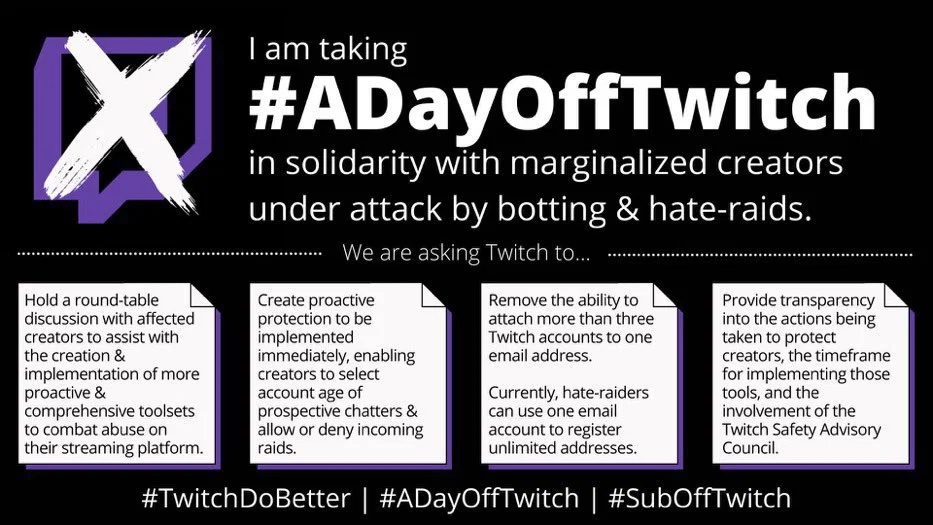 It’s important to note that it’s very obvious Twitch itself has serious problems. As a company and a platform, it has been demonstrably lacking in addressing the plights of marginalized content creators in spite of it claiming it wants to be a platform for all. The problem of hate raiding and harassment is so proliferous that one of Twitch Gaming’s own broadcasts suffered the same fate. And Twitch’s “answers” barely qualify; one video succinctly illustrates that automated moderation – particularly with the current restrictions the platform has in place now – is not an answer. This has to be addressed by actual humans with blood running in their veins.

That said, I think it might’ve been better idea to have people flood the platform with talk about the problem. It could’ve been a day for multiple creators – especially the large ones – calling out the problem, talking about it, or maybe even discussing ideas to combat it, and others spreading that around by hosting or flooding social media, making the hashtag trend on Twitch and elsewhere. That probably would have made a stronger impression on both the industry and on Twitch, or at least had a better chance at making an impression and putting pressure on the company. But then, that would have required just as much coordination if not more.

So that brings up the question of why anyone should even bother, and to that I’d say it’s because everyone, no matter the race, gender identity, or sexual orientation, should be denied the fun of sharing gaming or art or other things on Twitch, and the fact that some folks are being denied by assholes circumventing the piecemeal protections that are in place needs immediate attention. Seriously, streaming is a good time, and everyone should be allowed to engage it in, despite what certain dank corners of the internet would prefer. That’s worth raising a stink about.

And why did I participate in the boycott if I felt so strongly that it wasn’t the right angle? Because MOP, and by extension OPTV, is nothing without the readers and viewers. We are supported by our readership, quite literally. And while I felt like it was better to talk about it during my planned broadcast on the 1st, I thought it was more important as a writer for a reader-supported independent website that I defer to what those readers and viewers thought. Considering the results of the poll I put out posing the question, I think it’s clear that there is a semi-split opinion on what to do about Twitch’s lackadaisical moderation efforts.

So I took part. But I’m not happy about it.

What’s more upsetting is that this whole matter already seems to be sort of slipping out of range of the greater discussion radar, at least perceptibly. Most people feel as if passive activism is enough, and perhaps there are some who feel that they can pat themselves on the back, but as a guy who loves his husband and enjoys feminine things, I’m far less proud of what happened. And I’m not even in the major target of hate raids; I can’t even begin to get close to how Black people, POC people, and openly proud trans people and LGBT+ streamers must feel now. I can hide in plain sight if I need to. I’ve had to before. I know how to “play it straight.” Not everyone can. And frankly nobody should.

I don't disagree, but I still lean to the hopeful side of things regardless. It's better to try and fail than sit idle in cynicism. pic.twitter.com/uUe6kpQHw5

This isn’t to say that the idea was bad or that people who did take part or didn’t take part were bad. I’m also not saying the readers and viewers were wrong in asking OPTV to join in the boycott. And it should be noted that Twitch has reportedly put out an email to casters promising new tools, while Streamlabs has included a “safe mode” that disables recent events and shuts off raids and alerts, so the issue is at least starting to make some waves, even if I’m still suspicious that Twitch is just serving up more empty platitudes here.

I suppose what I’m saying is that this reaction was poorly thought out, and the fight against this shouldn’t stop with just one measly little day of going dark on Twitch, especially if such a small percentage of streamers doing so still managed to prompt a PR email. It’s going to take something greater than a hashtag and a boycott attempt to combat this issue. It’s going to take much more, from many more, and for a far longer span of time.