We’ve talked about Mario Party a few times on MassivelyOP, but only recently, as the Mario Kart series is both older and probably more familiar to readers when we need to discuss party-based games with fair catch-up mechanics. That being said, what’s more of a party game than the MP series and its crazy board game/minigame hybrid system? While Super Mario Party eventually added online play years after its launch (most likely due to COVID making local multiplayer riskier business), Mario Party Superstars is the first title built around and launching with an online multiplayer option.

Although MPS is basically a “best hits” HD collection with online play, it outshines a lot of the previous games and may be among my favorites now. Admittedly, I’ve mostly played the first few of the original games and the last few, but for good reason: The series was in decline. Long games that could have fairly random winners isn’t fun, especially when you’re forced to play minigames that don’t feel well balanced, but Ninendo’s made some tweaks to fix most of those issues. 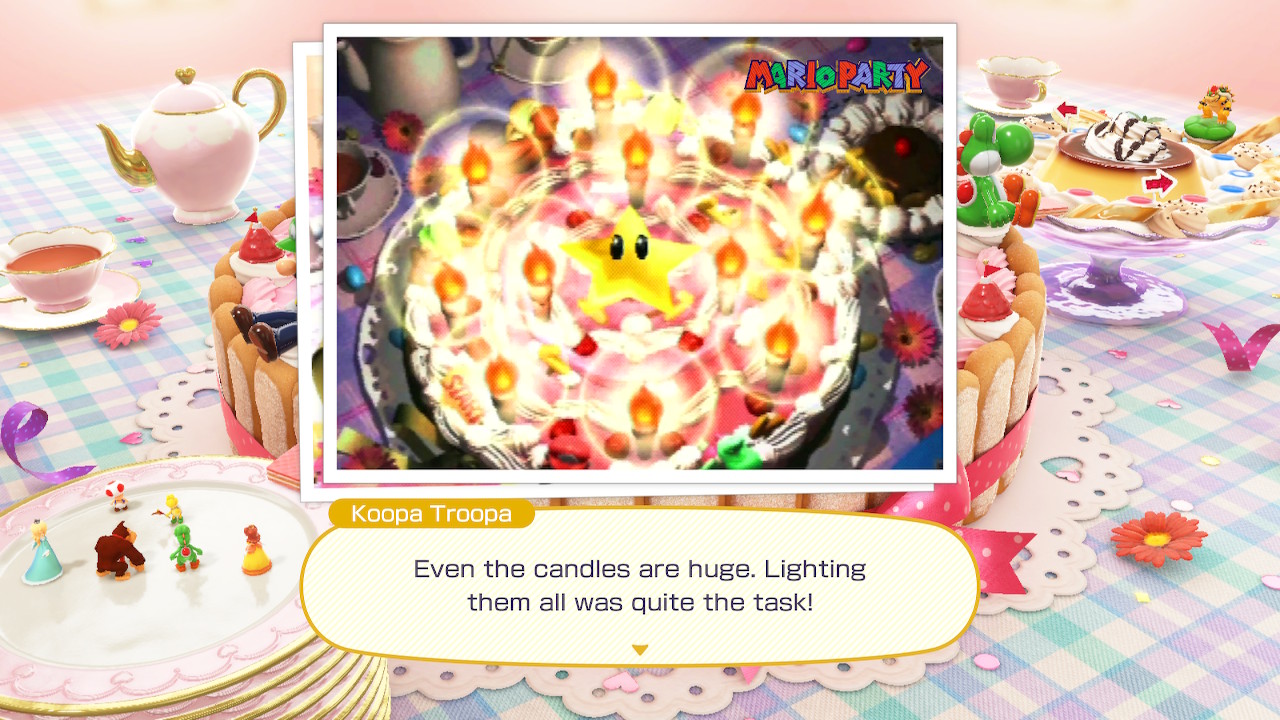 For those unfamiliar with the series, Mario Party is a digital board game for up to four players. Players take turn rolling dice and attempting to collect stars. During player turns, not only will they roll the dice, but they may also use items with effects, such as nerfing another player’s dice, increasing their own rolls, stealing items (including stars), or manipulating the board. The spaces players land on or passes can give/take coins, allow them to purchase a star, buy other useful items, start a minigame or duel, start an event that will manipulate the board or player locations, or start a Bowser minigame (more on that later). The game ends after a set number of turns, which the players choose before starting, but may be extended mid-game if they so choose, with late-game bonuses automatically being rescinded.

The game is fairly light-hearted. There is some strategy but also randomness. The game also tends to give a bonus to struggling players during the last five turns of the game, and before a winner is declared, the default settings award extra stars for activities such as having won the most minigames or landing on the most Bowser spaces. Bowser spaces are particularly interesting, as they often (but not always) punish the player who landed on them but may also manipulate the entire game, such as taking everyone’s coins and dividing them equally or shuffling everyone’s position on the board.

Combined with the fact that Nintendo took some of its most effective minigames, Mario Party Superstars feels like the most balanced and accessible game in the series. Series veterans will be more than fine, but I even had my mom try a few games, so it works for newcomers too. She enjoyed the game well enough when I was a kid, but she super struggled with minigames. While she’s still no master, the combination of showing each minigame’s controls and having time to practice (even more when offline) helped prop her up. Similarly, a friend of mine who’s not a fan of platforming games wasn’t fazed at all when she miserably lost matches she wasn’t good at. The game has enough comeback mechanics and luck that for a good deal of the game, it feels like anyone can win.

That isn’t to say that the game is perfect. The games that have you rapidly rotate your control stick may lead to joy-con drift issues faster. Some games seem as if they’re about pure luck. And when that’s combined with other random features, a more skilled player with low-loss tolerance may get upset that he’s not trouncing players who are new and just trying to have fun.

If you’re looking for a more strategic online board game, I can highly recommend Armello, especially for you Game of Thrones PvP types, but one thing that I’ve found is that many digital board games are is long, just like in real life. Mario Party traditionally is the same, but Superstars made a few tweaks. The online mode with randoms forces time limits, many animations have been reduced/cut/sped up/made skippable, and when combined with a 10 turn limit, your games often last 45 minutes to an hour, slightly less time than the shortest Armello game that didn’t involve massive luck and many unskilled players. I love Mario Party, but these days I prefer quicker games. Superstars may not have any of the highs I felt in Mario Party 10’s Bowser Party, but it moves quickly enough with enjoyable content that I’d still rank it as one of the best MP games to date.

While this column generally focuses on online mobile games, and I had very few lag issues on my wi-fi and tethering connections, I would hesitate to recommend this game as something to play online unless you’re stuck on a long-distance ride precisely because of match lengths. Although we’ve covered Monster Hunter Rise and Monster Hunter Stories 2, which both can have long missions, those feel rarer than Mario Party Superstar’s games. The game works better if you’re in online matches from home. Unlike in Armello and some other online digital board games, local multiplayer is not only possible but quite enjoyable. 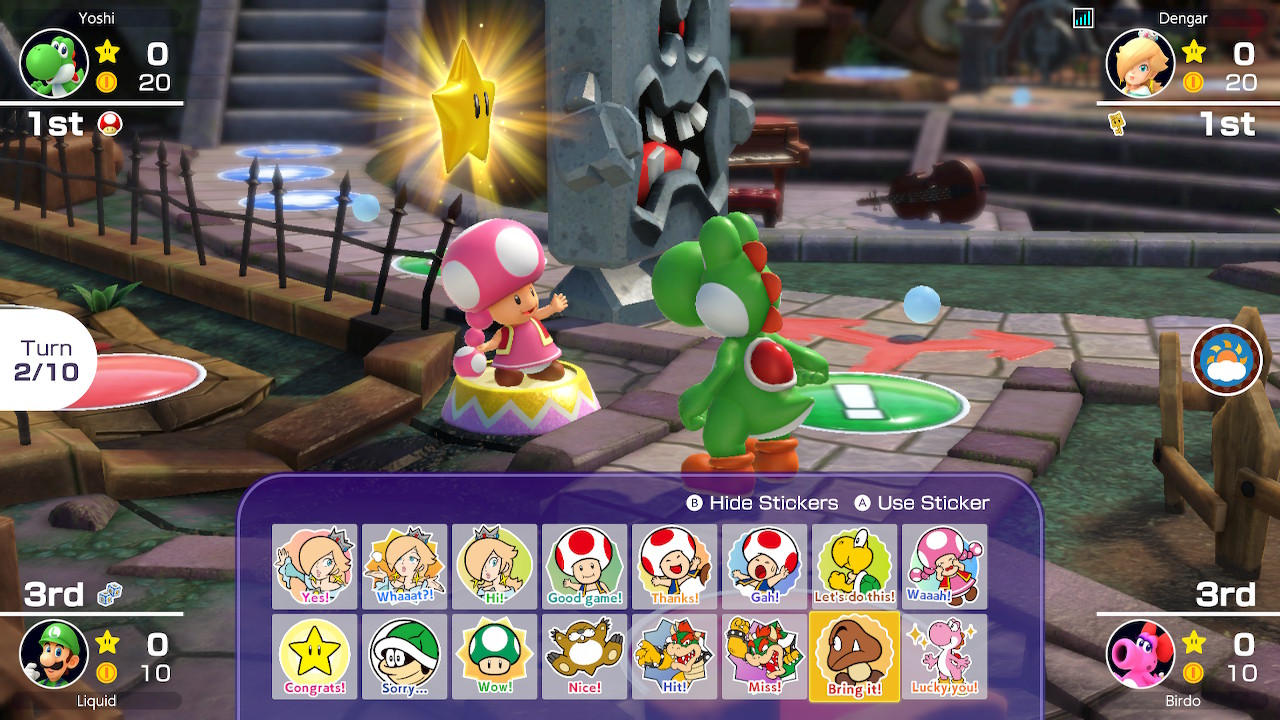 So now that we’ve gotten through the basics, let’s talk about that online play. The option to play with random people online is a breath of fresh air for those of us who love the series but have fewer friends who are into local co-op. Single-player, online co-op is oddly comfortable, largely thanks to the game’s reliance on stickers. While voice chat is an option for non-randoms, stickers still helped communicate quite well, all things considered.

During many of my online sessions, I was laughing a lot. While I was admittedly nervous about “being mean” to randoms on the internet, I think we all ended up having a good couple of games, largely in part because of the stickers. That being said, especially since I think there were a lot of younger players, if someone gets annoying, you can turn stickers off mid-game.

While a few stickers, (Like “Yes!” or a disappointed, “What?”) are mapped to the controller, it would be nice if you could map other stickers to the controllers or even just change the layout of their placement in the options. This is especially needed when using a combination of local multiplayer and online multiplayer, as the local multiplayer group is reduced to only the most basic of stickers, which can be hard to keep track of. A well-timed sticker adds so much to the experience, but missing that timing can cause confusion. For example, if you suddenly see someone say “Congrats,” you may wonder whether the congrats is for the last minigame you won or a sarcastic response because you just rolled a 1.

Finding games with randoms requires a kind of game dating profile: what rules do you want, for how long, which map, that kind of thing. You do not get to choose the types of minigames, though, nor can you set the handicap like when you host an online game with friends. If you want to make new friends that you can easily communicate with (or randoms to use the game’s more varied rule settings), social media is always an option, such as on Reddit or Discord.

Probably half my games included a mixture of local multiplayer and online play. As the With Friends option takes away the turn timer, players could conceivably take the game hostage by never finishing their turn, but I never encountered that. Slow players were a bit annoying, but that happens with physical board games as well. 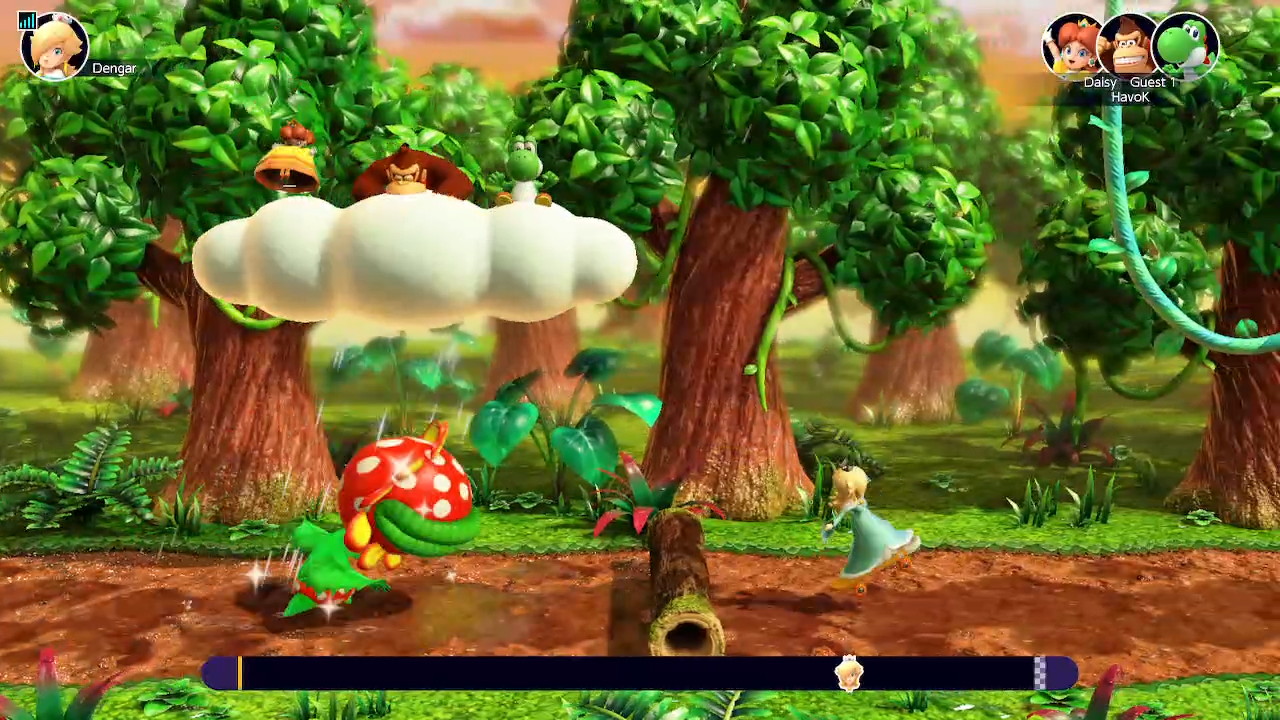 Board games aren’t the whole of Mario Party Superstars. Minigame lovers have Mt. Minigames, which is devoted to… well, you get it. Skip the board and dive right in, with online and local multiplayer. Think of a Time Trials combined with multiplayer. You play against other people, but your scores are also compared to other people online, such as in Survival, where you see how many times you can be the last person standing in a stream of mini-games. Sadly, stickers cannot be used on the Mountain.

You can play whatever you want in Freeplay. The Daily Challenges select three specific minigames and give the winners stars, and whoever wins the most stars wins the set.

Tag Match and Trio Challenge cannot be done with randoms online. You must do them either solo offline, via local multiplayer, or in an online Friends room with enough players to participate. Tag Match is similar to the Daily Challenges except it’s 2v2 minigames among friends. Trio Challenge, though, sets you into 3v1 minigames. It’s up to three human players on one team against a stronger NPC in a series of challenges.

The previously described Survival mode and Coin Battle options are both more advanced in that neither gives you time to practice. This speeds things up but also tests how well you can remember the minigames and their controls. Coin Battle is the easier of the two as unlike Survival, it’s not all-or-none. True to the mode’s name, you collect coins to find the winner, but the final round is worth double coins, making it possible for people to make a comeback.

One final “new toy” the game introduces is a touch of personalization. The game comments on your strong points after the award ceremony, not just with charts but with specifically mentioning something you experienced, like win the most minigames or landing on the most red (bad) spots. The wrap-up picture also helps enforce this, picturing your character at least in the ranking you earned, but often also with the aforementioned experience, like holding a lot of stars or losing a bunch of coins.

Although Mario Party Superstars doesn’t reinvent the genre or series, it is an accessible online game. It’s not as accessible as Jackbox games, especially in terms of price and platform, but as people are bouncing between in-person and online socialization due to COVID, it brings the series to a more comfortable place. For older fans of the series, it finally gives us a way to play with grown-up siblings and old friends who have moved away but still want to Mario Party from time to time.